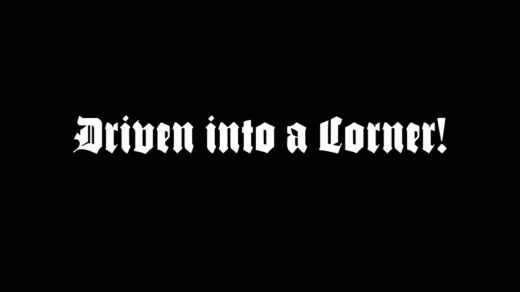 And so, the end of a cliffhanger! Spoilers abound!

Although in an effort to most quickly get a post out, I am grabbing fewer screenshots and merely capturing video from now on. I value my commentator’s discussions. That and I now work from 0800 to 1700 Monday to Friday and this is cutting into my sleeping time. The only reason I’m doing this is I’m roasting some chicken breasts for my lunch.

The episode starts off with a bit of background, as the student council team meets with the department head of what appears to be a Ministry of Education’s Culture, Sports, Science, and Technology – Academy Warship Education Department. Funny long title. Wonder how his letterhead looks like. They are essentially informed of what would happen to Ooarai, due to the fact that the ships are ridiculously hard to maintain and Ooarai was chosen as the one to be scrapped to reduce strain in these, rather hard economic times. I also wrote that in James May’s voice. Now you have to go back and read it. Mind you, I’m quite sleepy. Schools without any achievements are closed down, and Ooarai, with a decline in admissions, has only Tankwondo/Panzerfahren/etc as the only way to stay alive, and it’s that to come out as a champion.

We cut to the girls finally surrounding the student council team and asking if all of it was a lie, since they said the subsidy used to cover Panerfahren was used to cover operating costs as well, no doubt a sign of a business in trouble. I can certainly understand Momo’ s dedication to her school, the last episode’s montage of memories did show her beyond her serious side, and for once, made me realize I’ve had been in situations where a rather unremarkable thing or a place is to someone, to me it holds genuine space in my heart. The girl’s reactions to the reasons for the Panzerfahren team were all dejected, and no doubt weighing heavily on Miho. The freshmen team are taking it the hardest. Except for Autism-chan it would seem, who looks like to hold everything inside her (as fellow /a/nons have taken a liking to Saki Maruyama, the M3’s 37mm Loader). 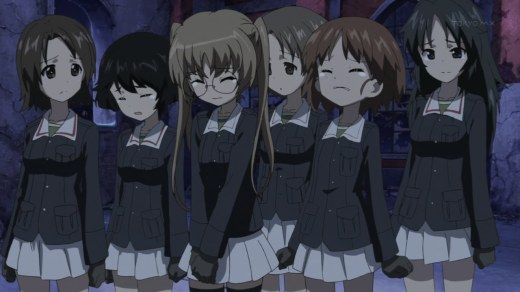 Miho though breaks through all that, noticing most likely that all hopes had always been resting on her, but also acknowledging that the girls have always been there. Sure they’ve had mishaps, but can you not ask for a better team? They’ve taken an unknown to the top. This was the spot my university (George Mason University) was in 2006 and in 2008. She is gonna coax and help her team push past the semi-finals. And it seems like Hana’s mom is slowly accepting this, or hoping for a loss to convince her foolish daughter to come back into the fold.

Darjeeling also explains that Katyusha’s complex is heavy-handed Napoleon. She loves to tower over her opponents, breaking their pride if she can’t beat them in stature. Right now I hope IkaMusume/Fangyusha would remember her exploits upon a rather small beach restaurant. 😐

It also does seem that Nonna is the true brains of the outfit. I mean Katyusha has the smarts, but seems to be weighed down by her rather strong Napoleon complex. I also need an ID on the prop-sled Katyusha is using as a  bed, made worse when Nonna sings a line or two.

And in this episode of Top Gea-Scouting. Gudarian and Rommel go marching, Sodoko calls Mako ‘Remako’, and the enemy tanks have all been scouted. The overhead shot of the town  is also quite enlightening, it shows how desperate the situation is for Ooarai, but as Orange Pekoe thinks it’s all over, Ooarai’s stalwart fan, Darjeeling, doesn’t think so at all. It also reminds me of the speculation Random Curiosity and World of Tanks had. Ooarai’s position is reminiscent to that of Bastogne, Paulus’ encirclement. But also, a breakout reminiscent of Hube’s Pocket minus the link-up with allied forces.

Even with the new strategy, everyone’s spirits seem to be down, and hating to see her friends like this, she’s taken to the only way to keep their morale up. 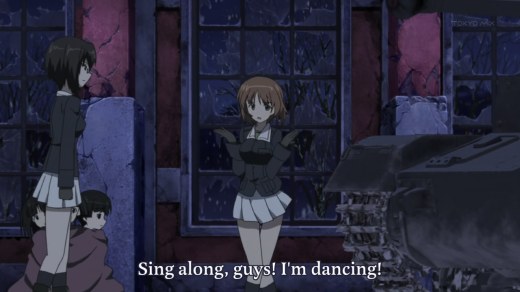 Out comes the Ankou dance! (and embarrassing Hana’s family). And on the big screen too!

The dance is interrupted by the Pravda messenger, who receives their answer, and now Nonna rouses IkaFangyusha out of bed to finish her job. So far, her strategy is to let them go after a weak point, and seemingly let them once again be encircled. Rather standard fare, and the flag tank is being guarded by the KV-2 downhill…which will derp-gun any foolish Ooarai tank. 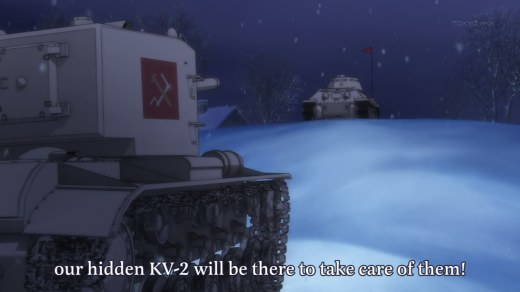 Battle start, and it seemed like my predictions from before about them going after the most heavily defended part of the line wasn’t too far off. Katyusha’s inability to see Ooarai as an actual opponent will get the better of her, as I’ve seen, though not noted, and it seems like my words are close to vindication here.

And as of note, particularly from my episode 8 observations:

I imagine that they might go for a breakout and scatter with the Panzer IV on flag defense, StuG III  with the B1 bis and M3 Lee as diversion. Pz 38(t) as the other flank for the Type 89. The B1 bis still has it’s howitzer intact, so they can blast out. Careful observation of enemy movements to find the weak spots, and break out either there, or even more ballsy, towards their Flag or the JS-2 and KV-2. An inviting target as we’ve seen with Pravda is just a new encirclement. Miho’ll earn her place as Field Marshall Rommel’s protege’ if she does this. If not, a descendant of Paulus.

Anzu trades Momo for the gunner’s seat, and she seems to be more proficient in gunnery than momo, earning the tiny little Pz 38(t) some of its pride by knocking out one of  Katyusha’s T-34-85 (specifically one of her decoys, unless she moved her command to another T-34-85). Acting as the decoy, they are doing what ever scout does that isn’t particularly fast. It’s face hugging time! With Turtle team taking the role of such a decoy, it surprisingly takes out two tanks and also destroys the tracks of several others before it is taken out by Nonna’s T-34-85. 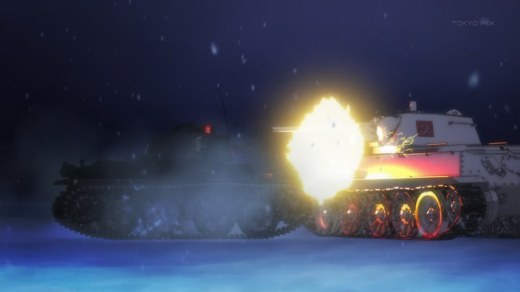 Katyusha, in her hastes, orders machine guns to be fired, allowing Ooarai to use the glow from tracers to see where they’re going. Her plan utterly ruined, Katyusha gives chase, while Ooarai keeps their formation together and soon, Hippo and Anglerfish, after the entire team and enemy team have crested the high ground and passed them go back to the village in the search for the flag tank. Nonna points this out, but Katyusha in her rage, gives no shits. Meanwhile, Yukari (in very elegant fashion) leaves the Panzer IV to be the observer from the town’s belfry, and Nonna switches tanks to the JS-2.

Now that Ooarai’s trap is sprung, Rabbit takes a hit from the JS-2 with Nonna showing why she is named ‘Nonna the Blizzard’, effectively taking out Rabbit team, while the KV-2 attempts to derp the Panzer IV and StuG III to no avail. The flag T-34 though, seems to be set on a path to go around the village, one that Miho seems to have seen, and orders Hippo team to halt their pursuit. With Goose team gone and Duck (flag) running for their lives, the tension is getting to very untolerable levels, much more exciting than the leisurely pace set with St. Gloriana and Saunders.

With the finaly minutes in, we don’t know who won. But the JS-2 takes out Duck (Flag), and the StuG III takes out the T-34-76 (Flag). GODDAMN CLIFFHANGERS!!! 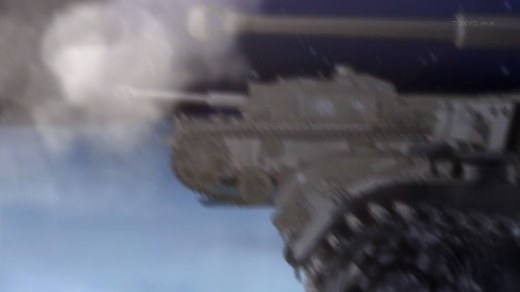 Conservative, Patriotic and an Otaku. Recent grad of George Mason University. I am interested in firearms, politics, Japanese Anime, and military tech.
View all posts by Jusuchin (Military Otaku) →
This entry was posted in Anime, Girls Und Panzer, Video Impressions. Bookmark the permalink.

13 Responses to Girls und Panzer: Driven into a Corner!