I…I didn’t expect that coming. Not this quickly. 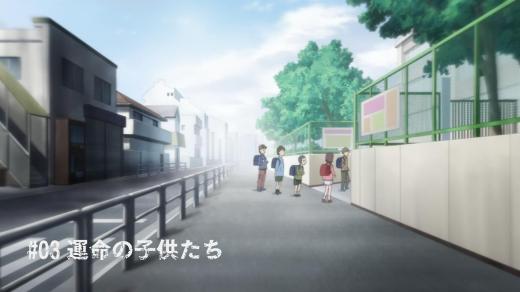 The episode starts off with Rentarou talking with the doctor about the discrimination against cursed children, as well as him getting a phone call about Enju going back to school. Amidst the hateful jeers and scared eyes of her former friends, Rentarou tries to break it to her lightly that her hopes of fitting in are dashed in this school. She asks if they have to fight, and Rentarou answers yes, just as a medevac chopper lands at the playground.

Kisara briefs them that she had found the source, and below the chopper, a giant spider-type Gastrea is floating along the air utilizing its webs much like a human would use a wingsuit. Without warning, Enju jumps out of the chopper, engaging the Gastrea. 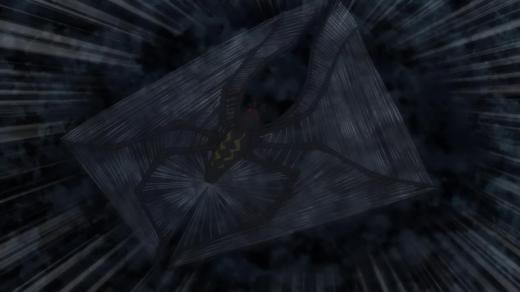 Rentarou follows by rapelling off the moving chopper, only in time to see her destroy the Gastrea. Claiming the box, all isn’t well as Kagetane appears. Throwing Rentarou around, Kohina keeps Enju busy as he defeats Rentarou easily. Telling her to run after Kagetane uses the same technique he used to dispatch the two SAT (Special Assault Team) officers in episode one, Kohina stabs him clean through, before Kagetane shoots Rentarou several times (?) into a river.

Rentarou dreams of a surgery, before waking in a hospital bed. Kisara informs him he’s been asleep for a day and a half, and that his heart started beating again during the surgery. Revealing that Enju was clinging to him under the covers, he receives a phone call from Seitenshi.

Even though he’s barely recovered from his last encounter with Kagetane, she asks him to join in the large-scale operation to stop him. He intends to summon a Level 5 Gastrea, one that exists past the evolutionary stages of the Gastrea lifeform, they are immune to the monolith’s magnetic fields and have already destroyed several safe areas. They need to stop him before Tokyo is destroyed.

The surviving Civil Service pairs are airlifted to the outskirts of Gastrea territory, and dropped in. Rentarou and Enju avoid numerous large-scale Gastrea, before coming across Kayo Senju, Shogen Ikuma’s Model Dolphin Initiator (the meathead’s Initiator). She had been infected with Gastrea but could continue on, and recounted that she had fired a grenade earlier due to encountering a level four Gastrea and had gotten separated with Shogen. 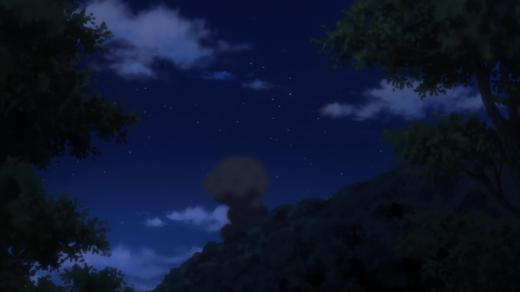 As a Model Dolphin initiator, she has more brains than brawn as we saw in Kohina and Enju, so the roles are reversed with Shogen being the vanguard and her being the support. It is at this point that we see how she is treated by her Promoter. She is envious that Enju has someone who cared and never had killed before. She says she killed another Civil Security pair because Shogen, in his greed, doesn’t want anyone else getting the reward money. 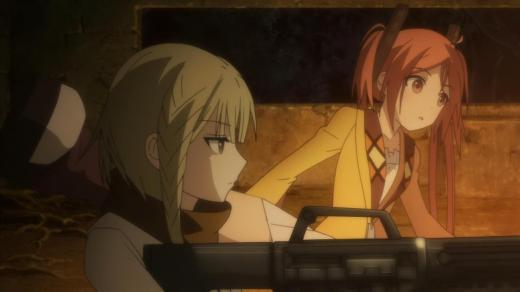 Satomi tells her that it isn’t okay to get used to the act of killing, while Kayo has seen that he has done so before. Telling him to not apologize for what he says, even though she can come up with reasons to go against his advice, he was right.

Shogen is alive still, and has found Kagetane. Even though she abhors his behavior, as her partner, she still feels an obligation to go. So the trio sets off deeper into the jungle that was once a city. Passing by a weapon called The Stairway to Heaven, Kayo remarks that the Stolen Generation’s hate is very strong. She doesn’t know if this current generation is an actual wholesome attempt at a revival. They look out over the bay as Satomi remarks that the area before them is where Kagetane is. 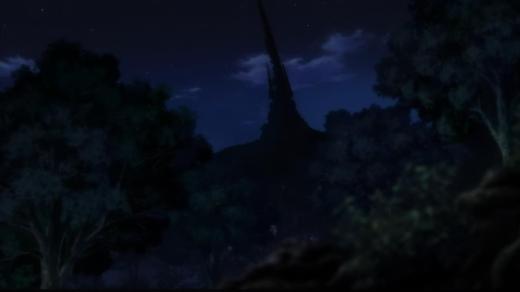 Well, that was certainly a rather one-sided curbstomp by Kagetane. It would seem, unfair, maybe? An ‘enhanced’ human who works for the elimination of humanity for some goal or cause. It’s a trope prevalent in fiction no doubt, but Kagetane’s execution of his goals is refreshing to me. Something again, like Heath Ledger’s Joker. He may not have the class of Nolan’s Ras al Guul, or Bane, but he has that flair for theatrics.

I find him the more interesting character in comparison to Rentarou. Rentarou really shows off his humanity when he deals with Enju and the discrimination of the Cursed Children. It’s something I can respect him for. But the one-sided beating, it’s amazing he managed to pull through from that. He was clinically dead, if I understand it correctly, between being shot into the river to being recovered and put through the surgery.

Apart from that, I really like him, because he still has a heart. Something I imagine is hard especially when his parents had died. Many others, like Shogen, treat Cursed Children as nothing but tools, and not the humans they are. If a person has cancer, or AIDs, or similar other diseases, are they treated as different? Sub-human? I doubt it. But I think the problem there is that these kids aren’t like those people. They have superhuman powers and can fight a Gastrea on a one on one basis. Not many people can do that.

But it still can’t get past the whole ‘let’s treat em like they’re sub-humans’ bit. Treating them more like property or tools are bad. And hell, any competent gunny or swordie knows to treat your weapons well or they’ll never perform as well, what’s wrong with showering some love on the girl? Granted, this theme was touched on by Gunslinger Girl with the Rico-Jean fratello’s relationship versus Henrietta-Jose fratello’s, but it’s kinda tragic to me. We already had a glimpse of the neglect when in episode 2, we had Kayo mouth ‘I am hungry’ to Rentarou. That’s beyond an aloof, indifferent kind of partnership, and bordering on child abuse! 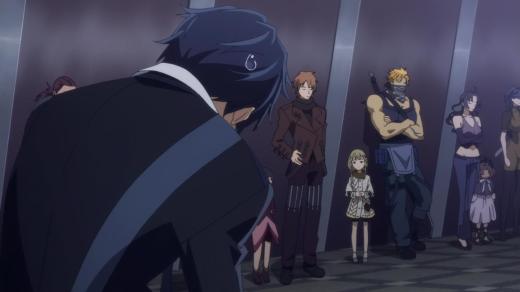 It’s sad I think, and probably going to be bad. If humanity will not treat these girls right, what stops em from turning on these people? They can’t very well ignore them forever, since they’re needed to fight the Gastrea themselves, but I think this neglect of the Cursed Children’s basic human rights is, well idiotic. But then again, it is a reactionary, knee-jerk, emotionally driven prejudice, much like the one done by Americans after September 11, 2001. I can only forward to this hopeful, eventual change.

Anyways, we’ll see. Episode 4 is the long awaited rematch between Rentarou and Kagetane, and the fight between Enju and Kohina. I hope it’s good, considering it’s been hyped up in the OP.