Quick Thought: Log Horizon S2 Episode 10 and What It Means to Me

So, Log Horizon 2 episode 10 is yet another episode why the show really connects with me. It isn’t Sword Art Online, a romance harem show with some window dressing about gaming. To me, both universes are complex and have the capability to be some deeper intellectual and social commentary on the ways of the world.

But SAO ended up being a story of Kirito and Azuna and the growing harem, while Log Horizon to me wasn’t just a story of Shiroe, Akatsuki, and whatever girl will join in. First season covered a variety of challenges and commentary on social trends. I loved how Shiroe and the Round Table handled bringing together people in trying to form an effective working government. Handling its first foreign policy crisis. Dealing with its first true rival.

Log Horizon also dealt with how people would react to such situations. Akihabara, through trial and error, became a quasi-democratic, or at least ‘free’ city. Susukino became an openly tyrannical place, while Minami became a somewhat utopian dictatorship/oligarchy. The problem of bland, tasteless food made from the game’s dropdown menu, even to the combat system itself, as well as communication, was seamlessly integrated from ‘game’ to ‘reality’.  I’m sure there are better commentators on this, maybe even so far as to be a panel at a convention?

And so brings my little rant about Episode 10. Episode 10 is a 20 or so minute long rant by a defeated guild master upon encountering a seemingly impossible task. In it, he goes down to the reason why we play games. The outside world would like to see us as nothing more than useless people. People who think they mean well, or even know they are being harsh, and ridicule people like me. People like me who aren’t as social as some. Who are more content with staying at home and talking to people from the other side of the world rather than waste time at some club.

Eventually that kind of treatment, by friends, relatives, strangers, just make us want to give up on society. We’ll function in it, but would never prefer to be a part of it, if the social graces of the day require some ‘looking down’ on more ‘hardcore’ gamers. Looking down on me, my friends online, because we aren’t being ‘normal’. We aren’t wasting our money on super expensive clothes or drinks at a bar. That we obsess over a bunch of pixels and data rather than a Victoria’s Secret model or some hot actor/actress.

Basically in a sense, those people wouldn’t understand gamers.

And half the time William goes over his speech, all I can think about is the recent GamerGate controversy. If there is any proof on why many gamers are believing their own way of life is being subverted by Social Justice Warriors, maybe the fact that I can relate with this fictional character in this work of fiction. A character who was written by an author who actually does play video games and know of a person’s feelings of triumph and defeat in games, as well as the way some people treat us in real life. 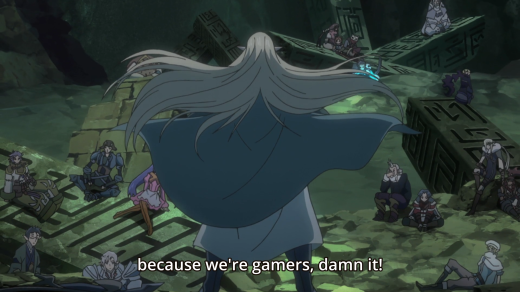