I’m quite sickly, I’m just gonna do a quick run down on the two acts this episode, my thoughts, and go back to trying to not cough up a lung.

Zorzal manages to complete his coup, placing ‘generals’ who share his misguided views of victory and placing the capital on lockdown. Through conversations between Grey and Piña, Zorzal also finds out where Lelei is and asks them to summon her to the capital. Piña is hamstrung politically and her only allies are Japan and her own Rose Order of Knights, Diablo falling in line to do Zorzal’s bidding to keep his place. Piña manages to not be purged as the Pro-Peace Senators are to complete the ‘peace talks’, but Zorzal and his men, many of whom were part of those exchanged in the deals, plan to use unsavory tactics to defeat Japan. All the whole Tyuule’s hands start to touch every aspect of Zorzal’s new regime to bring about her revenge. 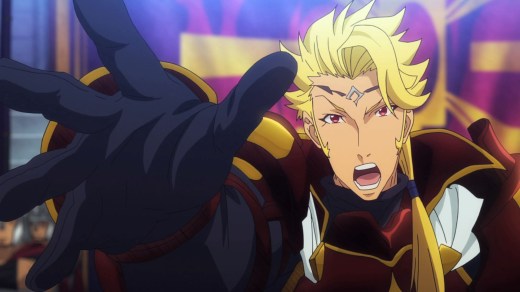 Back at Rondel, Mimoza and Rory reconnect, having been adventuring together 50 years prior when the Grand Mage was still young. Having traveled to the other side of the Gate, the group discusses what they saw on the other side, which somewhat freaks out Arpeggio on accounts of the cheap books (she copies books on the side). While Lelei and Arpeggio have a little sisterly love-hate thing going, Mimoza points out that Arpeggio’s specialty is in minerals, and may be of use for Itami. After a while though, Rory asks Mimoza on her homework, to which the older woman obliges. She explains the origins of the world, explaining that all the species in the world were all travelers of the Gate on Alnus, with Humans being the most recent additions to the world.

While Arpeggio states Lelei should’ve stayed in Rondel to learn from many diverse mages like Mimoza, Lelei says she wouldn’t had gotten her shot at Master as soon as she would’ve had, and then pulls out a laptop. It was through using the scientific knowledge of our modern, contemporary society alongside magic did she really progress far and deeper than most, leading Arpeggio to again wail at her paltry achievements. Thinking that she’s better off as a housewife, she asks how Itami is like. Lelei explains that he’s a Japanese officer with various other titles, and Yao explains he’s basically loaded, with Rory saying he’s single, much to Mimoza’s and Arpeggio’s celebration. Lelei corrects them though, saying they have done the three nights ceremony, where a man and a woman sharing the same room for three nights is considered a couple. Then others go mad, with Tuka being told her bout of insanity doesn’t count, and Rory looking rather cross. 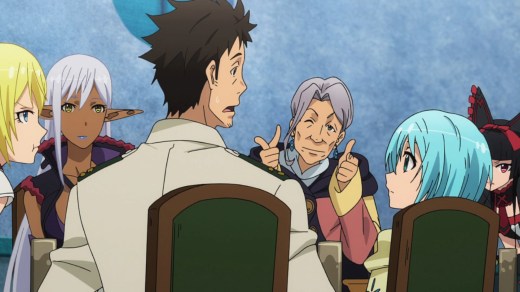 This though is not as bad as what Arpeggio does. Upstaged by her genius-level younger sister and now MARRIED little sister, the older mage slams a soup bowl on her younger sister’s head. Rory officiates and sponsors the upcoming duel, with both sisters showing a surprising level of skill. Both have strong offensive and defensive magic, and Rory merely tells Itami to let them have their duel to blow off their steam.

In the end, after a surprising amount of property damage and skill is seen, both end up losing their defensive magic in a tie, only for Lelei to meet the business end of a crossbow. She is spared the assassin’s crossbow bolt when Grey arrives, running him through with his sword. Having been ordered to bring Lelei to the Capital by Piña, they found out en-route that a hit was placed on her. While they may have a clue on who ordered it, they aren’t willing to give it up since it’s still a hunch. They talk on how Lelei has been the celebrity of the moment for her role in defeating the Fire Dragon (much to Apreggio’s dismay). Even if she wasn’t an Imperial citizen, that just made her even more famous. 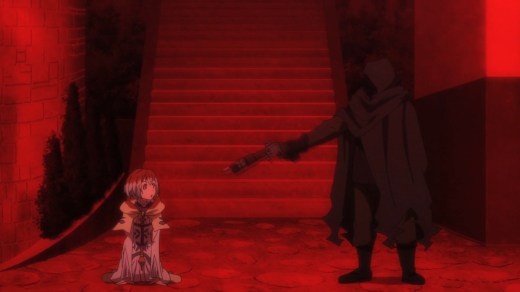 Back at the capital, the person of interest is enjoying a hamburger, when the true manipulator is handing out edicts that means they could arrest anyone regardless of innocence under the new regime, all according to her plan.

Switching back to Rondel, Grey explains that a notorious assassin, the Pied Piper, has taken the hit and is no match for him and Shandy. Itami states that he’ll protect Lelei no matter what, but Grey misconstrues his intentions. He isn’t going to face the assassin, their first order is to run away.

I said it on Facebook, and I’ll say it here. Arpeggio isn’t a bad mage. I think she’s quite good to be honest. Her diverse learning track is definitely doing her some wonders in learning different paths to her specialist magic in minerals and manipulation of such elements. She’s just upstaged by a natural genius, who coincidentally was at those ‘right place, right time’ moments. First learning from a famed mage like Kato, then falling as the main contact point of the initial Alnus refugee town with the JSDF, then falling into an understanding of modern science and using that to enhance her own magic.

She isn’t bad, she just has a massive inferiority complex when put up against her younger sister, Lelei. What I did find interesting though, was Mimoza’s homework. It seems the Gate opens up to different worlds, each new race coming in and settling the world every so often. With humans being the newest additions. Does this mean that eventually the Gate will close? If it does, maybe the efforts of Itami and other resource groups might be a Godsend to the garrison when the Gate between the worlds shuts down.

Will they manage to escape, or will they become part of the world’s group of people much like others before them?

That said, the wheels of war start turning now with Molt’s illness and Zorzal’s coup. With Diablo falling into line and Piña hamstrung, it’s only a matter of time before the war that Zorzal things is his own doing, comes about and Tyuule gets her revenge. These two actors, the manipulated and the manipulator, seems hellbent in returning the horrors of facing a technologically superior (and their main advantage, their speed versus horse and wyvern) foe. Especially since the Imperial Army is full of new recruits and ‘generals’ who are more blown in ego than they are in experience. Those generals died in the fields of Alnus. It might be telling if Diablo’s mission to bring into line more troops from other kingdoms fail. Those kingdoms had seen what the Alnus garrison can do. So it’s only a matter of time till we reach the end game. With five or so episode left, it’s anyone’s guess how the anime will end.

Speaking of the anime, I did state that the anime had skipped a manga arc. After finally catching up with the manga, I can see why they skipped it. It’s one thing to have Romero-type zombies, or The Walking Dead-type zombies, but zombies that look as if they’ve not decayed at all? The level of gore in that arc was similar to that at the Italica siege. Add the fact that Rory is overpowered and -eaten- by a Minotaur, and Itami kissing Lelei (in order to force down antibiotics into her mouth) and that would most definitely shoot up the rating of the anime.

Still, it would’ve been interesting. I always thought Rory was much better defined in the manga, both visually (she isn’t that skinny and much better proportioned in the manga) and that she’s still much more relatable as a character.

Anyways, I look forward to the next episode, it seems more centered on the besieged Japanese ambassadors than it is Itami and his group.

Conservative, Patriotic and an Otaku. Recent grad of George Mason University. I am interested in firearms, politics, Japanese Anime, and military tech.
View all posts by Jusuchin (Military Otaku) →
This entry was posted in Anime, Gate: The JSDF Fought Like This in That Place, Quick Thought. Bookmark the permalink.