High School Fleet (Haifuri) Episode 11: In a Pinch with a Battleship’s Big Cannon!

We’ve now reached the penultimate episode (according to the wiki, Haifuri ends at 12 episodes), and it’s a bit more tense now that we’ve finally gotten to the actual conflict with Musashi. It was a fun ride, and I wonder if the ride will be gentle in letting us off, or kick us off from a moving train and onto the platform.

As the girls starts to put away the decorations, Shirou hears Mike out, who explains that she’s finally starting see the ship as her family. What scares her, and what she can’t explain, is the fact she fears losing them.

Back in Japan, it seems that the Musashi’s original course towards the Philippines was in error, and she had actually surfaced on the Blue Mermaids radar literally off the coast. The Blue Mermaids only have a small force to stop it, the majority of their ships anticipating to engage the Musashi off the Eastern Philippines. 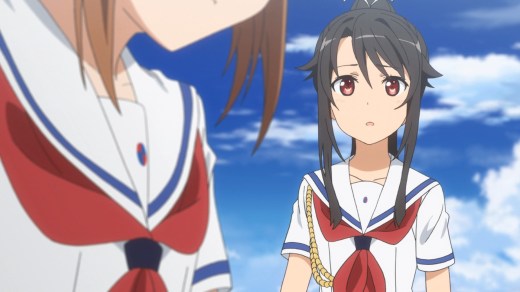 Back aboard the Harekaze, Coco explains the situation and the girls are all gung-ho in chasing after the Musashi and rescuing it like they did with the Admiral Spee. This is in part to the new weaponry they receive (5”/54 Mk. 16), a new FCS (an upgraded USN Mk.37 Director) as well as new torpedo directors on the bridge (which sends Mei to a tizzy). All the while though Mike seems ill at ease and reminds them that they are to follow the school’s instructions, and note the differences between the Harekaze and Musashi.

Back at Yokosuka, the Blue Mermaids report into Principal Munetani that they are making best speed to catch up. Her subordinate though notes that the Musashi will breach their absolute defense line and be in the midst of Tokyo within three hours. Inquiring on the status of the Harekaze, the destroyer will catch up to the Musashi in two hours.

Cutting to the Harekaze, they make contact with the Musashi which opens fire on them. Evading fire, Mike has them get some distance between them and while the crew offers suggestions to fight back, Mike breaks down. The detached task force of four Blue Mermaids Independence-class LCS appears just in time and attacks the Musashi, taking the heat off of the Harekaze.

The Blue Mermaid fleet enact their attack, with raiding teams ready to board. While their initial attack is successful, with the M110 57mm Gun destroying one of her secondary armaments, things goes awry as the electronic interference forces a guidance lost on the ARSOCs launched from the Blue Mermaid ships, forcing the Blue Mermaids to rely on traditionally launched torpedoes.

Back aboard the Harekaze, Mike spills her heart to Shirou, unbeknownst to them that this is being broadcasted throughout the ship, while on the Musashi, the uninfected members of the crew are counting down the amount of munitions they have. One of them is unable to take the fact their ship is firing on the Blue Mermaids, though Moeka calms her down.

It seems back when the whole mess started a month earlier, Moeka and a few of her classmates managed to barricade themselves into the Bridge of the Musashi, staving off the infected students but unable to do anything about their predicament, thus explaining the panicky distress call from earlier in the series.

Back in the present day, the Blue Mermaids vessels (which seems to have been fitted out in combatant modules for this task?) launch their torpedo run. Unfortunately the last ship in the line is hit by the Musashi and knocked out of combat. The fleet goes around the Musashi while launching the drones which attempt to blind the Musashi’s bridge. The guns are confused, and the Blue Mermaids damage another secondary armament, but the drones are destroyed by the Musashi’s Anti-Aircraft emplacements and the Musashi strikes back, disabling another two ships and leaving only the command ship of the task force intact. 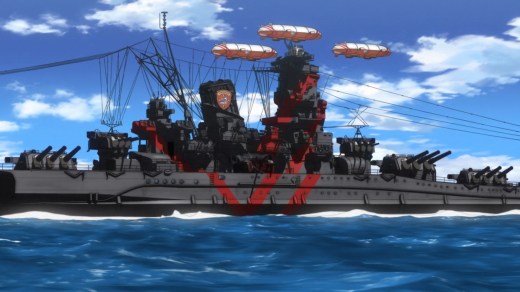 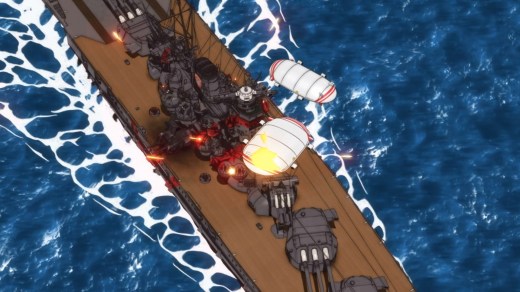 Back on the Harekaze, Coco leaves the bridge while the others are dismayed, wishing Mike and Shirou to be back on top to tell them what to do. Back at Mike’s quarters though, Mike finally explains why she’s seizing up. She’s scared that in order to help the Blue Mermaids and save the Musashi, she might lose the Harekaze.

Back at Yokosuka, informed of the situation, Principal Munetani orders the school ships to retreat, and to contact the Disaster Management Committee (who has set an evacuation of Tokyo already). Principal Munetani has declared that the Yokosuka Girl’s Maritime High School to be in a state of emergency, and excuses herself as she goes to take her command. A member of the committee is confused at this, but was informed that when an earlier incident of a fleet rampaging happened, Principal Munetani was the captain of the lone vessel to annihilated them. 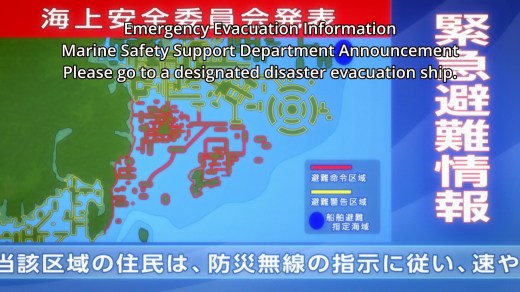 Shirou tries to talk to her but stutters, leading Maron to come in. Mike explains though she can’t make a decision, that they’ve just been lucky the whole time and is unable to stand losing her family. Maron has enough of this and orders C/Engineering Personnel Wakasa Reo to bring Mike to the bridge and brings Shirou to the engineering room.

Offering her a drink, Maron goes off into some grandiose speech about tuna sashimi and mayonnaise while Hiromi translates. Basically she’s saying that while they differ, they are united by a shared goal and it becomes a good combination in a way. And that true comrades’ make up for each other’s deficiencies, that Shirou is the only one to snap Mike out of her stupor.

Rushing back to the bridge, Shirou snaps Mike back to the real world with Maron’s example, though Hiromi isn’t too pleased that was how she managed to have the message stick. Explaining to a confused crew, she says she wants Mike to continue on like she has been doing, to make decisions and to bring them luck, while she and the rest of the crew will help bring those decisions to fruition. 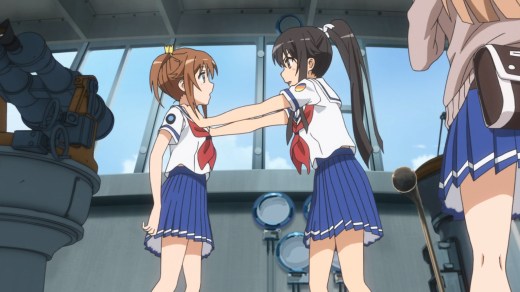 Moved by Shirou and the crew, Noma calls out that there is a light signal from the Musashi’s bridge, Moeka warning off the Harekaze. This is proof enough that she is alright ad all the reason to save them. Taking up her hat again, Mike is filled with purpose and orders the Harekaze to close with the Musashi, sending a response light signal indicating they intend to rescue her ship.

And now we’re at the second to last episode, and it helps put away the psychological loose ends. Mike has been carrying a burden on her since Moeka’s initial distress call, and then building up to when they first realized that Moeka was still safe, and finally after Hiromi’s little character arc was completed in the previous episode. All of it comes to full circle with Mike in this one.

It’s to be expected, the subtle growth of the cast in the span of a month (in-universe) to a crew that initially thought nothing of their captain as lucky to someone who is capable, then helping her move out of her stupor when she was at her lowest. It’ll surely help tie up the series in a nice little neat bow for next week’s finale. There really isn’t much to say about the Harekaze’s crew at some point without me merely rehashing what I’ve been saying in the past few posts.

What intrigues me though is Principal Munetani’s reputation. While it’s been hinted at before, it is only now that something concrete about her past is revealed. Considering her name and accomplishments, it is no doubt why she was placed in charge of Yokosuka’s feeder school for the Blue Mermaids. If she as a ship captain take on a whole fleet of rampaging ruffians with just her own command, the Musashi might be easy pickings for her.

In defense of the Blue Mermaid use of the Independence-class LCS, the modularity of design and creature comforts afforded to the class seems fitting to what the Blue Mermaids require. There is no doubt in my mind that Blumers Independence-class LCSes are fitted with search and rescue modules and full medical facilities, and possibly a notch up in weaponry for interdiction roles. Their ‘cheap’ construction also means a lot more can be launched and used to cover a larger area, though at a cost. Possibly why we’ve only really seen them in groups, a bit of ‘strength in numbers’ so to speak.

The Harekaze though obtained some upgrades. Her firepower was upgraded to the USN’s 5”/54 Mk 16 turrets, which were intended replacements to the original 5”/38 Mark 12 found on the Dual Purpose role throughout the USN. Originally envisioned to be mounted on the unbuilt Montana-class battleships, they were later placed on the Midway-class Aircraft Carrier and on early Japanese Maritime Self-Defense Force vessels. With a range of 25,909 meters at 45 degrees, they are an upgrade to the earlier 10cm/65 Type 98 and initial armament 12.5cm/50 3rd Year Type armament.

Add with the new torpedo director and the addition of a late-model USN Mark 37 Gun Director acting as their new Artillery station, the Harekaze has become the ultimate kitbash. Wondering how she’s able to mount those weapons, panzerfan and Sumeragi among others noted that the mounts could be same, and could be done considering the successful up armament of the Yukikaze when she was rechristened as the Tan Yang in the Republic of China Navy.

This though brings up another interesting question regarding how the crew of the Akashi was able to pull off such heavy remodeling in such a short time period. I once again put my foot in my mouth and explained it as, and I’m paraphrasing Jeremy Clarkson here, ‘much the same as that museum ship; It’s old and it’s beautiful, but it has modern RADAR, all the pertinences of modern naval combat’. 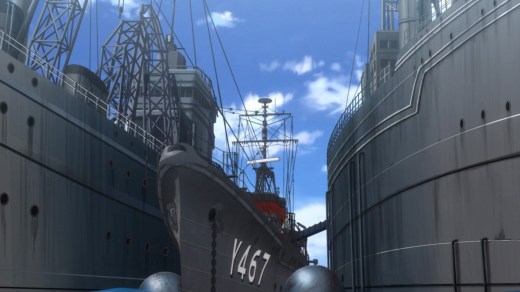 This is where my bull-headed explanation of a modular, semi-automated training ship comes about. The modern crew size of an Independence-class LCS is roughly 40 officers and crew. This is achieved by the greater automation found in such vessels. Rather than build ‘training’ hulls, they merely repurposed older ones, completely building away in the inside of the ship to match operational realities and current doctrine to help acclimate incoming Blue Mermaids candidates with their specific roles and duties aboard the more modern ships.

I’m sure the budget spent in converting ships like the Hiei, Admiral Spee, or Musashi could’ve been better spent on actual training hulls, but why bother when such vessels can be called upon as an auxiliary force anyways?

But I wander off to a completely random tangent. This is why I’m intrigued with High School Fleet. The world building teases and amuses and never is concrete, but is solid on some key points. It’s a storyteller’s malleable clay in my eyes. And is reigniting a dull ember in my muse to go back and find some forum play-by-post roleplays again.

Then life gets busy or I decide to do Haifuri on World of Warships…except with the Atlanta raining HE spam.

In all, it was an exposition episode with minimal combat, and the final swift kick in the butt for Mike to finally trust herself and her crew in rescuing her childhood friend and saving Japan. Hopefully we can see Principal Munetani come out and kick ass, or the Admiral Spee to join in, but while a Munetani x Harekaze team up seems reasonable, unsure about the Admiral Spee making it in time.

That does begs the question. Is Principal Munetani going to appear on an Independence, or another ship?

Conservative, Patriotic and an Otaku. Recent grad of George Mason University. I am interested in firearms, politics, Japanese Anime, and military tech.
View all posts by Jusuchin (Military Otaku) →
This entry was posted in Anime, HIgh School Fleet (Hai-Furi). Bookmark the permalink.