Kino no Tabi -the Beautiful World- the Animated Series (Episode 12)

And thus ends what I deem a rather good reboot/re-imaginging of a series that I’ve viewed over the years through rose-tinted glasses. I hope everyone had some fun with it, though I know for some it wasn’t their cup of tea in comparison to what other offerings we had this season.

Kino and Hermes are travelling through a field when they encounter some sheep. The sheep takes offense to the pair and gives chase, and soon two flocks of sheep are chasing after Kino. Going full tilt off road, Hermes warns Kino of the impending crevasse and they are able to stop in time. With the seemingly murderous ovines gaining, Hermes urges Kino to go down. Unable to take Hermes with her, and the gap too wide for them to jump it, Kino can only look at the bottom of the ravine in annoyance. 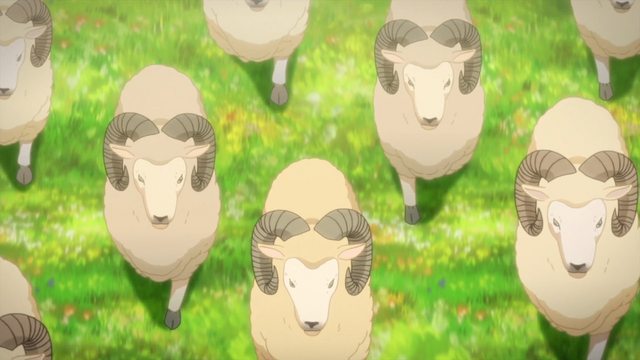 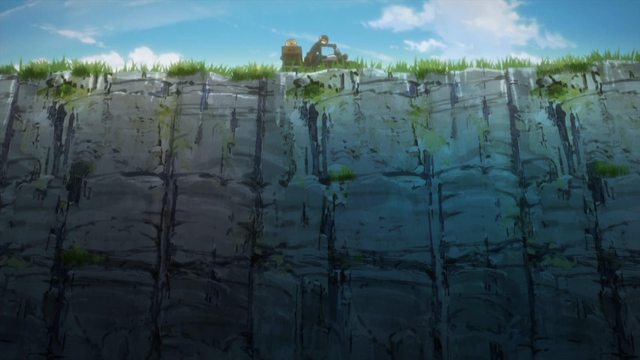 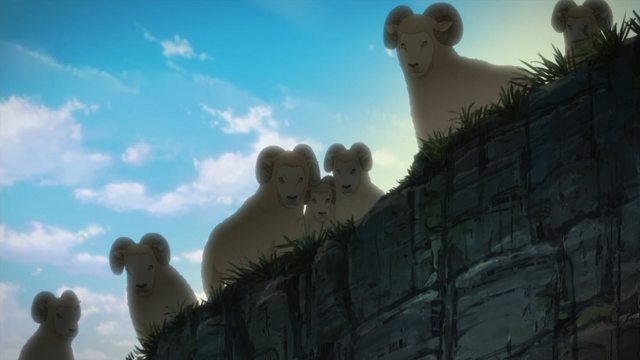 The flock of rams, ewe, and lambs follow Kino as she walked upstream in the ravine, the sides very unstable and crumbly to allow her to climb up the other side. The persistent flock follow her until the next day. Scouting the area, and assured that the sheep had retreated, she spots what seems to be red Land Rover Defender 90. The previous owner had not seen the crevasse and drove into it, beset upon by the bloodthirsty sheep, the traveler committed suicide due to an inability to move further due to a broken leg. 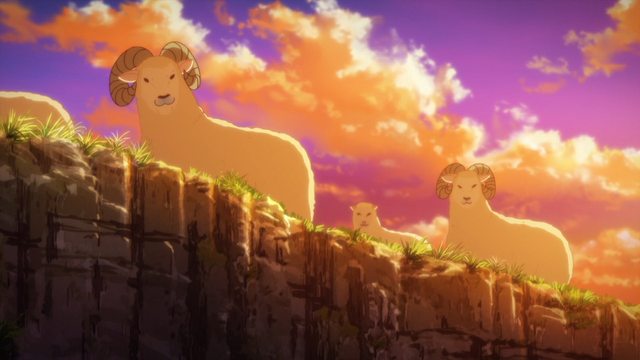 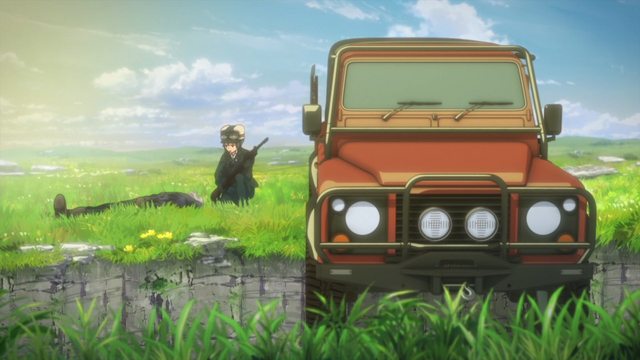 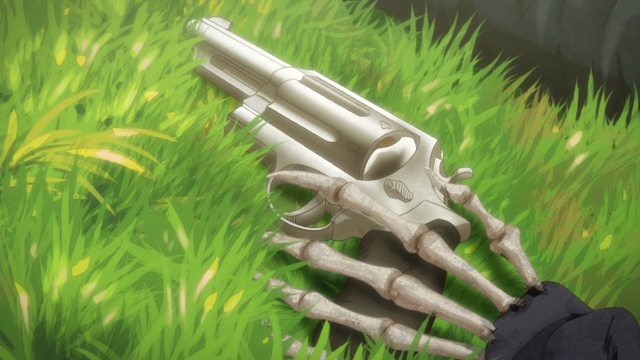 Kino was able to use the sand ladders/Marsten mats inside to get the vehicle out, and she also gave the deceased a proper burial. With a full gallon of petrol, she comes back to Hermes, fighting off the sheep and no doubt killing many by ramming into them. She created a ring of fire from the petrol and an incendiary round from her Flute, and utilized her Canon, Woodsman, and Flute in killing many of the sheep. 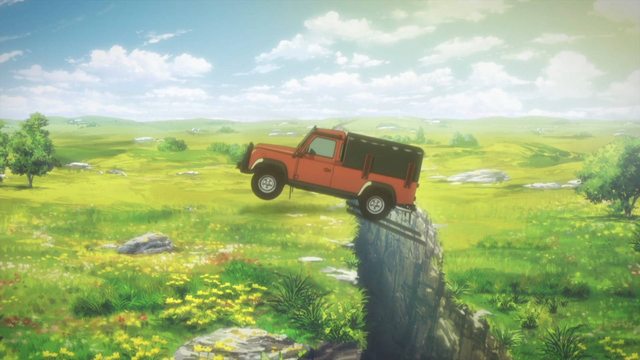 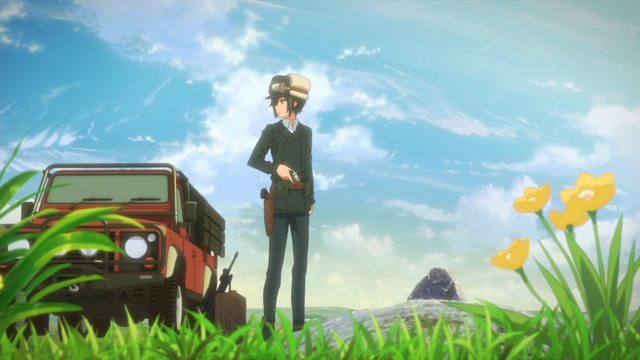 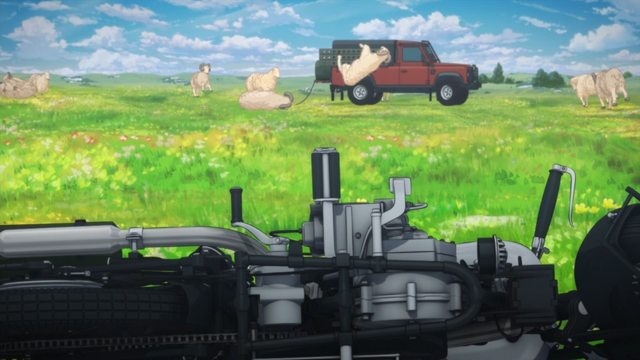 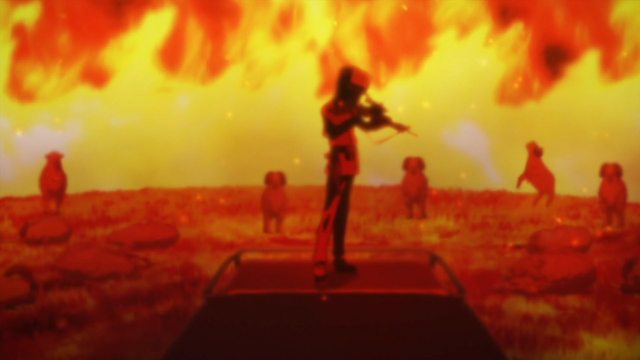 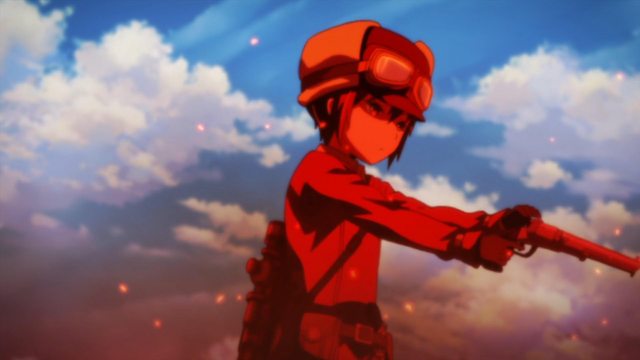 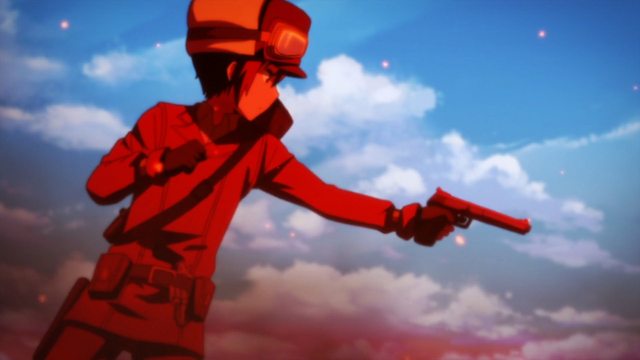 With many of the animals dead, she fashioned a ramp for Hermes, who had been joking to lighten the mood, protested vigorously. A single ram makes it through the ring of fire and blocks their way. Hermes jokes that such an animal would give health benefits if consumed Kino killed the last obstinate ram with the deceased traveler’s revolver persuader. Chased by the remainder of the herd, Kino jumps the gorge with the last of the demonic ovines falling to their doom. 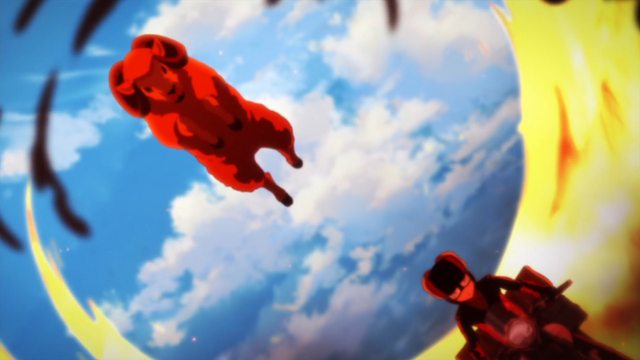 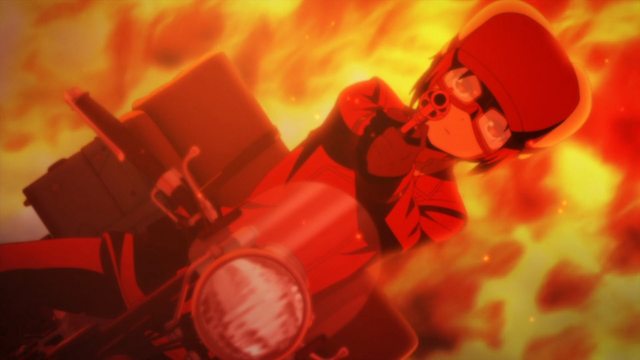 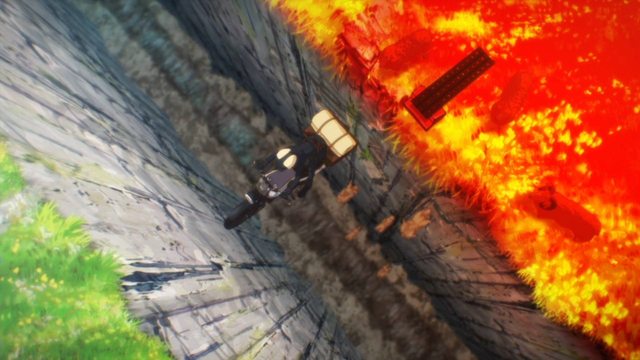 She manages to land in a way that doesn’t damage Hermes, and the pair continue on after Kino observes the carnage on the other side, questioning why they flocks of sheep had fought so hard. 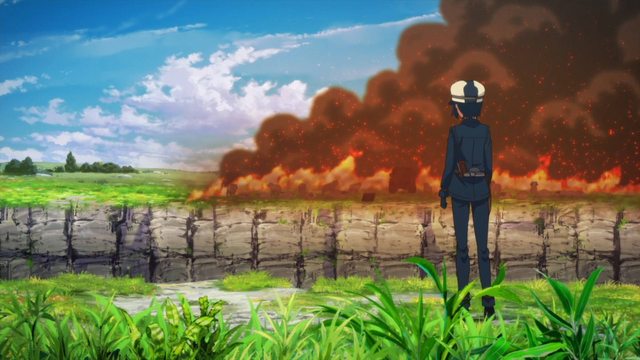 Making their way to the next country and wanting a bed, the immigration officer is ecstatic that they are receiving visitors. The drought of travelers entering was unknown to them, but on an afterthought, the man asks Kino about the sheep. Responding that there were sheep in the fields, the man is happy that they are still going strong. It seemed like the sheep were bred as fighting sheep and were selectively bred to be competitive and fearless. 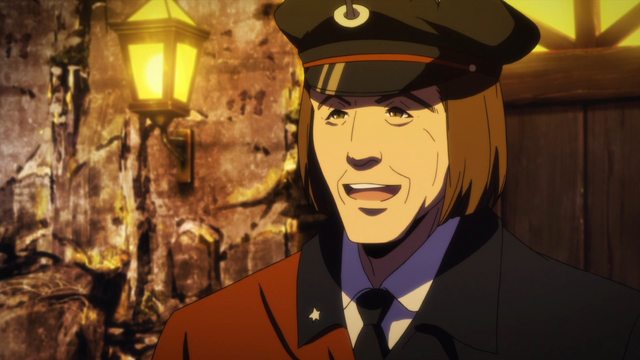 Unfortunately, an animal rights movement forced them to free the sheep outside the city walls, and thus explains the murderous animals that most likely led many travelers to their deaths. With this in mind, the immigration officer wants to inform the citizens of the status of the sheep while Kino is quiet on their current status. 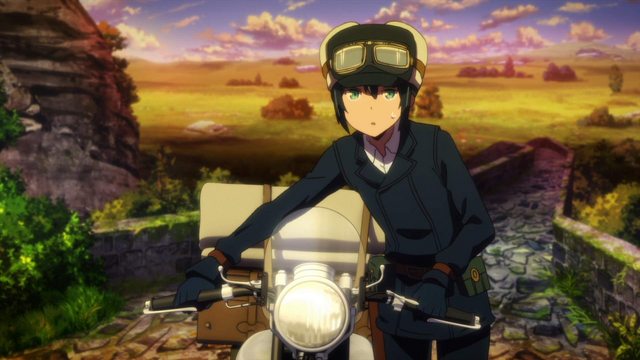 After the credits, Kino is seen discussing her plans with Hermes, noting that her journey has ended the small knoll with two trees, creating a perfect spot for her hammock. A little bit of a shoutout to the audience and Kino explains that her journey thus far has ended, but once she wakes from her nap, and journey would resume; and that if it were a radio serial, it would be the perfect end point for the first series before continuing on with a second series later on. 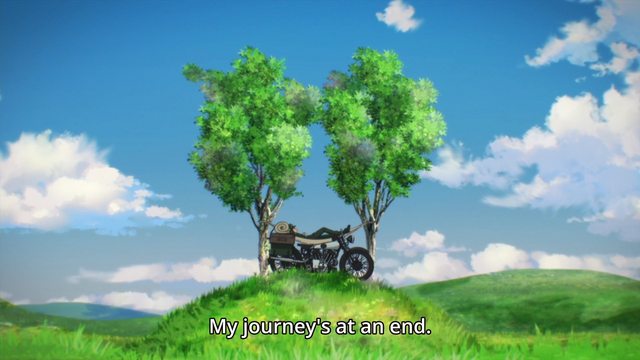 Kino no Tabi to me is a series that I’ve viewed with the rosy lenses of teenage nostalgia. I admit my true awakening to anime was during the moe glut of 2000-2007, noted by some people to be the dual savior and destroyer of the industry. 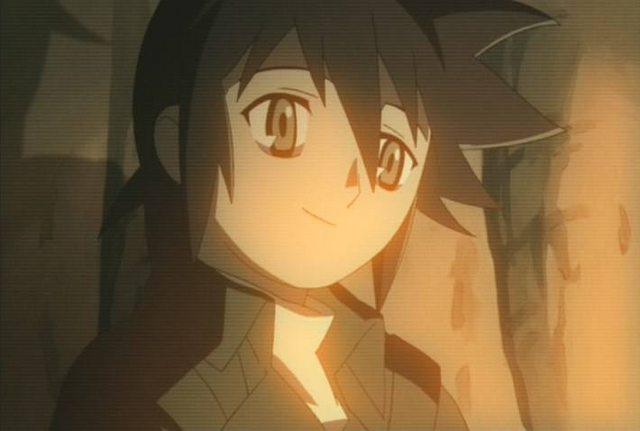 Kino no Tabi is one of what I consider in the top 25 of series, and in fact, the tagline is the secondary title of this here blog. A reminder that without the ugliness of the world, one cannot find the beauty. I had taken a bit to warm up to the series, and it wasn’t until the fifth episode that I had finally fallen in love with it. Unlike the earlier series, Kino and Hermes were not the sole protagonists of the series. A greater emphasis was placed on Shizu, Riku, and Ti; Shishou and her companion were given their own story and much mentions; and even introduced the girl Photo and her motocompo Shou. 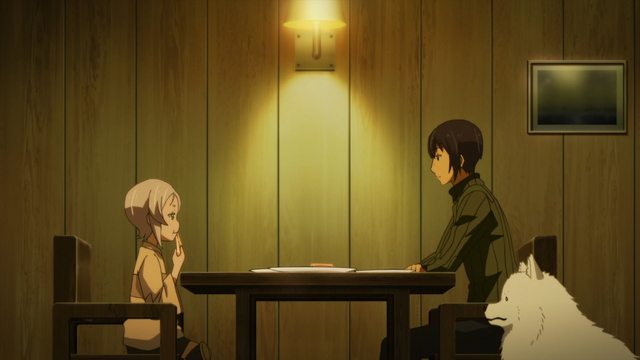 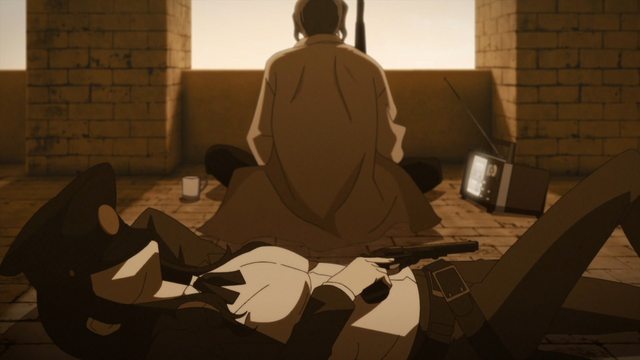 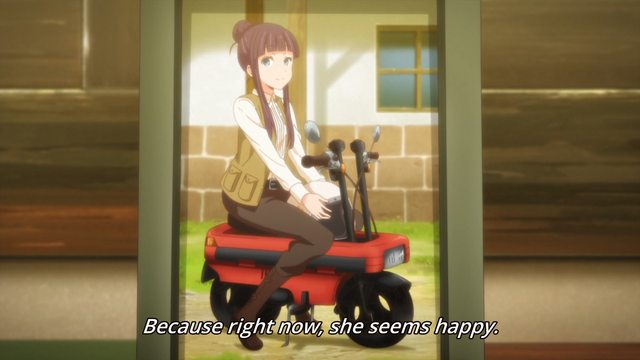 I believed these new perspective in the wonderful fantastic world that they all travel in enhanced the show. I did take some issue with the animation direction, most specifically in Kino (male) being younger, though in my explanation last week, I thought it eventually made sense. I was floored when Shishou was given more of limelight this time around, but still managed to keep a mysterious air about her as all we are given are Kino’s memories and stories of her younger self. 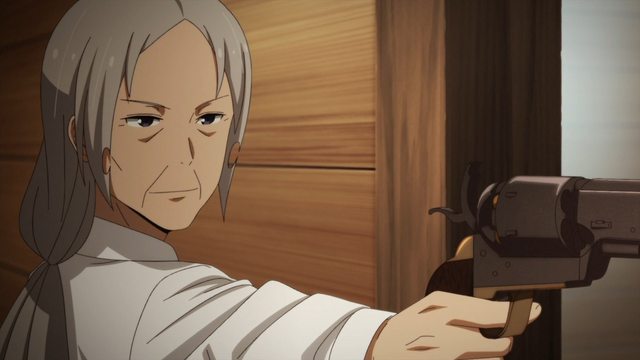 Of course, it cannot be a Kino no Tabi series without mentioning the three most popular stories. Coliseum, Nice Country, and Land of Adults. I consider these episodes to be the core pillars of the show. I was disappointed with Coliseum mainly due to the fact much of the story was condensed in comparison to the 2003 series, where it received a two-part adaptation from the original story. As for Nice Country and Land of Adults, the same emotional rollercoaster was there, and I think enhanced by the somewhat better animation and greater emphasis on the lives of the people in the former and the turn to religious dogma on the latter. 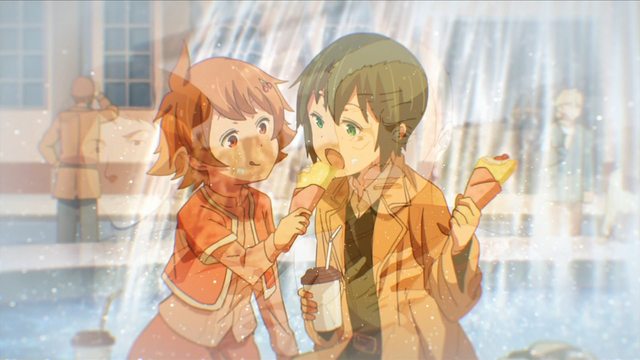 I’ve drooled over this series since hearing of its return, and I had come to embrace the expanded cast of characters as time went on. I am disappointed that we did not get much Photo time, but if there really a season 2 as I and others wish, I echo Patrick Fyre’s hope that we do not have to wait another fourteen years for it. 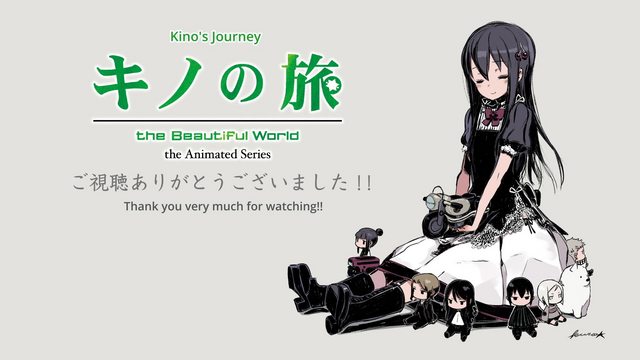 Conservative, Patriotic and an Otaku. Recent grad of George Mason University. I am interested in firearms, politics, Japanese Anime, and military tech.
View all posts by Jusuchin (Military Otaku) →
This entry was posted in Anime, Kino no Tabi, Kino no Tabi -the Beautiful World- the Animated Series. Bookmark the permalink.