So, I thought I’d be able to get a post out after Katsucon for Asuka episode 6 before Friday. But since leaving the con I’ve been bedridden, well, scratch that. I went to work on Tuesday and by Tuesday night I can’t put much pressure on my foot. I’ve called out on Wednesday and been resting since.

And I’m going to be fair, Asuka episode 6 really didn’t get juicy until the end.

So my quick thoughts on the past two week’s episodes.

I actually found this episode a bit boring. I think for many of these ‘beach’ or ‘festival’ episodes, I tend to gloss over them because I tend to find really nothing in them. I think the best fanservice episode from any series would be the hotsprings episode from Outlaw Star. Not only was it full of gratuitous shots of Aisha Clan-Clan relaxing in progressively hotter and hotter pools, a good deal of Gene Starwind’s Caster weaponry is discussed and rare caster shells acquired.

I did think that the interactions with the two magical girls and their mundane friends were needed especially after the emotionally draining past few episodes. Nozomi is as chipper as ever, though I think she has been roughly treated with Kurumi’s yandere personality. I still can’t like Kurumi, I’m not particularly fond of her character. 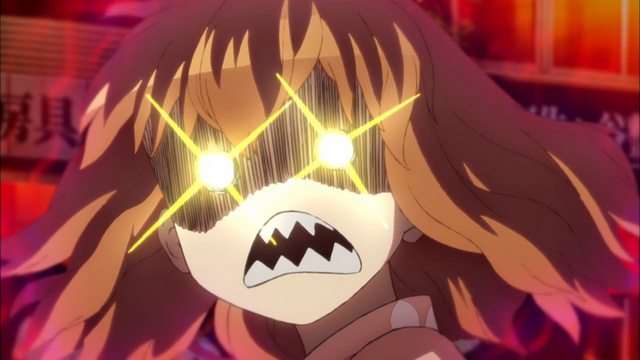 While she isn’t axe crazy like Abby is, I think she’s much scarier than Abby is. A master of magical concoctions, she isn’t like Abby in that she wants to cut you up to have fun, she wants to experiment, test, and use you as a guinea pig. Honestly she scares me, and I’m sure somewhere someone is making parallels to Unit 731 with her ‘enhancements’. 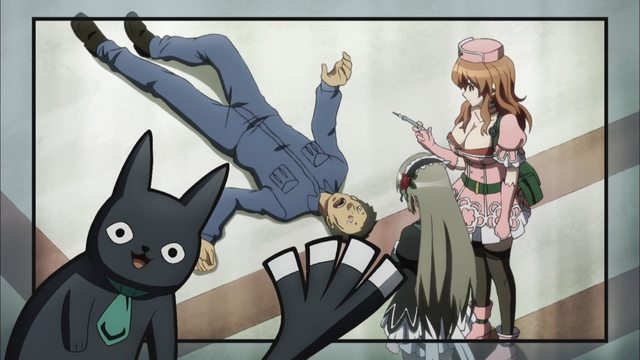 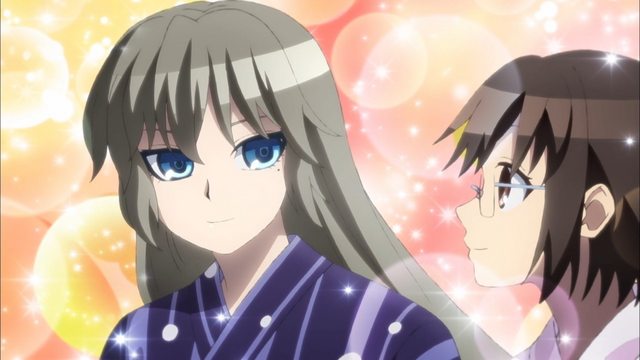 As for the more action filled path, I would like to say there was this nuance about the gray-gray morality of war and eye for an eye being a thing. But I’m biased in my thought process with Just Cause Mia and Crescent Moon Sandino. The circumstances for Sandino wanting revenge against the United States and Just Cause Mia in particular is a story that’s basically been done in Hollywood and Anime for a while now. Only this time you add magical girls in the mix. 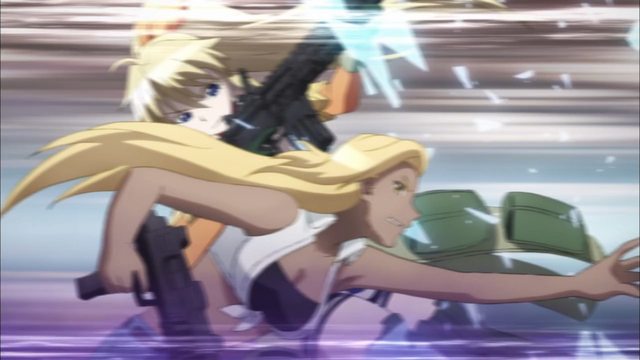 I would probably go on to care, but, I don’t. For the simple matter that there was a war going on. Her family and kid were collateral damage when the world is fighting off interdimensional magical monsters. It sucks, it truly does, but she then resorts to become a magical mercenary at the beck and call of the Tijuana Cartel and Babel Brigade? And also deploying a disas beast? I think she’s lost her way, if she had any. 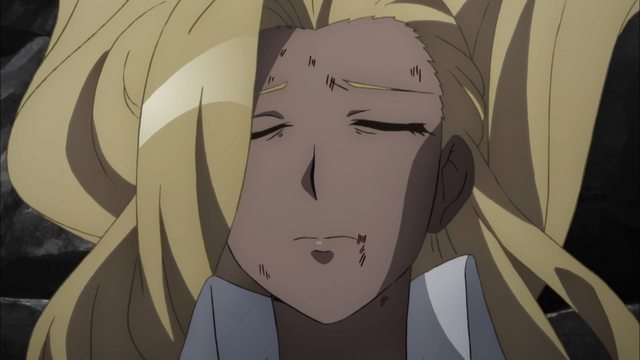 Her deathbed repentance is off for me. She said she’s relieved she didn’t have to kill a child (Just Cause Mia) but she’s done enough killing already. Mia herself has already soaked her own gloves in blood, and sacrificed her childhood, her parents, and friends to defeat the enemy. Only for terrorists like Sandino to go around and wreaking havoc in the world she and the other magical girls had fought to save.

I totally get Just Cause Mia’s expression when she executed the dying terrorist. 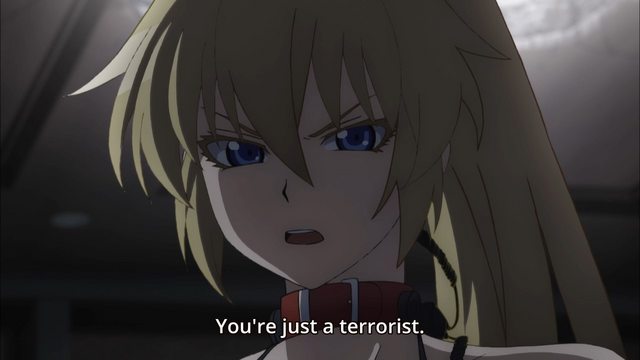 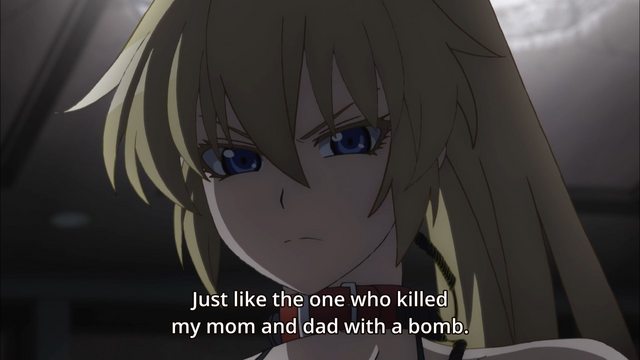 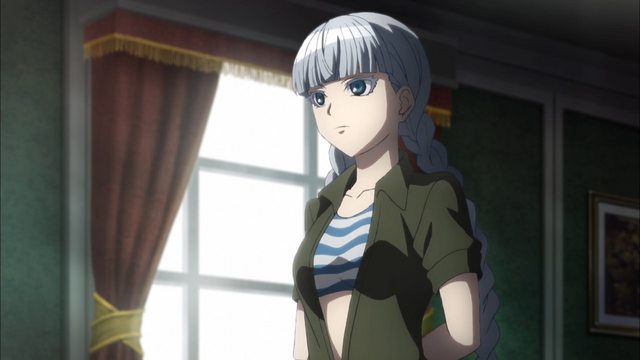 Well, I doubt that the Russian Federation truly believes that. So far the Russian Federation, or at least its citizens and veterans of the magical war have been involved in shady underworld and illegal magical criminal activity. The two wizards who Asuka defeated in Tokyo were Russian, and in this episode, it is a Russian mafia syndicate that is peddling in abducted Japanese citizens for supposedly magical items. 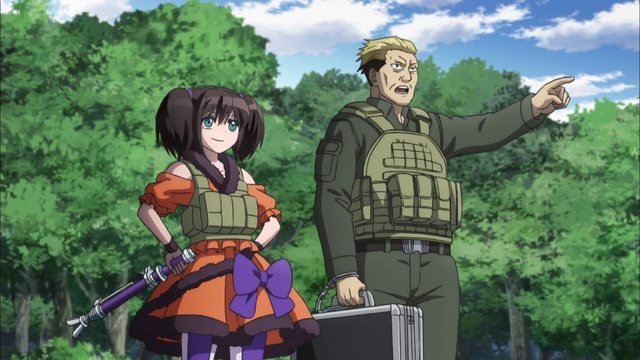 To be quite honest, when discussing Russia and with an asset like this in their hands, I cannot help but imagine Tamara being deployed to a place like say, Chechnya. Or South Ossetia. Or the Crimea. Places where a little bit of magical mayhem might help. Or cleaning up internal strife like a little bit of drug cleaning or Mafioso offing. 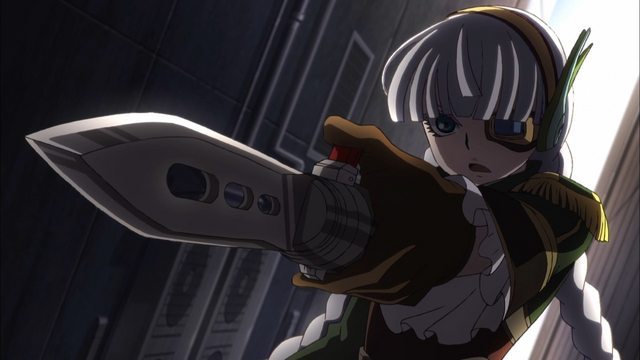 In this episode, we’re shown a scene in which Asuka, after losing half of her team after taking command, gets a BSOD moment. It is Tamara that would snap her out of it, pleading with her to endure the suffering for just another hour more to ensure their victory. We can see why Tamara sees her as her ‘sister’, someone that Tamara no doubts respects and cares for. 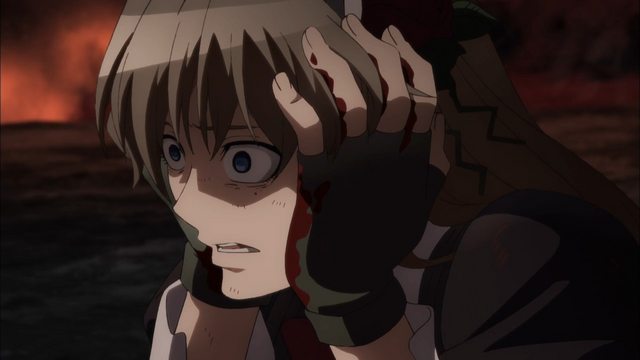 Asuka in the modern day is formally inducted into M Squad, celebrating with expired MREs. Before anyone could go ahead and be truly joyous, Iizuka comes with a mission. Asuka is then deployed to her first mission in Hokkaido, where a Russian Mob is trading Japanese citizens for magical items with other-dimensional beings via a temporary portal between worlds. 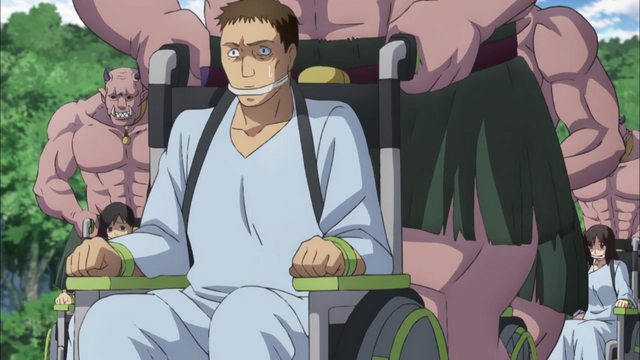 In the mission, the magical mercenary uses her device to shoot fireballs into the nearby forest, knocking out one of the M Squad members and momentarily freezing Asuka as it reminds her of the people she lost in the fight. Kurumi’s pleading for Asuka’s protection thought snaps her out of it and she takes down the mercenary effortlessly. 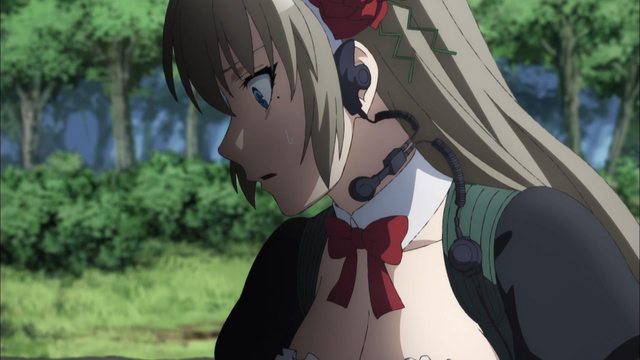 I imagine that this would be something that bites Asuka in battle, she’s saddled with too much trauma that if someone knows her triggers they can cause her to hesitate and get her hurt or killed, or have someone else hurt and killed.

Which leads me to why I haven’t talked about Babel Brigade in the Episode 6 thoughts. When Tamara intercepts the Mafia leader in the alleyway, when he is finally defeated he mentions that she may not like what she finds in the case that had been chained to his arm. Ditto in the penthouse where Mia found the Magical Girl Squadron’s motto scribbled on the mirror. 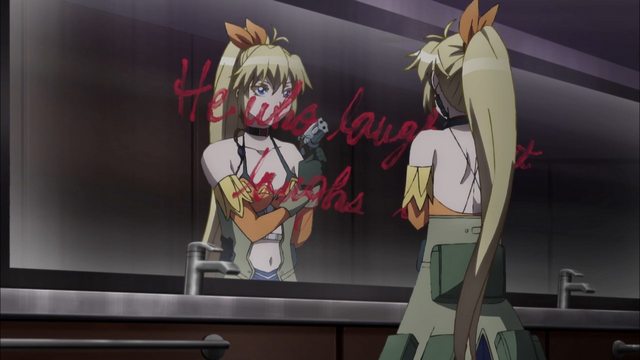 Throughout the series, it seemed that this ‘Queen’, who we never got a good shot of her face, knows the surviving members of the Magical Girl Squadron. She is toying with them to have the survivors all show up in the same spot. So far four of the five are now operating in some capacity in Japan, either as members of the JGSDF’s M Squad, conducting their own investigations, or snipping undesirable knowledge. The fifth, the Chinese magical girl, might appear soon. If anything, I imagine it’d be played out as if one of the other five are behind the gruesome calling cards of the Babel Brigade and weaken them with infighting. 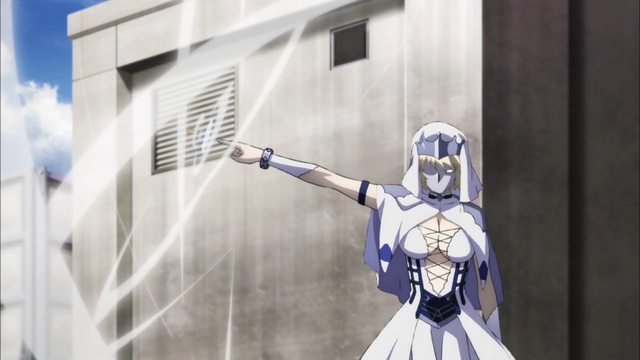 Overall, I’m somewhat wondering if the pace of the series would lend it to have a satisfactory conclusion. It is now halfway through the season, though I’m pretty sure things will pick up now with the constant foreshadowing that Asuka may know who Queen is.