One housekeeping note, I did not do anything blogging related during my week off from work. It was a week of airsofting (and getting drenched), some heartaches with a computer build refresh, and smashing The Division 2’s endgame like a cheap piece of meat. 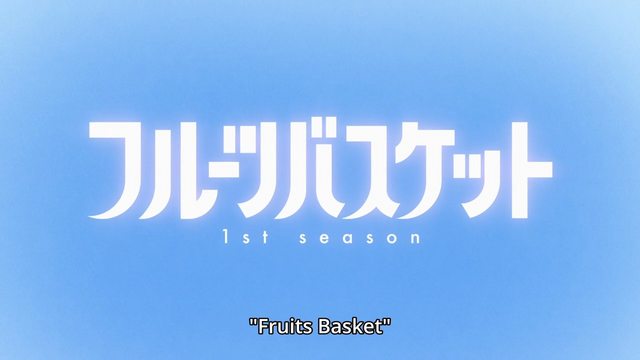 Once again, the nostalgia senses were kicking in when I started watching. The character design is familiar and homely, there really wasn’t something I can nitpick on unlike say, LoGH: Die Neue These with the bishification of many iconic characters. Tohru still looks like Tohru, Kyo looks like Kyo, etc etc.

Speaking of which, the story revolves around Honda Tohru, a high school girl who has been thrown into a bit of homelessness due to the death of her mother and her grandfather’s inability to allow her to stay. Stumbling into a nearby home of Soma Shigure and Soma Yuki, she ends up moving in with them after a landslide destroys her campsite. She also meets Soma Kyo at this time. 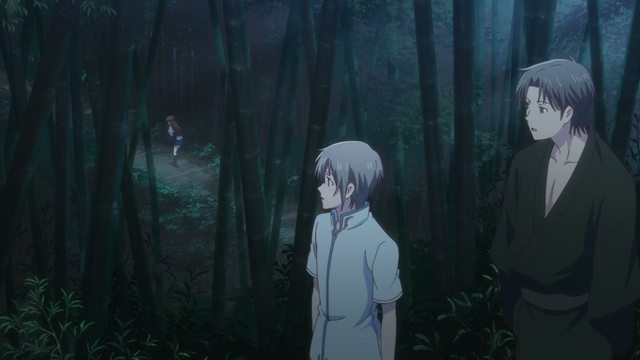 The three hold a secret, in that they transform into animals from the Chinese Zodiac when hugged by a member of the opposite sex. Yuki being the Rat, Shigure being the Dog, and Kyo being the cat. This revelation happened when Kyo broke into the spare room they had given to Tohru to stay at, having arrived to challenge Yuki to a fight. Tohru slips on some wood planks and inadvertently comes into contact with the three. 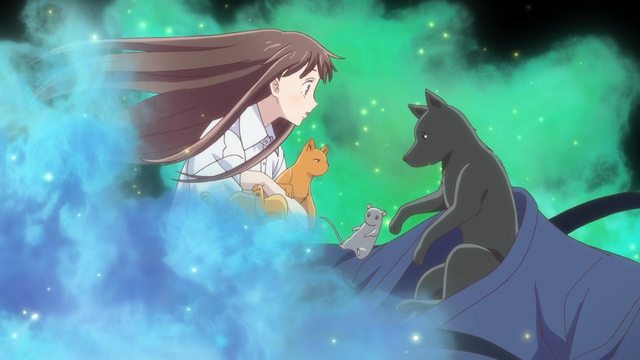 Before one asks, the Cat isn’t in the Chinese zodiac, but is found in the Vietnamese one. The legend that Fruits Basket uses is that the Rat tricked the Cat by deliberately giving the Cat the wrong time of the great banquet with the Jade Emperor. Another legend is that both the Cat and Rat had tricked the Ox into ferrying them across a river, but before reaching the other side of the bank, the Rat kicked the Cat to drown in the river and jumped off the Ox’s back to be the first at the banquet. 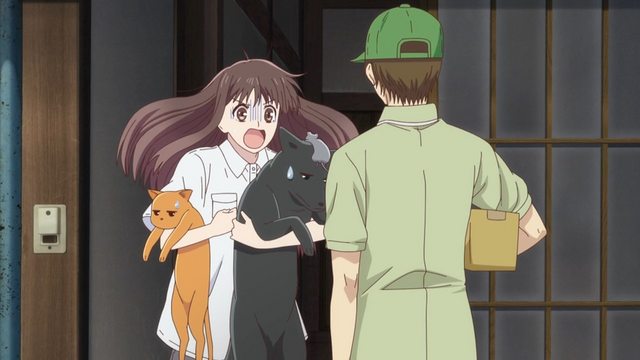 Tohru takes the transformation rather well, being brushed off by the delivery person as probably insane. Having revealed earlier that Tohru had sworn as a child to want to be born under the year of the Cat after hearing the wrongdoing the Cat had suffered, it seems she may have met him in real life in the form of the rather brash and quick to anger Kyo. 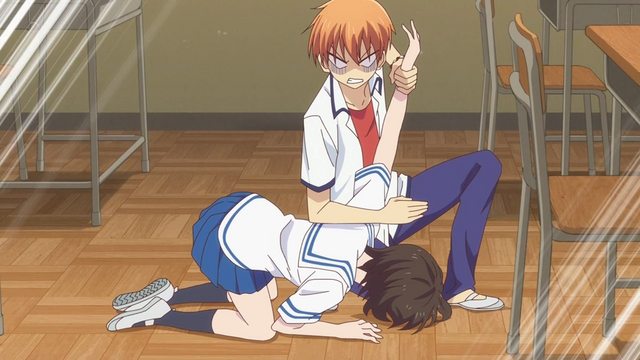 Now, over the course of three episodes, the background lore is established. Those who know of the Soma family secret outside of the family have their memories erased, but for some reason Tohru is granted a reprieve from this. Other establishing lore is that Kyo had been delinquent from his all-boy’s school and was tricked into transferring to the co-ed school Yuki and Tohru are attending. A group of girls calling themselves Prince Yuki’s Fanclub actively discourages other girls from approaching Yuki, and they set their sights on Tohru after walking to school with him. 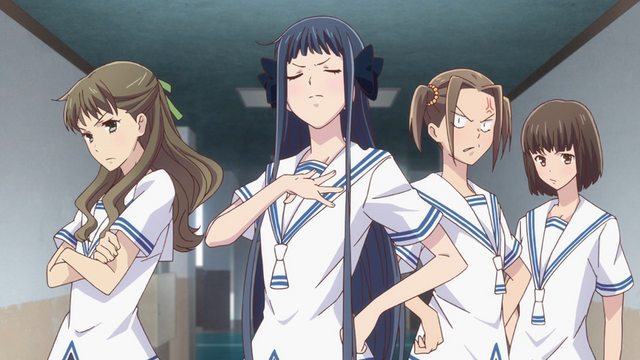 Tohru has two friends, Uotani Arisa and Hanajima Saki, a yanki and a psychic respectively, who had vowed to watch over her after Tohru’s mother, Honda Kyoko, died. They deal with the fan club I their own way. Arisa with her lead pipe and delinquent reputation, and Saki with her psychic waves. It is hinted that Saki might get close to knowing the secrets of the Soma family just on her psychic powers alone. 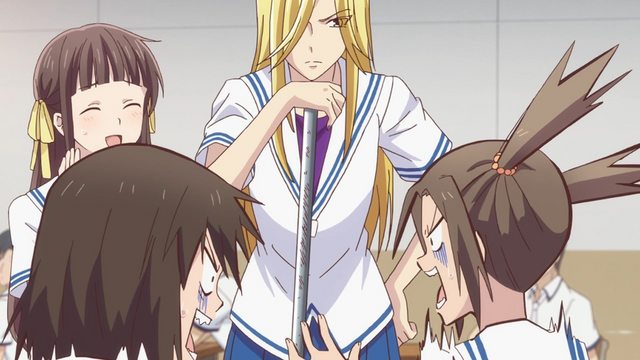 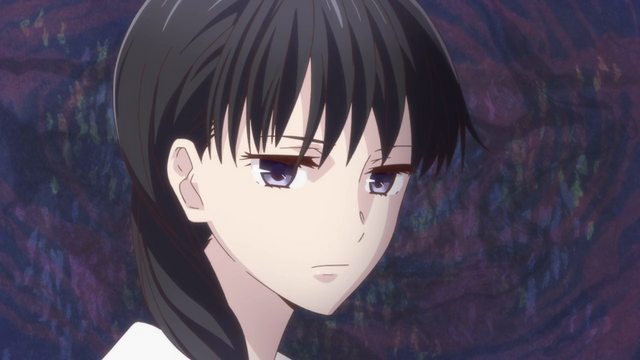 We also see why Tohru is always cheerful and striving to finish school. It was from wanting to do what her mother, a middle school dropout, was never able to do, and it was because her mother wanted her to keep smiling. Tohru seems easily excited and clumsy, which leads to hilarity. Kyo is brash, arrogant, and kind at heart, which allows him to make friends rather easily. Yuki though having been born into the Soma circle finds it hard to make friends knowing the consequences of secret being known. 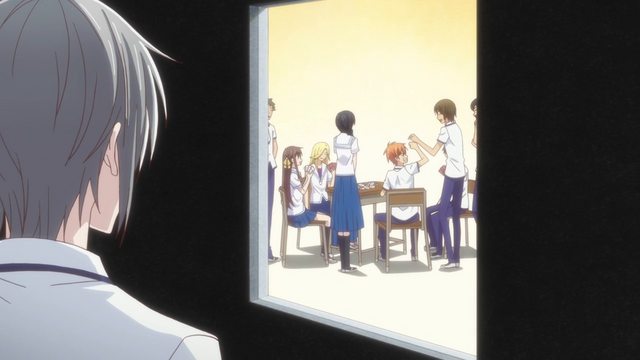 Both boys have stated to Tohru their own goals, for Kyo to be accepted into the main circle, while Yuki wants to break free. Their constant fighting (in which Yuki always wins) was due to the head of the household informing Kyo that if he defeats Yuki, he’ll be allowed in. In a sense, they’re both unable to understand the motivations of the other, having been born with opposing circumstances. 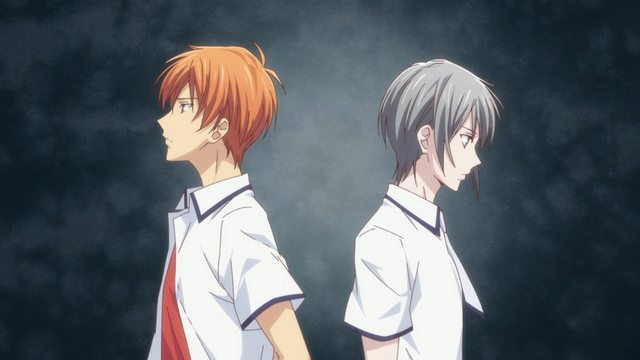 The series seems to be setting a good pace, allowing time to build the foundation of what we know of the Somas, Tohru and her friends, and the ‘curse’. The new anime intends to adapt the entire manga so there is no fear of rushing the show to fit 13 episodes or what have you, though how much or how little is being left out is not going to be noticeable for me until I have a chance to reread it. I’m pretty sure my local library system has the manga. 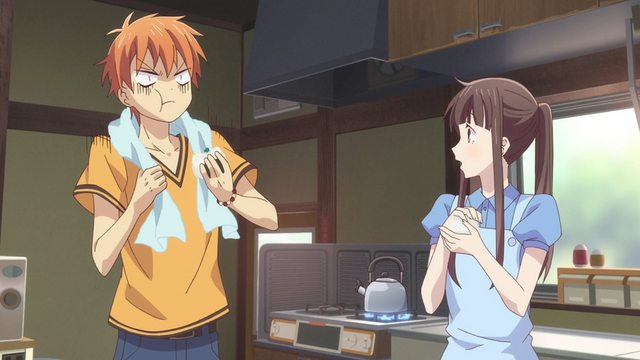 After the lukewarm PTSD thriller that was Magical Girl Spec-Ops Asuka last season, I’m in the mood for something light and loving. I mean, I could go and watch Amagami SS again but I kind of reserve that for winter re-runs. I’m wondering how many seasons this will run for, or how many episodes per season, I can’t seem to find where that’s listed.

I will admit, this hits the nostalgia button for me. I’ve seen the original anime and have read the ending for the manga way back in my high school days. Roughly 15 or so years ago. Seeing that I’ve borrowed those from an old classmate, I don’t have quite an accurate recollection of things. 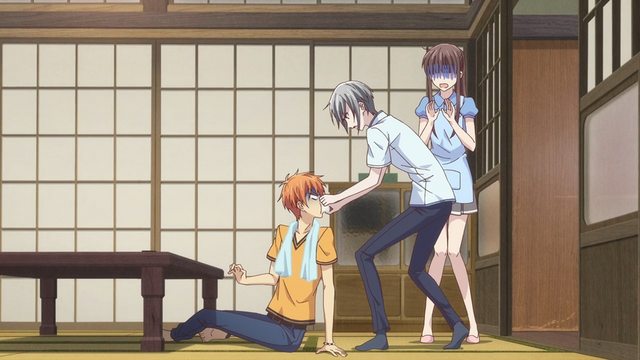 I am planning a few more TERs, as I originally listed, though I’m dropping Strike Witches in terms of blogging. They’re nice quick episodes I can watch on my lunch break but there really isn’t anything I can talk about.

Next series for a TER will likely be Fairy Gone.

Conservative, Patriotic and an Otaku. Recent grad of George Mason University. I am interested in firearms, politics, Japanese Anime, and military tech.
View all posts by Jusuchin (Military Otaku) →
This entry was posted in Anime, Fruits Basket 2019. Bookmark the permalink.