Let’s bring some sunlight into this place. – The Sunshine Blogger Award 2019

“Publicity is justly commended as a remedy for social and industrial diseases. Sunlight is said to be the best of disinfectants; electric light the most efficient policeman.”

This was spoken by Justice Louis Brandeis and it is often used in political commentary when discussing transparency, normally to bash the heads in of your political opponent. I feel that the quote in its entirety, short form, or paraphrased, is used too often and without any real meaning but as a gotcha for any position not your own. Or as proof of one’s own unassailable position.

I have no idea where I was going with that, but eh, it was the first thing that popped to my head when discussing sunshine.

Anyways, I was nominated for the Sunshine Award by Lynn Sheridan over at The Otaku Author, and I’m thankful to be considered for this award. I should really start writing more. Now there are some stipulations with being nominated for such an award by fellow bloggers, so here they are:

There are always rules and they shall be followed!

Reisen on a Computer, drawn by itsutsuki on pixiv.

Well, answer was really that I wanted somewhere I can write more. I originally had a LiveJournal and a MySpace back in the day (OOOOOOLLLLDDDDD) and it was where I would post statuses about my life and some random thoughts. I did some politics in the early days of my blog, nowadays that stays on Facebook and Twitter. The blog got its real anime start with Girls und Panzer, and as feedback from people who liked what I had to offer grew, I was more or less motivated by Miguel.GFZ from Gun Free Zone into continuing with this side venture of mine.

2) Is there a story behind the name of your blog?

I blame Kino no Tabi/Kino’s Journey. The blog was meant to be a mile marker on the daily ins and out of my life. This was really before Facebook truly took off to be the censorious cancer social media giant that it is today, and saw it more an extension of my now defunct LiveJournal account. I think the more direct link to Kino’s Journey would be the subtitle being the series tagline.

3) Do you think you’ll still be blogging in five years?

I honestly believe I will, if not in the same volume as some, and maybe with months between posts. Somewhere where I can just ‘write’. I’ve long held that audience/traffic to me isn’t a thing. I’ve not quit my day job nor is this part of my day job. I can really see myself still chugging along in my own pace in five years.

I thought about video commentary and podcasts before. I’ve done some videos where I discussed my gameplay in World of Tanks but that’s it. I can’t really be bothered and I honestly wouldn’t be in control of the plot if I did either of the two. If I do a podcast I’d have to be on someone else’s as a commentator.

5) What anime would best describe you?

Well, damn. This is bringing up some memories of just being that strange loner kid. I don’t think there is an anime that could best describe me. So I’ll give two. The more ‘silly’? Otaku no Video. Specifically, the Portraits of an Otaku bits. Yes, I went there. There really isn’t much to be said about it, we can live with the weirdness of our subculture or not. There is no escape.

As for an actual serious answer?

There is various slice of life shows, action where I want to be -the- action. But to me, the anime that best talks to me would be Kobayashi’s Maid Dragon. I do not have any dragons around me (unless we go with the Chinese zodiac then you can say my mother and I are both dragons). But Kobayashi’s work life reminds me of my own. Work, home, sleep. Work, home, sleep. Lounge about on my days off, have a drink or twenty when able.

So yeah, you can ignore the first part, I wanted to toss that in there, but the second one. It’s hitting me in the feels. 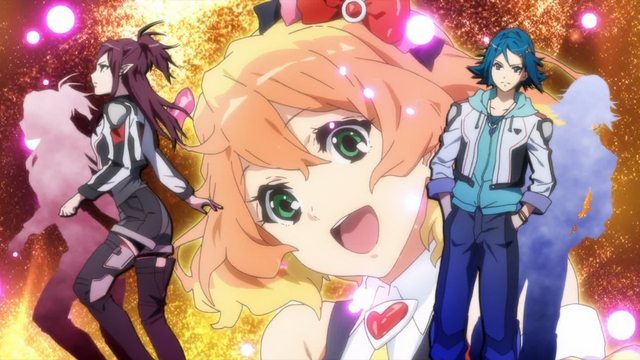 6) What was the last anime you dropped?

Anything that wasn’t Fruits Basket or The Rising of the Shield Hero from last season. This includes Fairy Gone (I get nauseus at the CG), the 501st Strike Witches shorts (blagh), Senko-san (slowly getting back into it). Though those are shows that I didn’t really cover outside of a three-episode rule or a post or two on other social media, so if we go by what I blogged?

I believe the last show I ‘dropped’ while blogging was Macross Delta. I really wasn’t feeling it with the show, and I felt it would’ve been better to just animate the Macross video game that bridged Delta with Frontier.

7) What anime surprised you? For whatever reason.

Magical Girl SpecOps Asuka for the sheer brutality. I admit I’m a bit into ryona, and it’s good to see a good fight. But the torture in that show is just on a different level. Magical Girl PTSD indeed. I mean I’ll probably be told MuvLuv Alternative would claim the title but to me, YOU’RE EXPECTING IT.

MGSO Asuka? We had an episode where a girl is tortured with barbeque tongs and a water spirit as well as getting an arm cut off. Holy hell how is that not shocking?

8) What is your second favorite anime?

Kino no Tabi, both the original series and the 2017 reboot. To be quite honest my top # anime are interchangeable, especially if you start adding qualifiers. Space opera? Tied between Legend of the Galactic Heroes and the Crest/Banner of the Stars series. Mecha? Gundam 8th MS Team and Macross Frontier. Romance? Amagami SS and Clannad. Slice of Life? Kobayashi’s Maid Dragon and Yuru Camp.

So to try and say ‘2nd favorite anime’ to me have to account for all of them, and it pays to explain what took the number one spot for me this time (as I’m sure the feeling will change in a little bit). Legend of the Galactic Heroes, the 110 episode epic OVA is my favorite (as of now, fickle me). So to have both Kino no Tabi series as the one to be second to that is something.

9) Do you listen to anime music outside of watching anime? If so, what’s your favourite song?

Yes, I am that person who listens to anime OP/EDs outside of anime. In my work location, I am allowed to at least listen to it at times. I think like question 8 it becomes a fickle question. So to play it safe, my -current- favorite song is “Here and There” by Nagi Yanagi, for the opening song for the 2017 Kino no Tabi series. I chose it because it seems to have captured that wanderlust that stirs whenever I watch Kino no Tabi. Hell, it was the first song I played in my new car.

Other contenders would be some oldies, like Tank! By Yoko Kanno/Seatbelts for Cowboy Bebop’s OP, Arashi no Naka de Kagayaite by Chihiro Yonekura for Gundam 8th MS Team’s OP, and Uchuu no Kakehashi by Ogura Kei for the Legend of the Galactic Heroes OVA’s 4th ED.

10) Have you ever admitted to liking anime and got a funny response?

I stopped bothering to try and explain.

A relic left behind from a group of hunters who appeared in Gensoukyou one day. They looked for elves, found only fairies, stripped them anyway and left again.
– Schrobby on danbooru. Art by sakura (medilore) on Pixiv

So, I made this recommendation on Lynn’s blog post, but I suggest reading the short story Force Multiplier by Larry Correia. It can be found either originally in the collection V Wars, Volume 2, edited by Jonathan Maberry, and published by IDW or in Target Rich Environment, Larry Correia’s short story collection. Now, some may know who Larry Correia is, and detest him for x-y-z reason or another. Or are total fans and know where I’m going. But Larry spins a tale that just ups my ‘God I hate Vampires’ meter.

I already have to deal with the mythos of the Aswang and Manananggal from my birth culture. European vampires are damn scary on their own right, and it seems only recently, within the last century or so, did the mythos get softened.

When I mean I have to deal with it, meaning I am a very superstitious and scardey person, and I will admit, that going to work during witching hour scares me at times. But to explain why I would rather be surrounded by zombies and not vampires, I’ll leave this from Mr. Correia’s afterword:

“It turns out the last person you’d want turning into a vampire is somebody who studies how to overthrow governments for a living.”

A zombie outbreak in my opinion can be mitigated, we have a whole slew of fiction that shows humanity surviving that. Hell, it’s been rehearsed as a scenario for a mass casualty exercise I believe. Vampires? Vampires on their own already are scary as all hell. Now you got some intelligent types herding the rest?

Nukes. Nuke them all. And us too. Better to not contaminate the rest of the universe with bloodsuckers.

Sleep doesn’t sound too bad either. Art by lilywhite lilyblack on pixiv.

We made it to the end! Huzzah!

So now my turn, I nominate the following (well, only nine people):

–InfiniteZenith from The Infinite Zenith

–Irina from I drink and watch anime

–tcrow from Crow’s World of Anime

–iblessall from Mage in a Barrel

Edit: Updated link for Karandi James, that’ll teach me to not be careful when I have a lot of tabs open.

1) What got you into anime and how old were you?

2) If you watch romantic comedy anime, what is your favorite and why? If not, why don’t you like romcoms?

3) What do you do outside of anime? Non-anime related hobbies.

5) Cost and restrictions not being an issue, where would you travel to for vacation?

6) You’ve won the lottery. Spend it all or save it up? (Common ‘what if’ question at work.)

7) What do you think of social media (twitter, Facebook, Instagram) outside of your blog? Helpful in getting your word out? Or a time sink and potential for trouble?

8) If you drink alcoholic beverages, what is your preferred poison? If you do not, favorite ice cream flavor?

9) What sort of music do you listen to when relaxing or doing relaxing activities?

10) What video game are you currently playing?

11) I will have to ask as well, but which is much more frightening for you? A zombie apocalypse or a vampire apocalypse?

Conservative, Patriotic and an Otaku. Recent grad of George Mason University. I am interested in firearms, politics, Japanese Anime, and military tech.
View all posts by Jusuchin (Military Otaku) →
This entry was posted in Anime, Blogging Stuff, Writings and Roleplay. Bookmark the permalink.

9 Responses to Let’s bring some sunlight into this place. – The Sunshine Blogger Award 2019