Only fair since I did it for Kantai Collection and Arpeggio of Blue Steel Ars Nova and their movies. Even if I’m not fully into the lore or even simple game mechanics to be able to spot when they get animated. So that said, I have people who played AL saying that it hasn’t blown their socks off, while I’ve seen rumblings online from the AL diehards that this will sink KC for sure. So where exactly is it? And yes I put in the screenshot of Enterprise as the top image because, well, Enterprise.

EDIT: Metal Blood -> Iron Blood, as someone pointed out to me. I was stuck with Metal Blood from my old understanding of the game.

I don’t really have much apart from what I posted on twitter and Facebook. I’m intrigued. The source of conflict seems more in line with human nature than any true existential threat as a whole. Okay I take it back, the Sirens are obvious power players forcing the world to unite into four camps that in turn turned into a overall ‘faction’ against the Sirens. But when peace is achieved, human nature once again falls back. 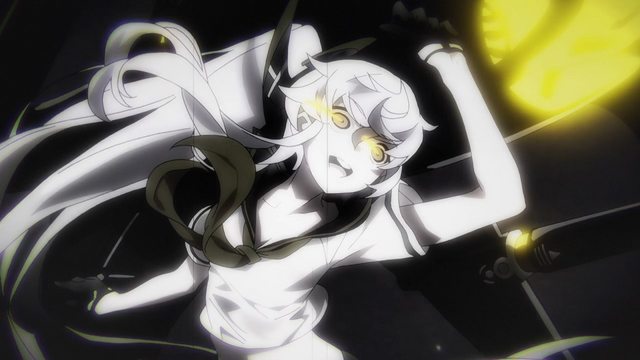 In this case, two factions in Azur Lane believe to beat Sirens, one must utilize all technology obtained from studying them. The other believes in beating Sirens without using this taboo. Thus, the source of conflict for the show as these two viewpoints clash to a point where neither can convince the other to follow along or to halt. 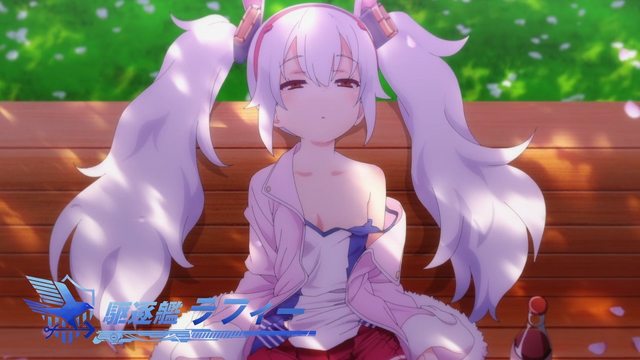 Now, I do have some niggles, mostly in character design. Pretty sure most people already know this, but AL is more fan-service than KC ever was. But unlike KC, which was hammered by bureaucratic red tape that makes a response to Godzilla rampaging in the streets seem fast, AL’s developers went full steam ahead. Rolling out with global servers, a massive marketing push, and now, an Anime where it seems that at least the story bible was consulted. 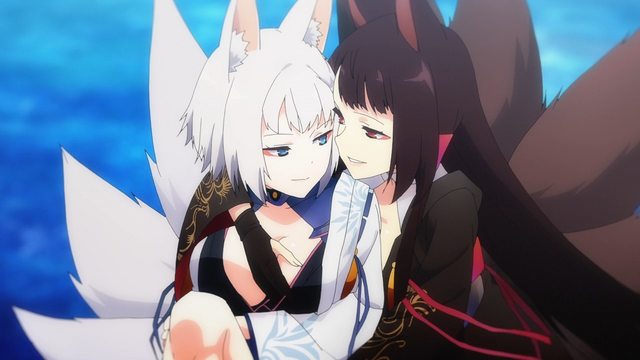 There is also the fact that Prince of Wales and Illustrious didn’t deploy immediately like Cleveland. Cleveland was easily the heaviest tonnage ship fighting in the harbor for Eagle Union/Royal Navy. Or as a friend put it: “We should really deploy, but we gotta finish this tea.” There is also some drops in animation quality which seems to be glaring in some scenes, like when Prince of Wales was introduced. 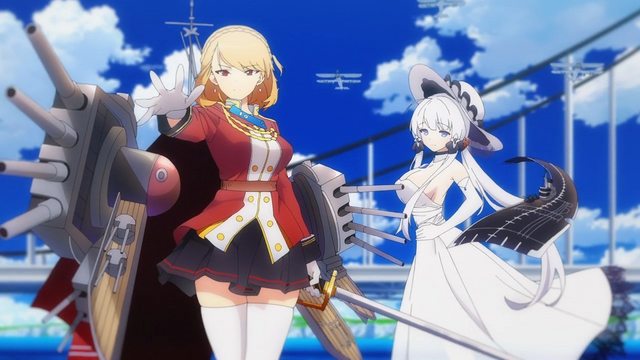 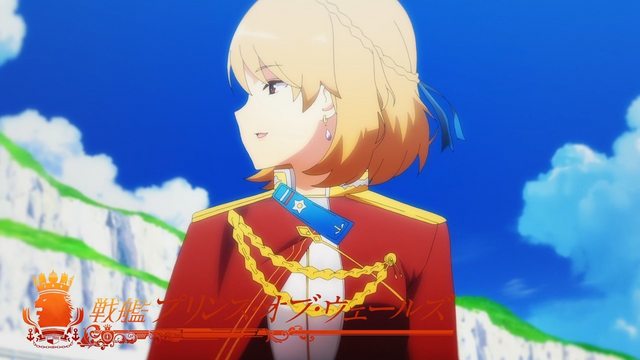 But really, apart from the costume design that is really more a consequence of its start, I’m liking aspects of the show. With Unicorn’s U-chan, and Kaga’s summoned spirit…thing, Azur Lane pushes the view away from technological to more magical in terms of how shipgirls work. As if the blatant transformation sequence wasn’t enough. It at least didn’t require some wonky Iron Man-esque thing where the equipment is stored underwater and requires a relay race sort of montage to mount. Or as the same friend put it: “None of this makes sense, AL just doesn’t care.” 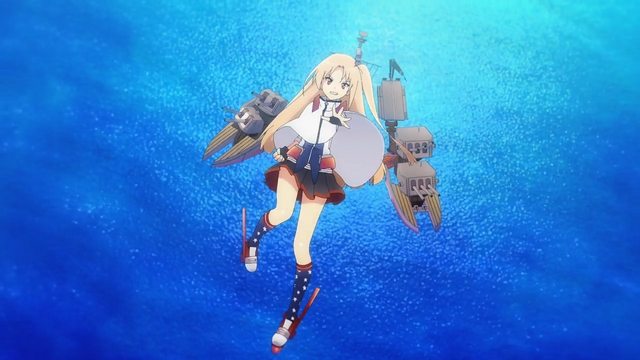 So yes, the show is enjoyable, and this is coming from one of those KC diehards. I know some may hate it, while some are absolutely going bonkers on social media, T-posing over detractors. And some are just enjoying it. Will the plot be better fleshed out in the coming episodes? I hope so, because the first episode is already more decipherable and understandable than Kantai Collection’s anime. 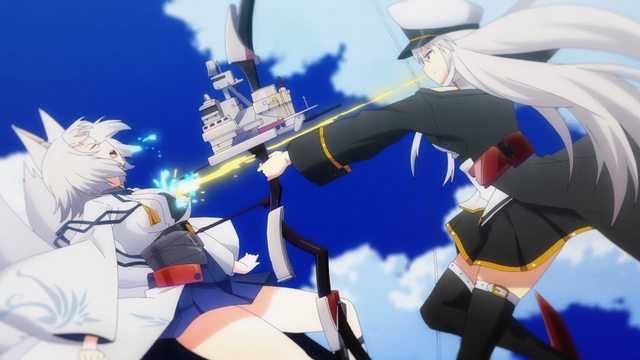 Summary will be brief.

Opening narration talks about humanity’s move to the seas resulted in conflict, until the Sirens arrived and pushed humanity back. Humanity formed the organization Azur Lane out of four factions, Eagle Union, Royal Navy, Iron Blood, and Sakura Empire. When peace was achieved, competing interests once again took hold and the world was running down a road of conflict as war never changes. 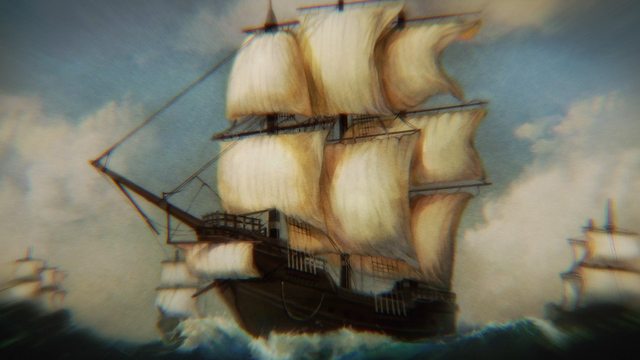 At a base, various Eagle Union and Royal Navy ships are gathering, with the Eagle Union cruiser Cleveland being escorted around by the Royal Navy battleship Prince of Wales. Various ships are enjoying themselves while the Sakura Empire destroyer Ayanami seems to be wandering around. 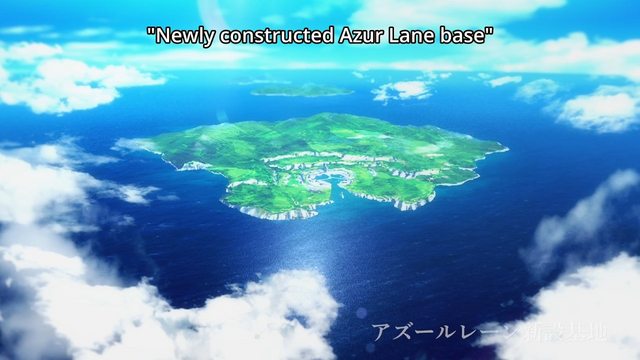 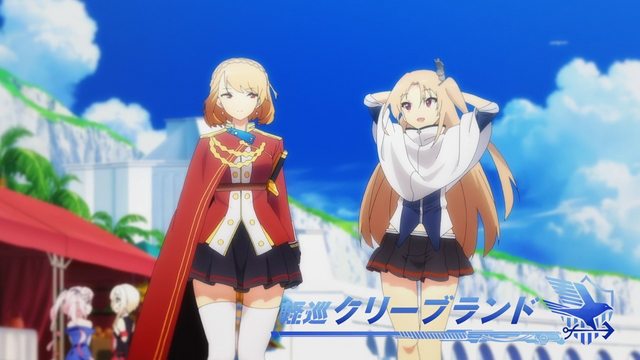 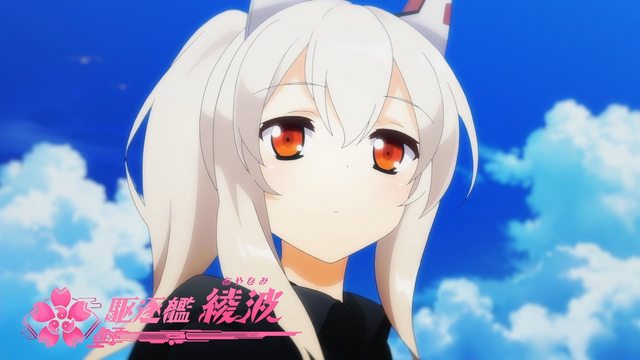 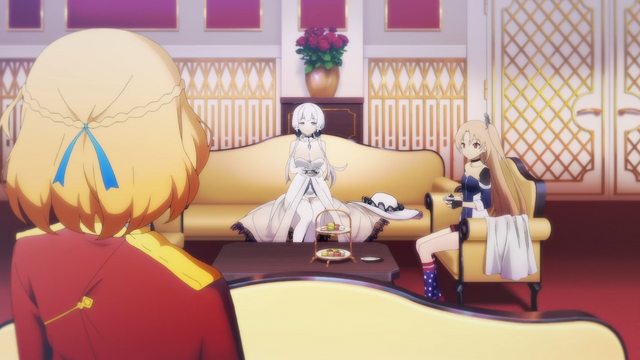 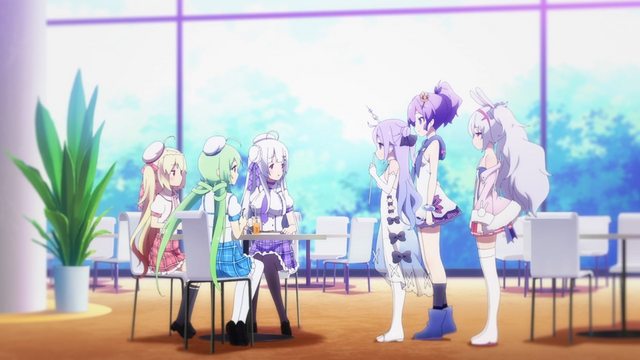 Searching far and wide, they reach the top of the snow-white cliffs to find U-chan and an unknown shipgirl. Before the unknown can give her name, the girls are buzzed by what seems to be star-shaped plane. When they recover their wits, the mysterious girl isn’t found. She had scampered off to some trees, reporting into her superiors via the shikigami. 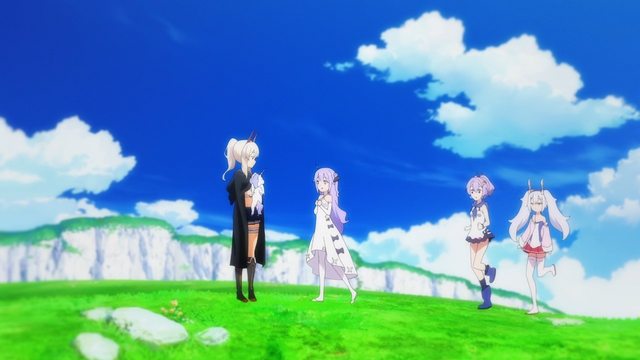 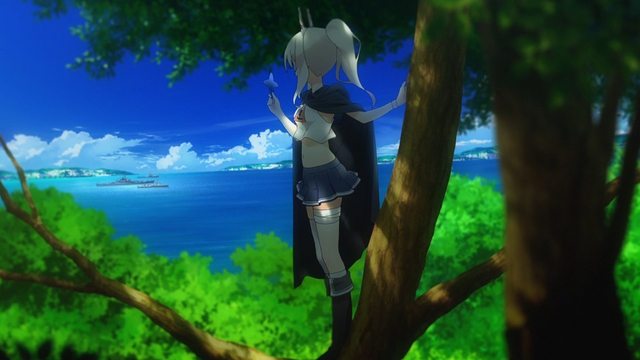 Far into the sea, two fox tailed carriers watch, the black haired one, Akagi, mentions that battle is the ultimate expression of love, while Kaga, the white haired one, only seeks to destroy her enemies. The base would come under attack, as Siren aircraft strike the fleet in anchorage. 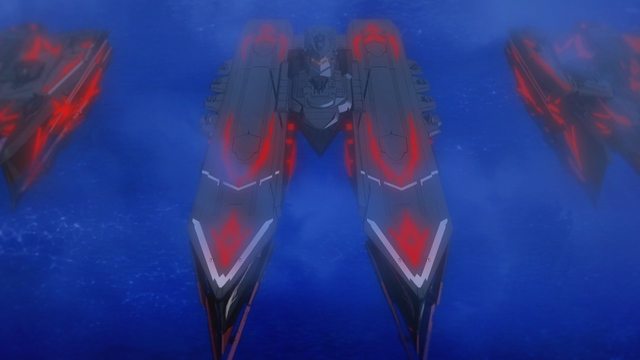 Cleveland and others rush to the defense of the harbor until Kaga appears to personally take down Unicorn with her summon and Ayanami fights with Javelin. Before anything serious happens, Enterprise appears and turns the tide, defeating Kaga’s summoned familiar and forcing the Sakura Empire ships to withdraw. Before they do, they issue their declaration of war and alliance with the Iron Blood faction. 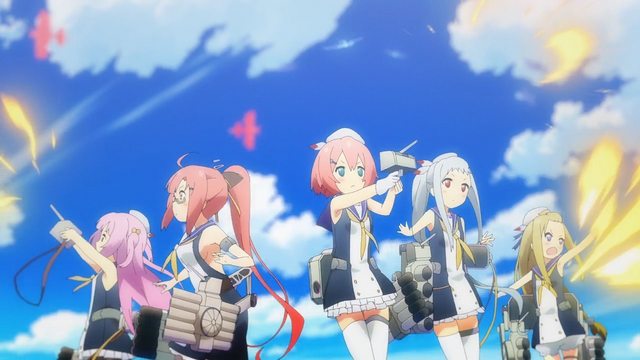 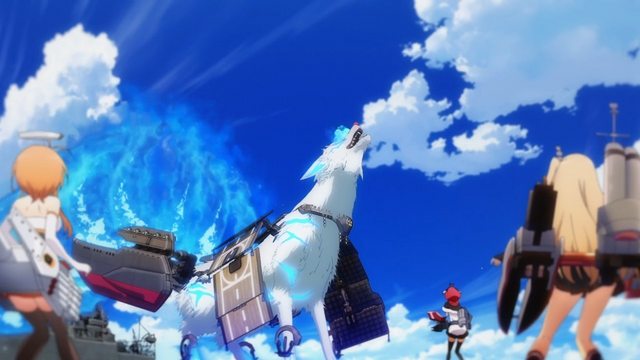 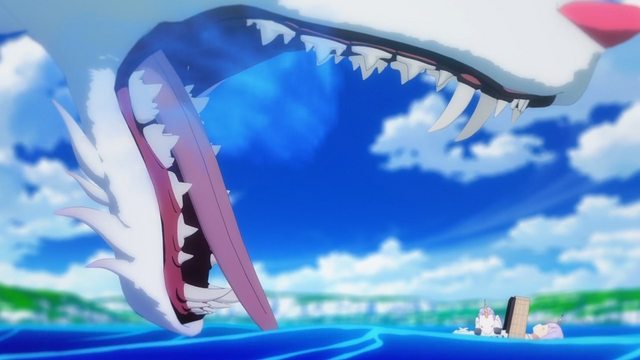 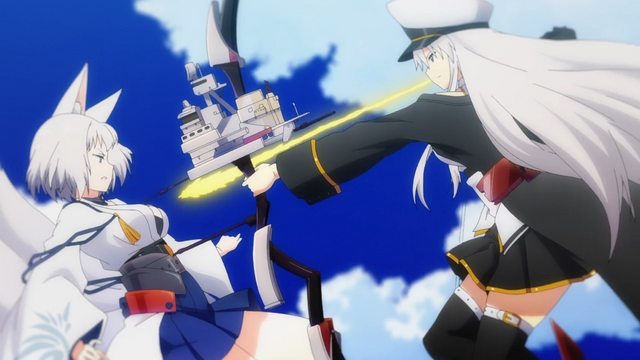 Thankfully, the battle wasn’t as bad due to the arrival of Eagle Union’s greatest warrior, Enterprise. 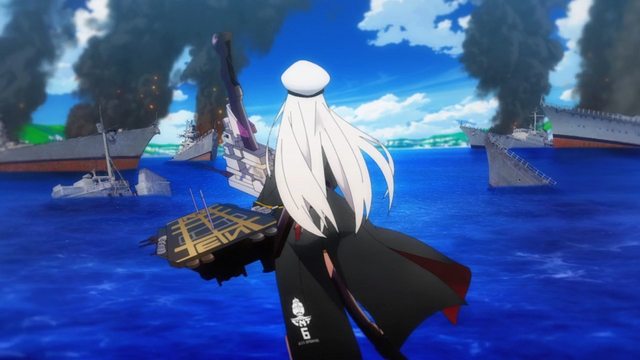 Conservative, Patriotic and an Otaku. Recent grad of George Mason University. I am interested in firearms, politics, Japanese Anime, and military tech.
View all posts by Jusuchin (Military Otaku) →
This entry was posted in Anime, Azur Lane: The Anime, Three Episode Rule. Bookmark the permalink.