That cliffhanger reference made me scream ‘Goddamnit’. Also, we’re treated to a little teaser of the Metal Blood forces in the form of Prinz Eugen and Z23. 5th Carrier Division being a bit more ‘bad-ass’ than in KC. And quite a bit of a rant below. 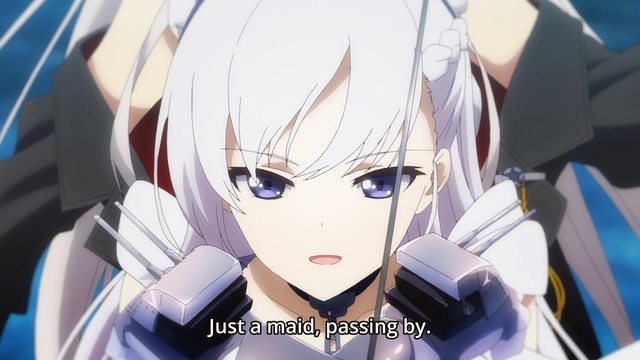 My first reaction watching this episode was “this is reaching Seikon no Qwaser” levels of lewdness. Laffey disrobing Javelin and herself just minutes after the opening song is a bit too much. 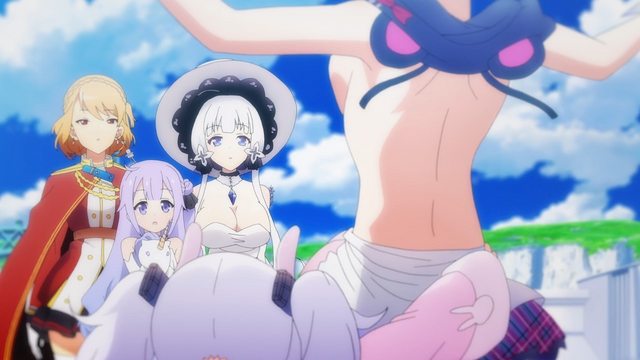 There is also the nearly shot-for-shot reconstruction of the aftermath scene from Pearl Harbor as some have pointed out.

I’m a little off put by the chicken…things. They’re called ‘manjuu’ and are the mascots of one of the game’s parent developers (Shanghai Manjuu, the other being Xiamen Yongshi). They did have to show the manjuus somehow, and are the AL equivalent of the fairies from KC in the show. I think of all the ‘military’ shows, I think HaiFuri, Arpeggio, and Brave Witches at least showed forces other than the main characters in some capacity. Actually, I think HaiFuri in revealing and showing the instructors and whatnot did it best.

The so-called rivalry between Zuikaku and Enterprise was seen. Not too sure how much of a true thing this was and not just revisionist romanticism from the anime/gaming community. There has to be a rivalry, and between WWII vessels, Zuikaku is seen as such with Enterprise. The ship that sunk last and the ship that never sunk. I’m going to have to give this to AL, Zuikaku is a bit more up front and confident than KC’s Zuikaku. 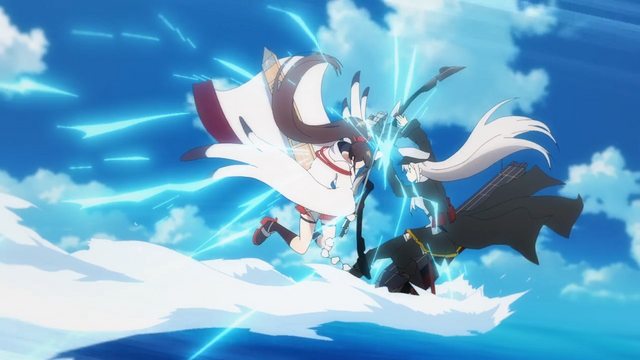 That confidence seems to be quite a boost, defeating five out of six ships singlehandedly, leaving Hornet as the only combat effective vessel in Hammann’s little task force before being saved by Enterprise. Just how ineffective can you be and inattentive, when you can’t launch your own air cover. The air power should’ve given both Shoukaku class carriers some pause, especially with Helena being there (a Brooklyn-class/St Louis-subclass). She was a ship whose very refit centered around increased AA Batteries. But nope, two carriers utterly defeated you. The order of battle should’ve been air sorties from Hornet and Long Island, AA support from Helena, with hit and runs from Hammann and cannon barrages from Arizona and Northampton. 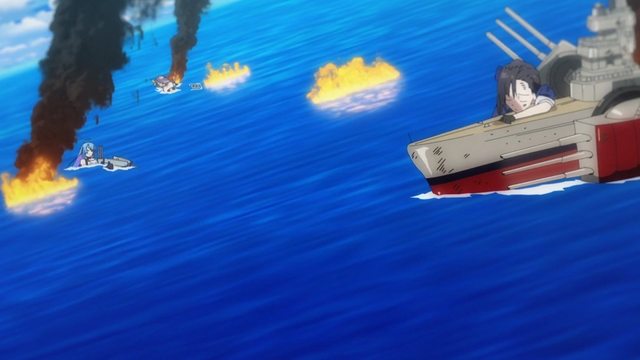 Nope, just nope. Not until Enterprise comes to steal the show. 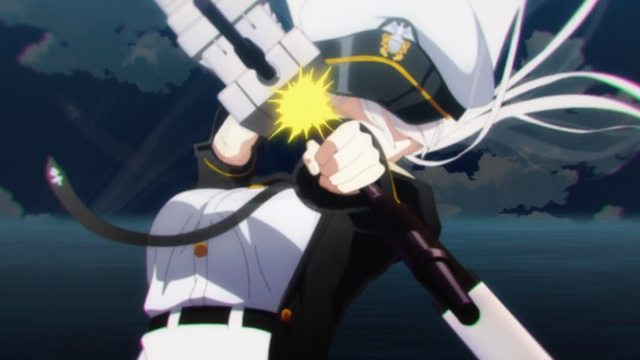 Enterprise is really being obnoxious. I was watching this show with a friend, and apart from the comments about the increased lewdness, both of us were saying any sane commander would’ve docked Enterprise until she was at least repaired properly, but I guess the nod to history was needed. 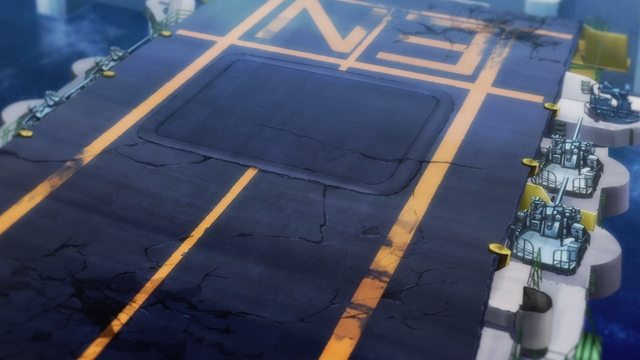 The USS Enterprise was at one point the sole shield and sword against the Empire of Japan in late 1942, having set sail to fight against the Japanese with workers still repairing her deck at sea, and it was shown in the anime when she fought against Zuikaku, being the sole striking force in the area capable of rapid sortie against the 5th Carrier Division.

Speaking of that fight, I was quite audible in my surprise when Belfast appeared to save Enterprise from Zuikaku’s charged strike. The entire time, Enterprise had the upper hand against the Sakura Empire shipgirl before her over-taxed equipment broke. A testament to her power in being able to hold off against 5th Carrier Division (as Shoukaku and Zuikaku was grouped in at the start of the war and known as such in various media). 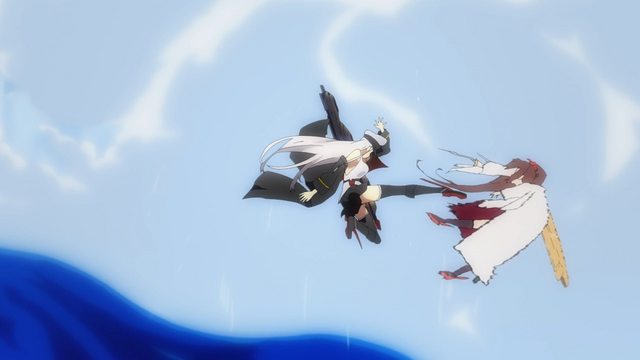 But back to Belfast, her ending the cliffhanger in such a way was great. But her line was what made me yell ‘Goddamnit’. I knew the anime was calling out to various other shows and movies to compliment the massive amount of fanservice, but did we really need a Kamen Rider Decade reference? 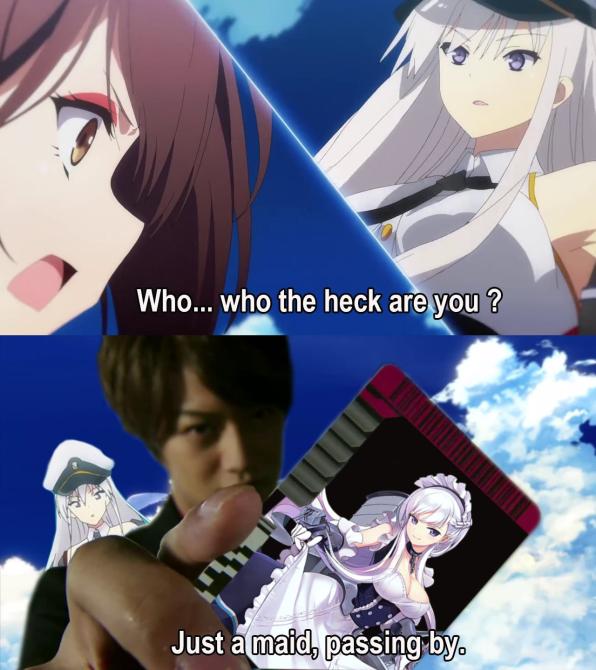 There is also something amiss with that plushie. 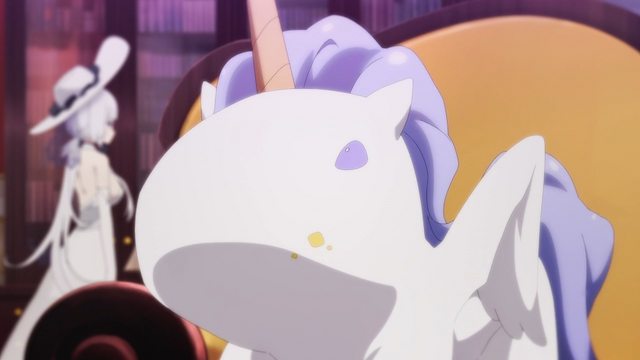 The origins of the shipgirls are revealed to be crystals obtained from fighting Sirens, allowing humanity to be able to fight back but being humans, they also fight among themselves. 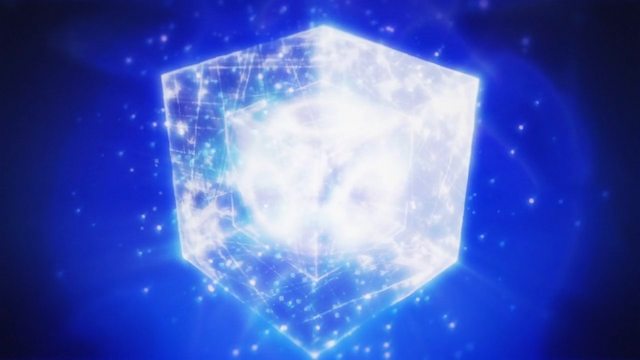 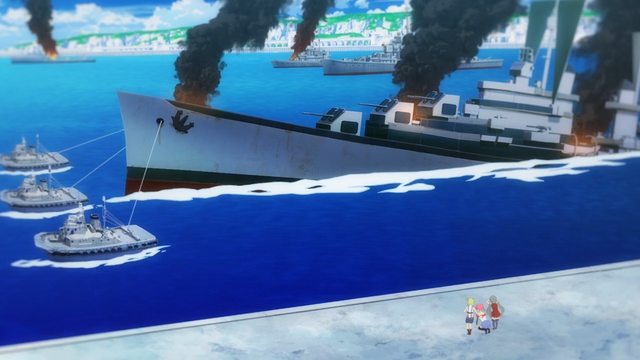 Elsewhere, Akagi and Kaga are licking their wounds, well, one of them are, when Metal Blood cruiser Prinz Eugen shows up. There seems to be some friction between allies, but Akagi manages to convince Prinz Eugen to sortie against a patrolling force of Azur Lane ships. 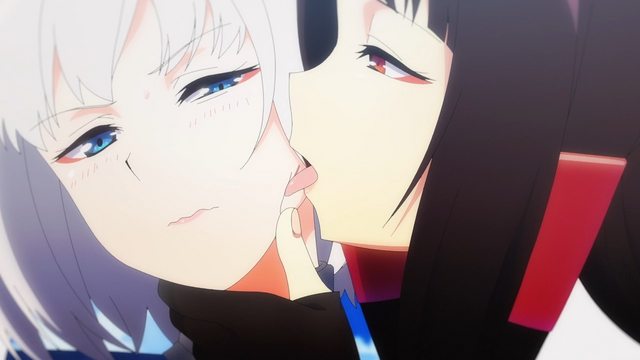 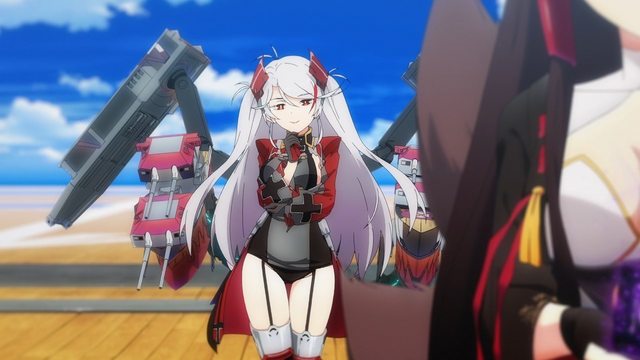 Back at the base, it seems Javelin is worried about Ayanami before Enterprise shows up. Noting her damage, Javelin asks why does Enterprise push herself so much. Enterprise states her purpose is to fight, but Laffey comments that she doesn’t like it when people pick on her friends, and with that Laffey, the sleepy head character, will work hard. A rather round about way to add some humanity as kanmusu. 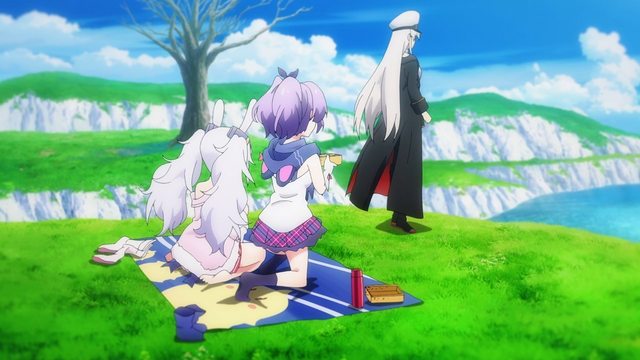 Back in the open ocean, a task force comprised of the Eagle Union ships Arizona (Battleship), Hornet (Aircraft Carrier), Northampton (Cruiser), Helena (Light Cruiser), Long Island (Light Carrier), and Hammann (Destroyer) are sailing back to base at best possible speed. 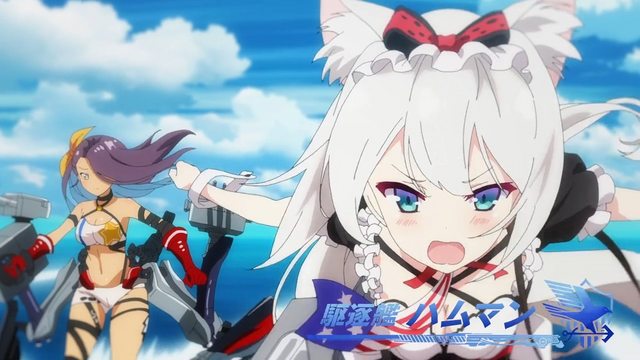 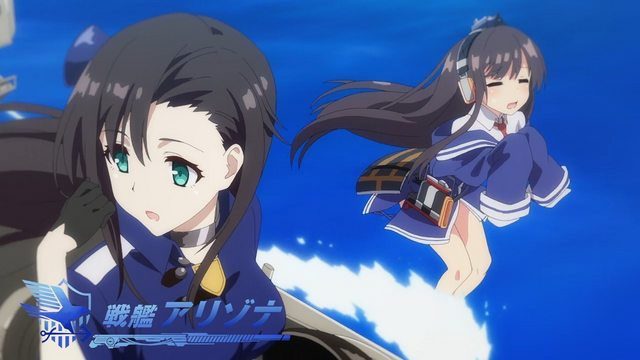 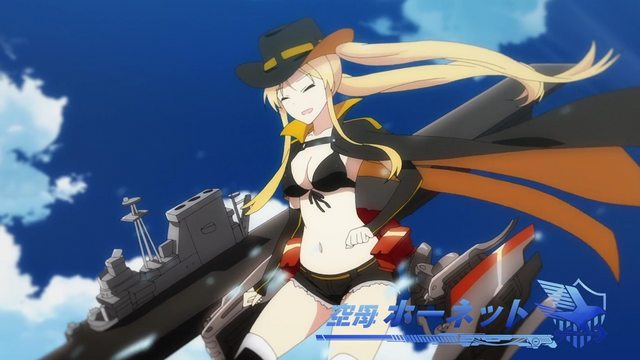 They are then set upon by 5th Carrier Division comprising of Shoukaku and her sister ship, Zuikaku. Back at base, the forces muster a response, but it seems Enterprise already went, with Cleveland, Laffey, and Javelin following closely behind. 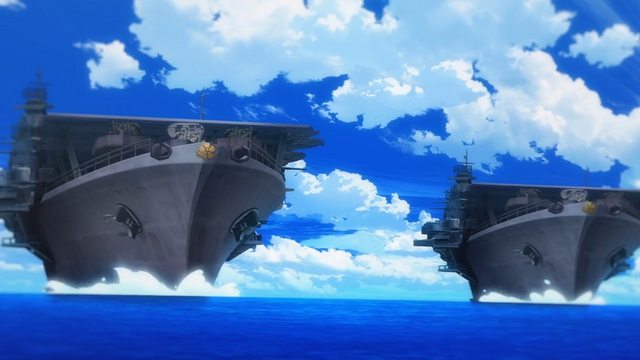 The battle went poorly for the task force (see paragraph of rant) and Hornet was saved at the last second by Enterprise who proceeded to take on Zuikaku one on one.

Before Cleveland and the others can extract the Eagle Union flotilla, Z23, Ayanami, and Prinz Eugen arrive to cause merry hell on the flotilla with their Siren slaves. Elsewhere, a flotilla of Royal Navy ships commanded by the Battleship Queen Elizabeth is informed of the situation and one of the ships, the Light Cruiser Belfast, is seen rushing ahead. 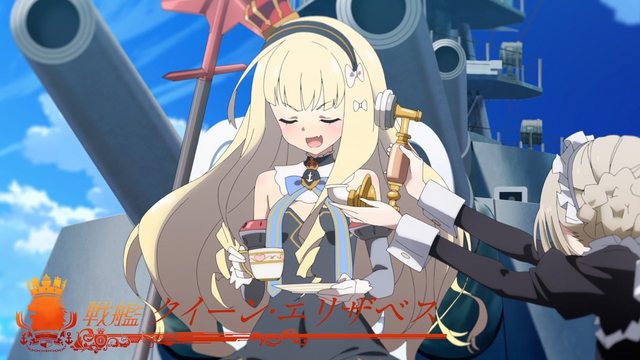 Back in the battle, Laffey having offered herself to break through Metal Blood’s lines, seem to be taking it all too lightly as her possible narcolepsy is kicking in, while in the more serious side of the battle, Zuikaku is being bested by Enterprise until the Grey Ghost’s equipment breaks. Zuikaku powers up her sword and is about to slice Enterprise in half before being blocked by the metal bracers on Belfast’s forearms. 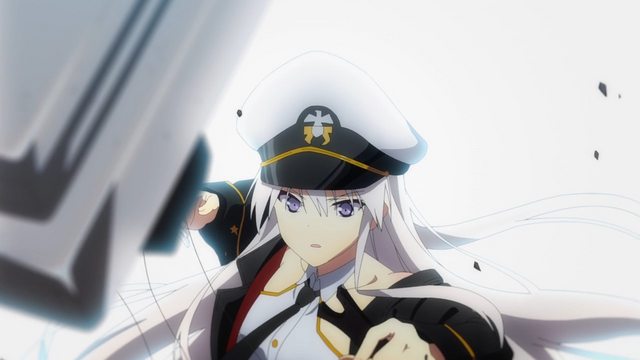 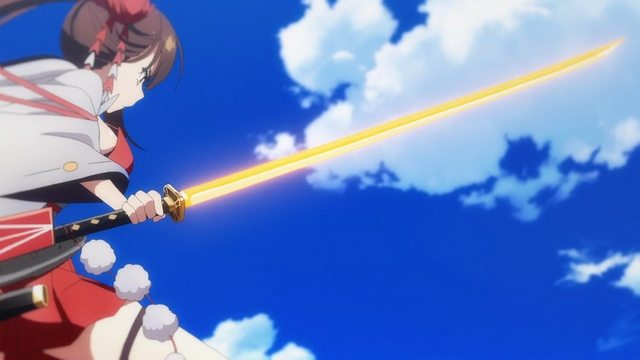 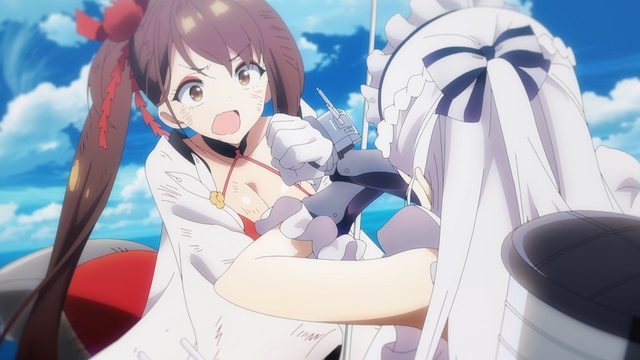 Asking who she was, the light cruiser just responded with “Toorisugari no meido de gozaimasu” (Just a passing through maid).

Conservative, Patriotic and an Otaku. Recent grad of George Mason University. I am interested in firearms, politics, Japanese Anime, and military tech.
View all posts by Jusuchin (Military Otaku) →
This entry was posted in Anime, Azur Lane: The Anime, Three Episode Rule. Bookmark the permalink.