I think I’ll be joining the chorus of Enterprise x Belfast shippers who want thin books of the two of them come next Comiket. Also, the plot thickens. And I don’t mean about Akagi’s little side project. I’m liking Sheffield, I’m a bit of a fan of the maid motif and the battle maid type in particular, so her going all gun kata against Takao and Kaga was fun to see. If only the animator’s budget didn’t go into Kaga‘s wolf…thing.

Seems like the Maid Branch of the Royal Navy is truly the Special Boat Service. I mean, you get to get a wakeup call and the like. Get tea, a good breakfast, and special reconnaissance roles. I am so gonna be roasted on discord and Facebook for this pun am I? 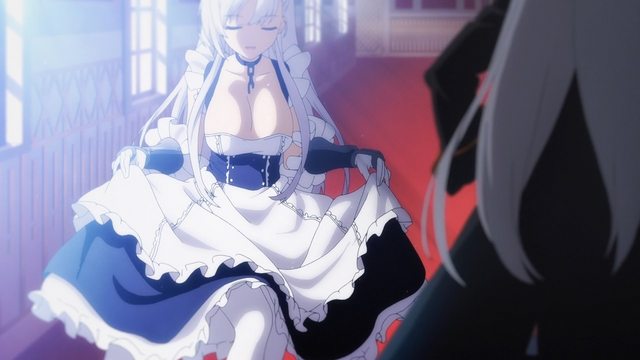 I gotta hand it to em, having better disguises than Ayanami did when she was scouting out the newly created Azur Lane base, Sheffield and Edinburgh at least wore appropriate clothing and masks. 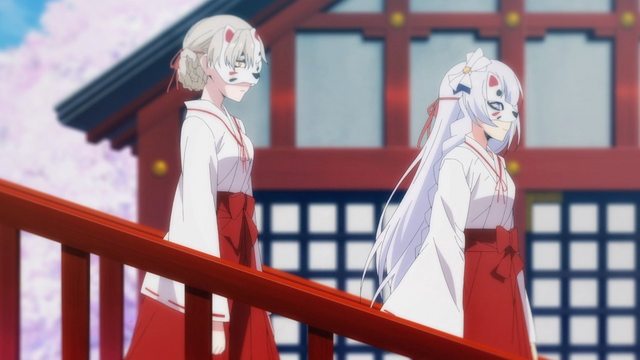 Even if she was unsuited to the job, being the clumsy girl that she was, Edinburgh still manages to help Sheffield in conducting their special reconnaissance duties and with the help of the fugitive Akashi, evade their pursuers at least long enough to get out of Sakura Empire territory. 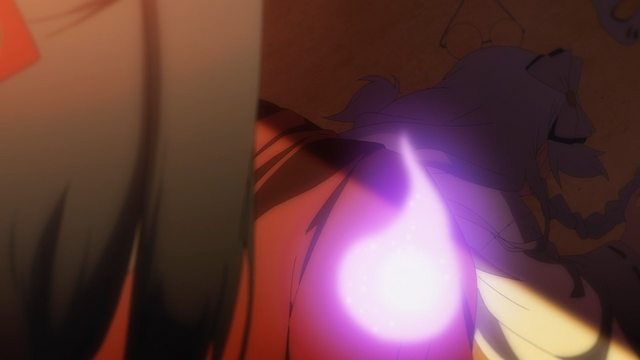 Speaking of the Sakura Empire, a fair bit of backroom moves by Akagi. I honestly am not shocked that Nagato, the nominal leader of Sakura Empire, would be disapproving of Akagi’s schemes but with results showing, gives her tepid approval. It seems similar to the time right before Tojo and his fellow militarists became the de facto shoguns of the Empire of Japan, with a weak moderate cadre of politicians and military leaders unable to reign in the hawks. 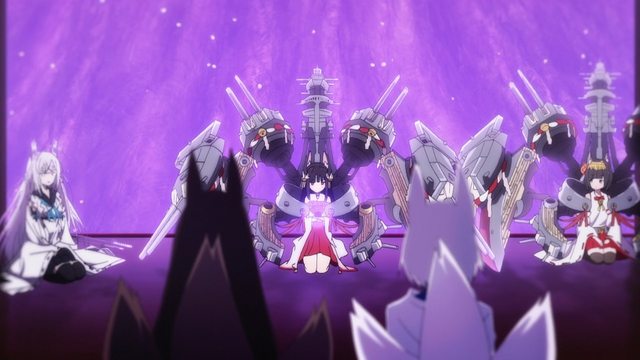 Briefly, I’m amused that Sakura Empire’s island made me think of Onigashima, the island of demons. The motif for Japan is there, with exaggerated pagoda structures, torii much like Fushimi Inari-taisha’s thousand torii walkway, and cherry blossoms galore. And much like the island in the story of Momotaro, there is more darkness to be found under the nearly theme-park feel of the island. 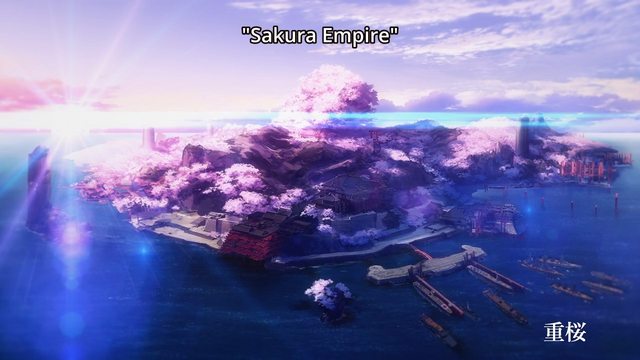 To protect the nation from the Siren threat means conspiring with a Siren mastermind named Observer. She at the moment is at least party to helping Akagi build a mass-produced Siren/Sakura Empire ship with the aid of the black boxes she gifts. 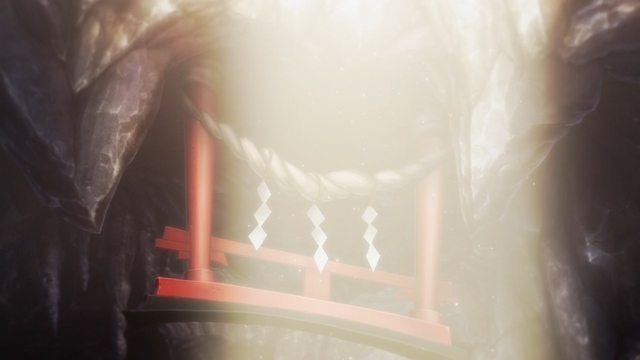 This isn’t helped when the scheme is discovered by Akashi who had wandered the secret research areas. Already it should’ve been a warning with the inverted torii looking more like the jaws of an oni when she wandered around the caves. 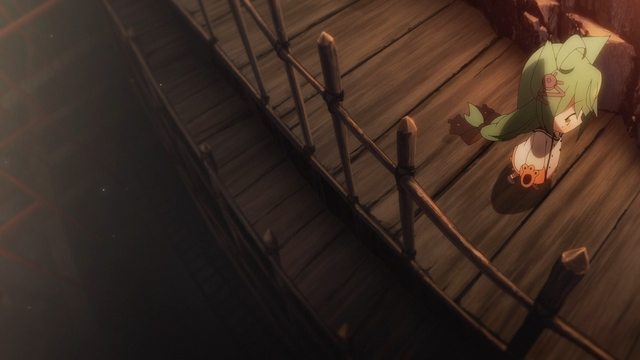 Whatever fate awaited the repair ship was cut short though as Sheffield and Edinbrough come out of the shadows and attack, managing to escape from the two carriers and mastermind with Akashi in tow. This allowed for a fight between Takao and Sheffield in which Sheffield was coming up to be the equal of Takao with her sword and Sheffield with her rapid-fire cannon equipment. Though the animation could do with a bit of work. 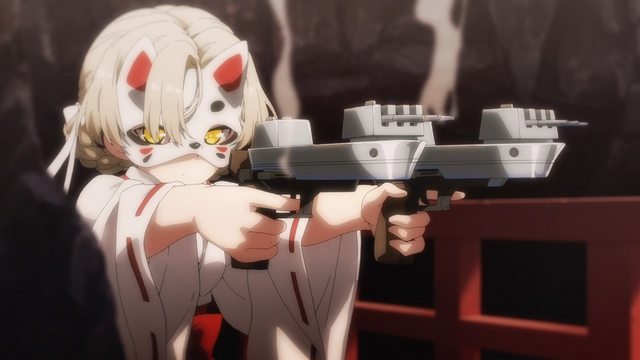 Other than that, back in the Azur Lane side of things, it seems Laffey still believes that they can be friends with Ayanami, who seems to be having similar doubts, choosing between her duties and what she wants. For Iron Blood, a bit amused though at the puppy trio of Yuudachi, Shigure, and Yukikaze. They were all veterans looking up to the other destroyer in awe, all the while annoying Z23. 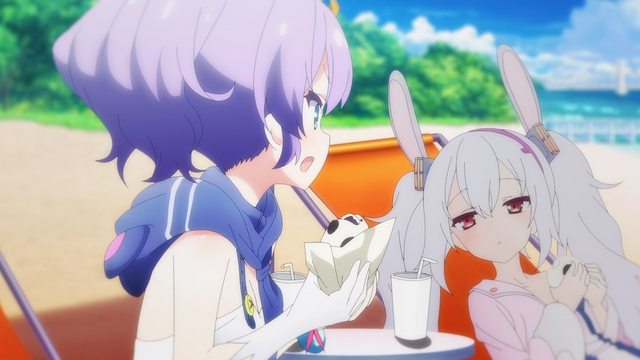 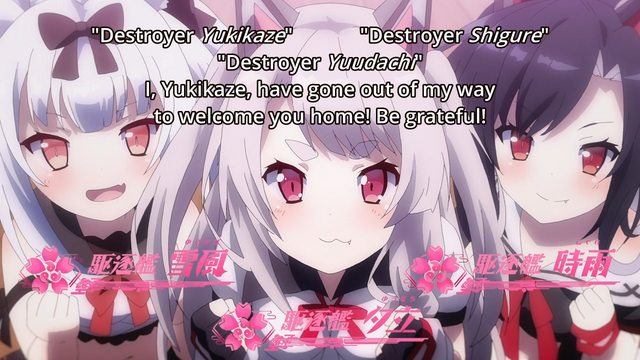 Zuikaku still can’t get over her defeat to Enterprise, though I’m amused she isn’t equally annoyed at Belfast for interrupting what should’ve been a sure-fire kill. Much like in Kantai Collection, I gravitated towards Zuikaku in Azur Lane because she actually looks like someone who has some drive. She wants to be better and stronger, even if the motivations are different. In Kantai Collection, is so her superiors in the 1st Carrier Division can stop looking at her as a child, and in Azur Lane, to overcome her storied rivalry with Enterprise. 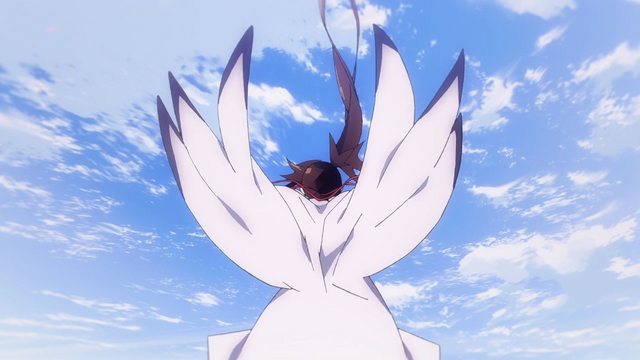 Speaking of, Enterprise now has a shadow and a caretaker in the form of Belfast, who seems to be pushing her ‘gentlewomanly’ qualities on the taciturn and results driven carrier. Enty is probably annoyed but she allows it to happen, no doubt liking some of the attention. Enterprise strikes me as the type to never have had anyone close to her apart from her sisters, and by being put on a pedestal, unsure how to handle being with someone who can treat her as an equal of sorts. 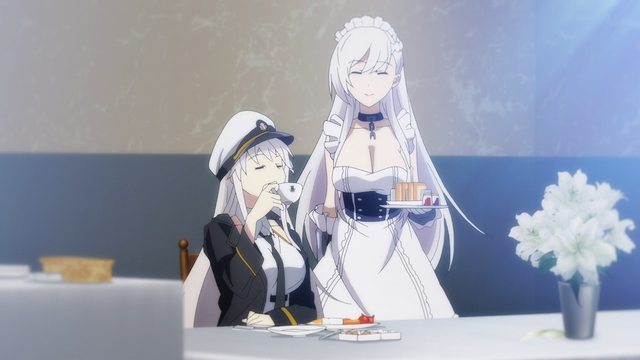 Overall I enjoyed this episode plot-wise, it adds a bit more intrigue to the goings on between humanity and Sirens, and makes me appreciate the glutton Akagi from KanColle more than the scheming one from Azur Lane. I do want to note there are portions of the show that seem to have degraded in animation, as one of the people who I discuss the episode with have noted and I picked up on after a second review. It was especially telling in the duel between Sheffield and Takao, and it really broke what could’ve been a quite awesome scene. 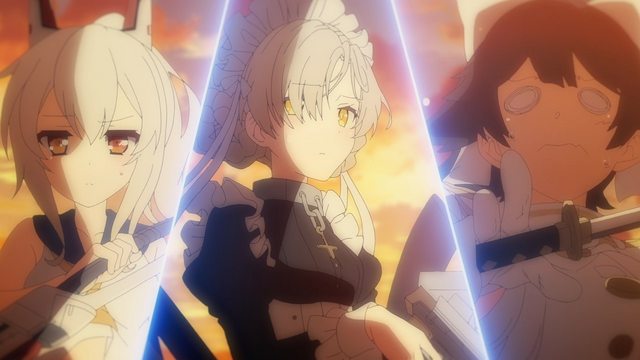 Back in the Sakura Empire, the members of the expedition to attack the Azur Lane base are welcome back, some with enthusiasm. 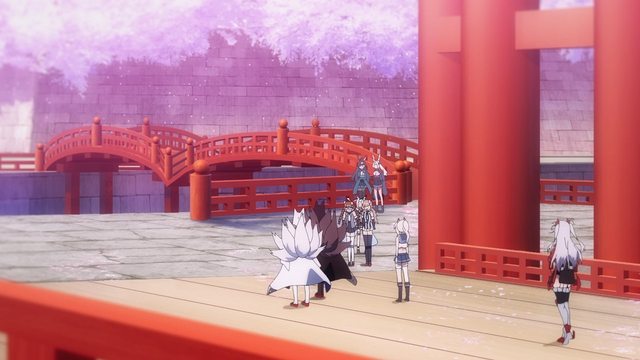 At Azur Lane, Belfast is seen shuttling Enterprise around and trying to ‘refine’ the carrier. Though pampering the carrier seems to be a clash of cultures, between the duty-bound and git-r-done attitude of the Eagle Union and the more refined and ladylike Royal Navy.

It seems the Dragon Empery ships have managed to fit in nicely, managing a beach-side stand selling filled buns with Hammann as their helper. They would give some buns to Enterprise and her shadow as thanks for rescuing them. On the beach, Illustrious watches over Unicorn, Javelin, and Laffey though it seems Laffey wonders if they would ever share a meal like this with Ayanami. 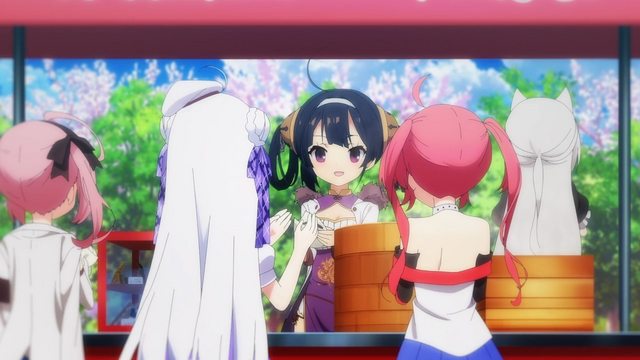 Later, the two Dragon Empery ships give their report to Azur Lane’s leaders, explaining that they discovered a Siren mastermind who seems to be taking advantage of the infighting between the various factions of humanity.

Enterprise is concerned with this, to which Belfast explains to Enterprise that the Maid Corps of the Royal Navy are already investigating. It cuts into a view of one of the various shrine-like steps where two disguised Town-class Light Cruisers Sheffield and Edinburgh.

Meeting with Nagato, Akagi seems to have gotten tacit approval for her side project, though walking away, Kaga notes she lacks determination. Akagi corrects her, only to say the same thing though in a manner befitting her own personality.

At a restaurant, Z23’s meal is interrupted as Yuudachi, Shigure, and Yukikaze pester Ayanami for her deeds in the battle, even if it means Ayanami is unable to live up to their expectations of her as ‘The Demon’. 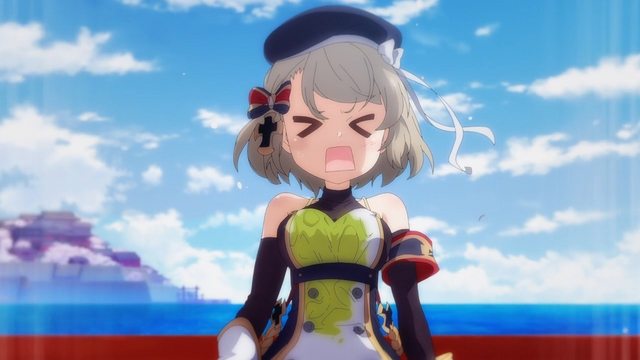 Zuikaku meets with Takao, no doubt her senpai when it comes to the blade, who seems to be trying to soothe the pride of the carrier who was close to ending her rivalry with Enterprise before it was interrupted. She is taking on all these burdens, trying to be stronger as to be able to protect her family and friends. 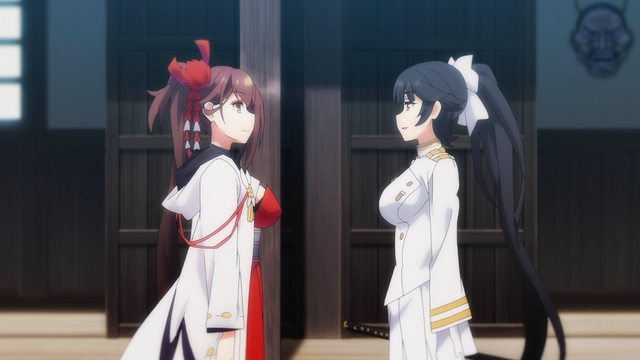 As the sun sets, the two infiltrators are almost discovered by Shiranui, but manage to bluff their way out of it, while Akashi is lost in the cave systems under the island, stumbling upon Akagi and her secret Project Orochi. Orochi being the eight headed demon that the God, Susanoo, had lured into a drunken stupor and killed. 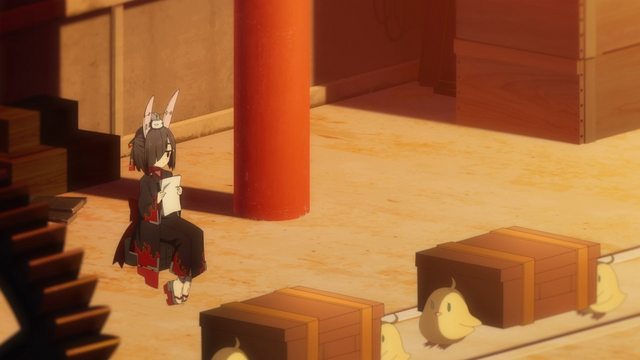 It is here that Akashi discovers the secret to the black boxes that allows the Sakura Empire to control the Siren ships, they are all gifted by a Siren mastermind named Observer. She is discovered by Kaga and about to be blasted away by Observer before being stopped by Akagi, who was no doubt going to silence her in some manner before Sheffield made her move, blasting at Observer to free Akashi and causing Akagi to drop the new black box she obtained from the Siren where Edinburgh was able to flee with it. 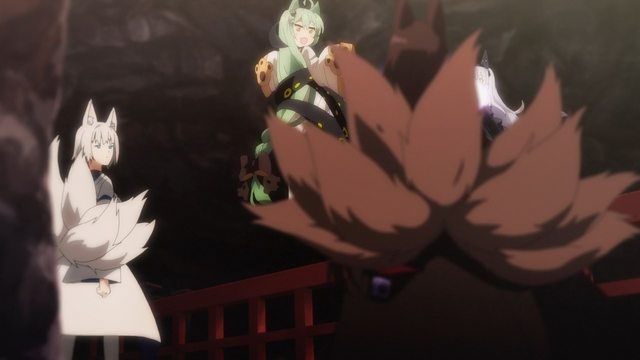 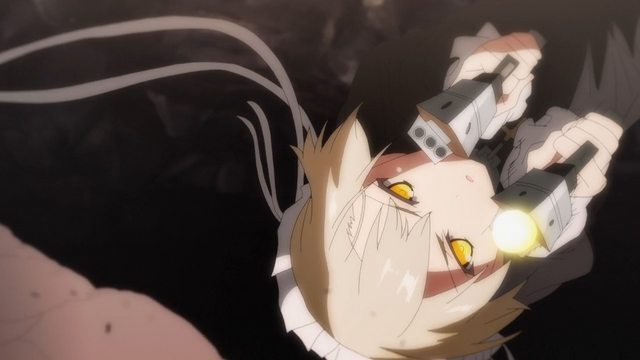 The two Maid Corps ships escape, Akashi in tow, before they are intercepted by Takao. Takao and Sheffield are about equal in skill with the Katana and dual weapon mounts (handguns). Managing to hold off Takao and the newly arriving Ayanami. 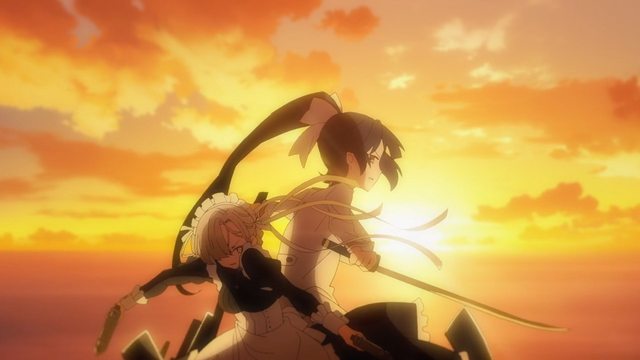 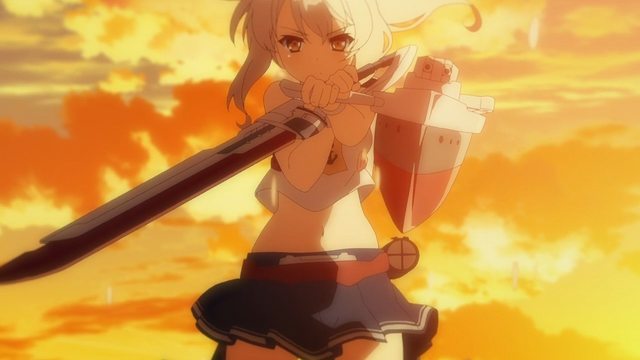 At a stalemate, Edinburgh happens upon unexploded ordinance and sails towards the standoff before the thing explodes, and afterwards the Maids and repair ship are nowhere to be seen. 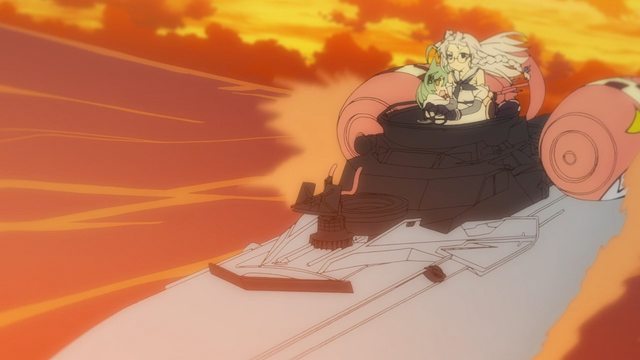 Akagi sees this as a sort of positive, seeing that it seems they’ll be using Azur Lane to incubate the black box for them even as they’re going to organize a force to pursue the spies and defector. Back on the dock, Ayanami is greeted by her admirers, who she states are her friends but reminded of the kindness the Azur Lane ships gave her. 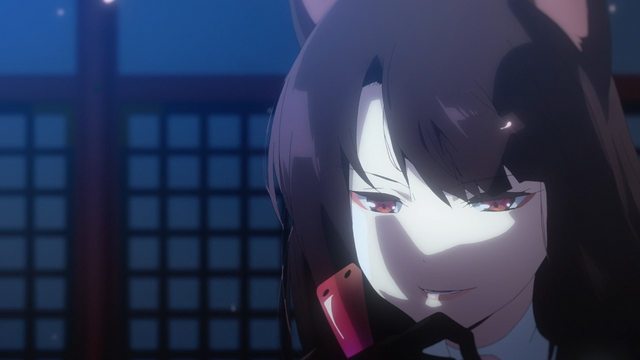