I’m going to try and get this done every week or so of December, let’s see if I manage to do so. I’m already late with this one since I pushed back my Azur Lane post. Overall, we are getting to the meat of what made the original OVA great.

Managing to recall Caselnes from the frontier, Yang gets his own house into order as the political machinations back home and abroad start to grind. Accepting Imperial Navy High Admiral Siegfried Kircheis’ peaceful intentions for a prisoner transfer, the two meet and take stock of one another as prisoners from both sides are exchanged. 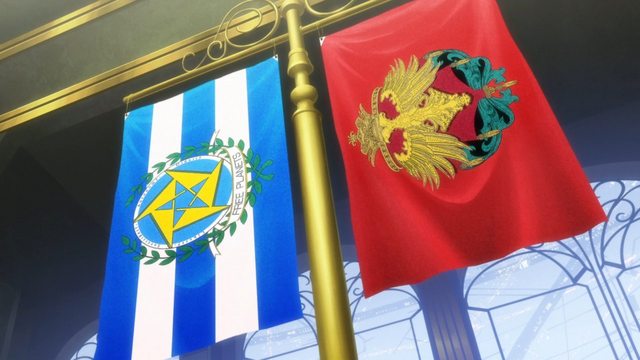 During the ceremony, Kircheis makes an impression on Julian (as well as most of the female staff on the base). But overall, Yang sees through this plan and tries to take appropriate measures to mitigate Reinhard’s true plan. Kircheis relays this as much to Reinhard when he reports back after the exchange. 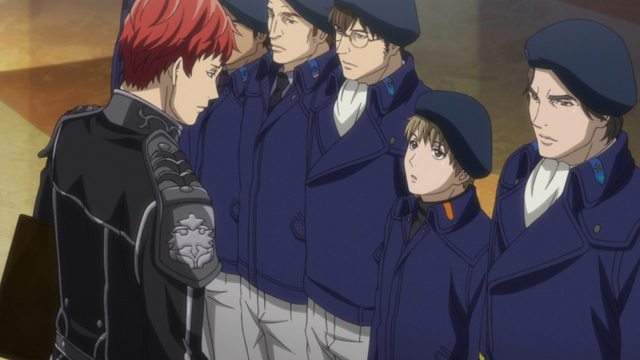 Back on Heinessen, Yang informs Admiral Bewcock after the arrival ceremony of his concerns at a clandestine meeting at a park. He explains to effectively cripple the Alliance; Reinhard needs to stage a coup d’état using agents mixed in with the returning POWs. With 2 million potential suspects, they can’t possibly find them all but they will try to minimize the risk presented. 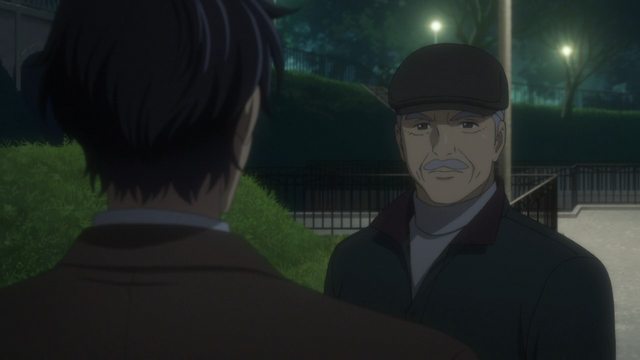 As it stands, in some shady warehouse district, the core of a coup is meeting. On the question of Yang, the coup is banking on the distance between the capital and Iserlohn fortress as well as the ring of defensive satellites around Heinessen (the Artemis Necklace). Though Commodore Falk, the planner of the disastrous invasion of the Empire, suggest placing men in the Fortress to assassinate him when the time comes, and the coup’s leader, Admiral Dwight Greenhill (Frederica’s father) is overruled. 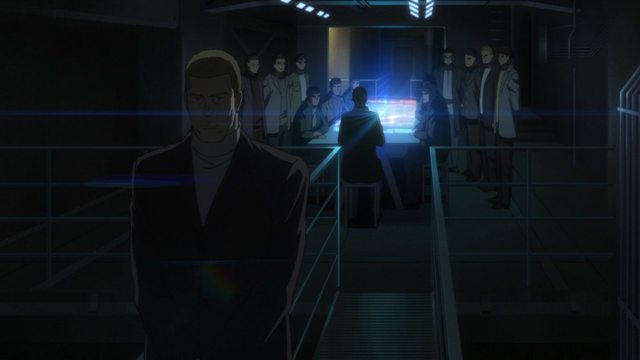 In the corner drinking away, a certain Rear Admiral from the El Facil battle recounts the sweetheart deal he got from Reinhard. As the one to present the plan to the disaffected military men, he could only wish to see their faces when their so-called honor and morals come crashing back down as predicted by Marquis Reinhard von Lohengramm. 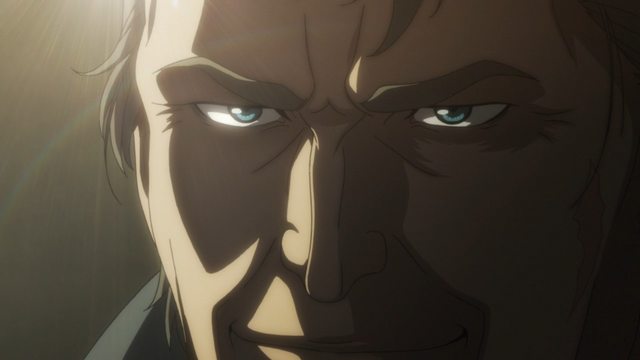 This episode is where we start the actual meat of this season. The dual civil wars raging in both the Empire and Alliance. For the Alliance, this is why the series is so timeless, as it is a critique on democracy that is done properly without pointless posturing. For us Americans, civilian control of the military is sacrosanct, no matter what political agitators and pundits like to argue and exclaim. But I doubt the United States, or any nation in our modern era, could hope to find itself in a war lasting one hundred and fifty years like the Free Planet’s Alliance and the Galactic Empire has been in. 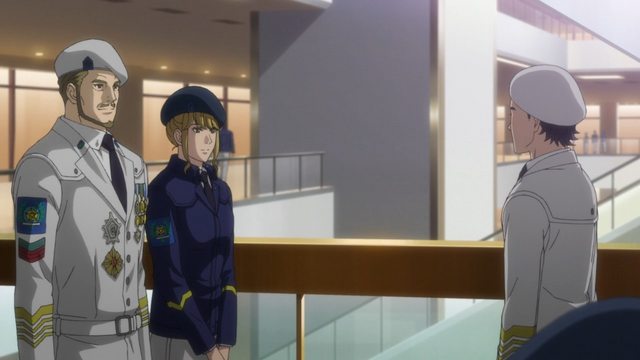 I can only imagine that at some point, war becomes less about survival and victory but becomes more of a crusade of ideals and the back-room machinations. Supplementary material and comments in the OVA and series note that it is the common man and woman who suffers the most in this protracted war, while the children of the Imperial nobility and Alliance elites are given cushy jobs. Those who prove themselves boisterous in upholding whatever high command gets all the spotlight.

I think this is why the OVA is still better, as it manages to animate the rot in both the Alliance and Empire. And also shows the absolute allegiance to the ideals of republican democracy and freedom Yang has, as well as the ruthlessness Reinhard has in dealing with the inbred nobility. 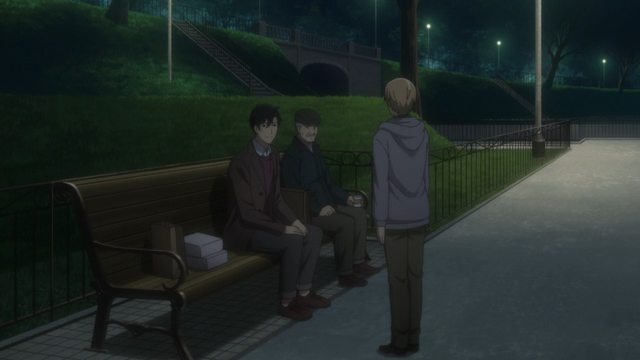 Getting back to this episode, the long war, with their terrible defeat in what many of the military men see as a result of the war hungry politicians who were safe at home was the powder keg ready to explode. Reinhard just found a lit match cord to toss into it. What better cord to use than the highest-ranking Alliance prisoner they had, one who holds seething personal grudges after those men who he considered the ones who offered him up to the Empire? Rear Admiral Lynch only had to find the right players and nudge them to dance Reinhard’s minuet. 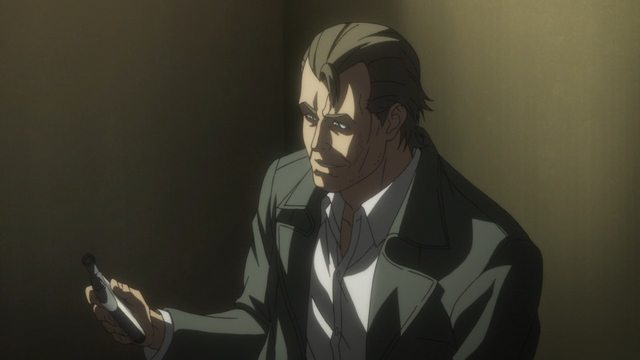 And no one, not even an astute an observer as Yang Wen-li and his allies, could’ve hope to have seen the coup originate with Admiral Dwight Greenhill. 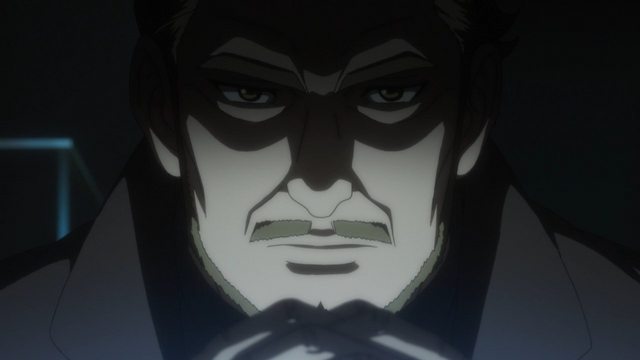 In the County of Mariendorf, Hildegard von Mariendorf is a peculiar woman. She abstains from the proper activities of a courtly lady and is more invested in the health and wellbeing of her county as well as her father. Deducing what exactly bothers her father, she manages to steer him into moving his begrudging support of Duke Braunschweig to one being allied with Marquis von Lohengramm. 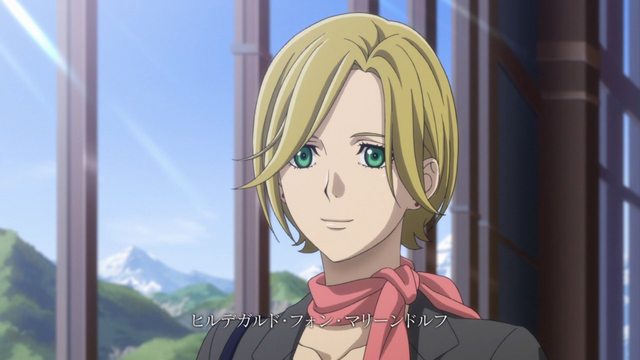 Meeting with the Marquis, she pledges the Mariendorf name, as well as other unaligned nobles, to Reinhard’s cause, having correctly deduced his intention to come to blows with the Duke and his allies. The only thing she asks from Reinhard, apart from winning the war and bringing about a new age of prosperity, is that he issues an official document that allows her family (and others who join his cause) to keep their land and territory. 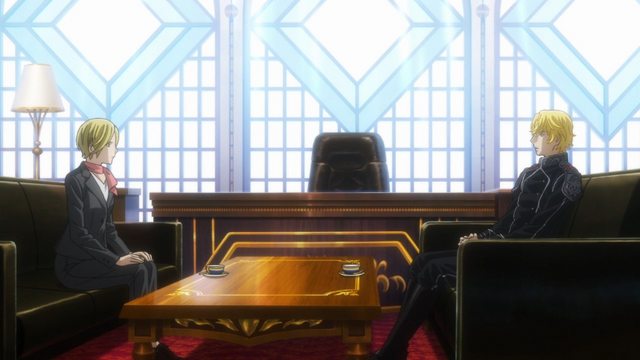 As if on cue, Duke Ohto von Braunschweig and Marquis Wilhelm von Littenheim along with their allied nobility form the Lippstadt Noble’s Coalition, an alliance of nobles opposed to Reinhard and Marquis Lichtenlade. With an overall greater number of forces available to them, many in the coalition is assured of victory. 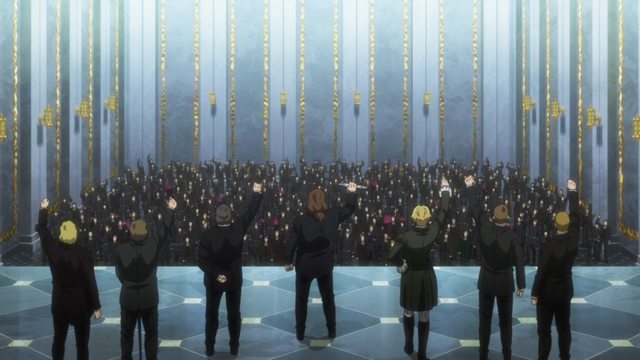 One noble who declines to join, even after personal invitation by High Admiral Ovlesser, is the former Imperial Navy Commander in Chief, Gregor von Mückenberger. Mückenberger warns his former colleague of Duke Braunschweig’s incapacity to see the truth past his upbringing as he rebuffs the invitation to the coalition. 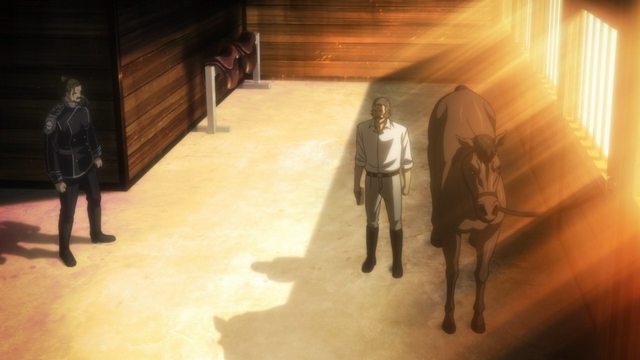 As the gathered nobles dismiss Mückenberger’s warning to Ovlesser, they do settle on the need for a specialist to handle their forces. Duke Braunschweig lured the reluctant Admiral Wilibald Joachim von Merkatz to their cause by using his family against him. He reluctantly agrees with the stipulation that they follow military regulations. 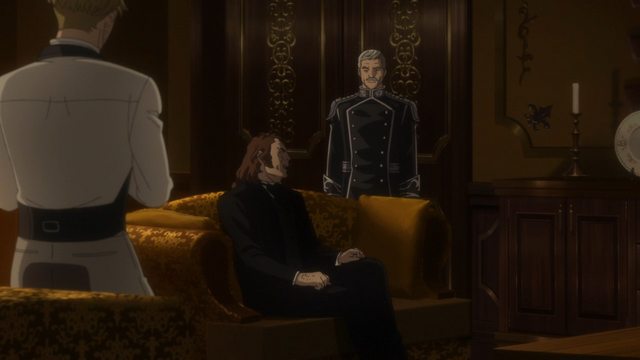 This was all a sham, a legal fiction as he would be the one that would be tugging the leash on the nobles. He writes to his family later that night in what would be his last correspondence to them, having known of the rot infesting the Empire since coming into contact with the common soldier under his command.

Back at Duke Braunschweig’s villa, two of his military advisers suggest assassinating Reinhard. Admiral Arthur von Streit is arrested for his cowardice while Captain Anton Fellner, having kept his mouth shut and not argued with the Duke, takes independent action and leads a force to take Reinhard’s sister, Annerose, hostage. 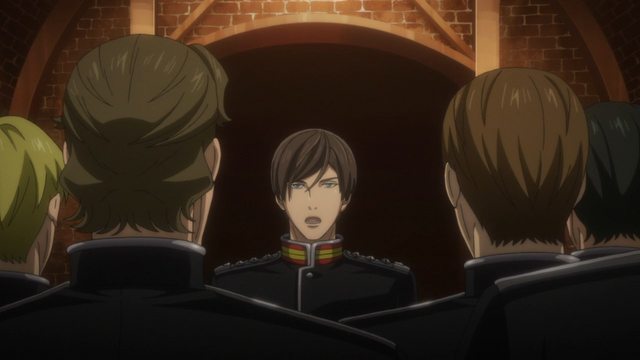 Unfortunately for Captain Anton Fellner, his move was anticipated and his ploy failed. He then pledges his allegiance to Reinhard and put under Overstein, having deduced the possibility of the Coalition’s success after his failure. 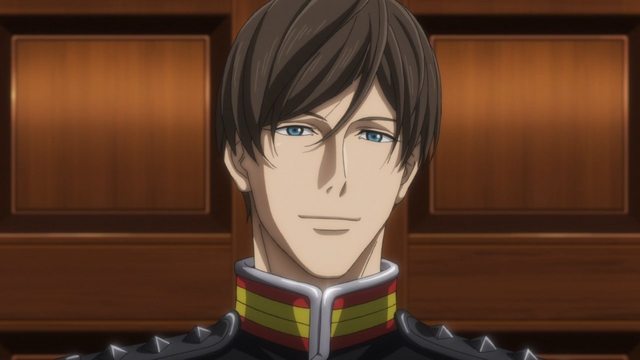 Duke Braunschweig and Baron Flegel flee Odin at the behest of the Duke’s advisor, Commodore Ansbach, noting that they could be set upon by Rienhard at any moment due to Captain Fellner’s actions.

Meeting with his Admirals, Reinhard launches his move. His admirals take control of various ministries and ports, capturing nobles who didn’t manage to flee. They capture Admiral Streit as well, and granting the man some leniency even though he knew of his advice to the Duke. Streit kindly turns down his offer of safe passage back to Duke Braunschweig as well as the offer of joining Reinhard. Streit instead preferred to remain on the Imperial Capital of Odin, knowing the kind of man the Duke was as well as his loyalty to such a man. 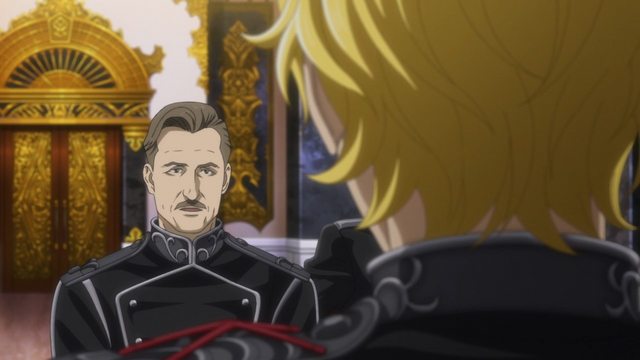 Granted the title of Imperial Fleet Command in Chief by the child Emperor Erwin Josef II, Reinhard embarks on his campaign against the rebellious nobles, ingloriously giving them the moniker ‘traitors’ for official posterity. 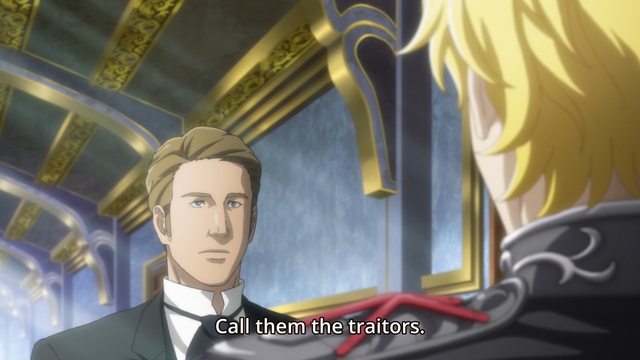 Compared to my summarization of episode 15, episode 16 is much lengthier just because there is a lot to cover. Unlike the Free Planets Alliance, the rot was a dirty secret known by many. The high nobles have long paid lip service to the Goldenbaum dynasty and the institutions of the Galactic Empire, getting rich and fat in their carefully manicured gardens. Some nobles know of this but number too few to openly defy the dance they’ve stepped to for generations. 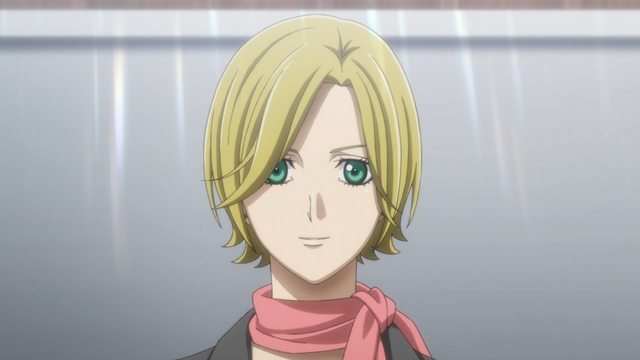 Not until of course, a low-born noble would be elevated to high status having not danced that dance. Elevated for being the relative of the last Emperor’s final concubine and through his merits and achievements in the battlefield. The same 150-year war that led to the resentment that was bubbling under the surface in the FPA. 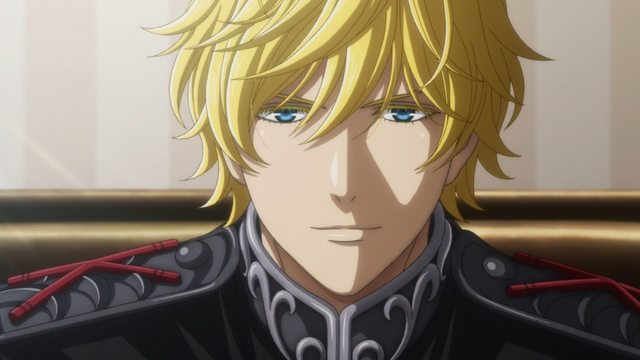 Seizing his opportunity with the reluctant alliance with some of the old guard and support from nobles with the clarity to see the death spiral of the Goldenbaum Dynasty, Reinhard used Braunschweig and Littenheim’s fears and ambitions against them. With their open rebellion against the Empire, no matter how well they manage to hide it under the guise of ‘saving’ the Empire, they are traitors. 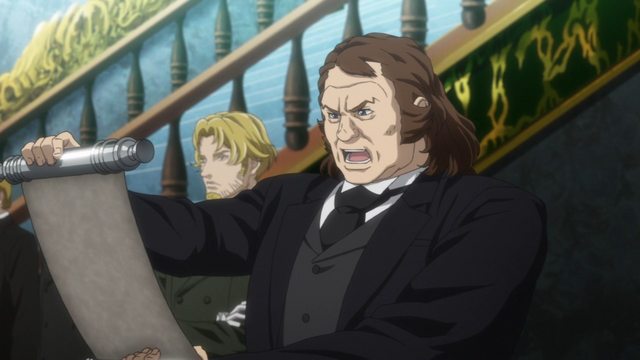 Now, in the OVA, Reinhard calls them the ‘Rebel Fleet’, which is significant. A blow to their worthy cause being compared to the FPA which the Empire has called a rebellious territory or rebel forces. I understand the change to traitors, namely because that’s who they are, but also it doesn’t require one to have read the light novels or manga to understand. It’s one of those small changes that I can get behind on. 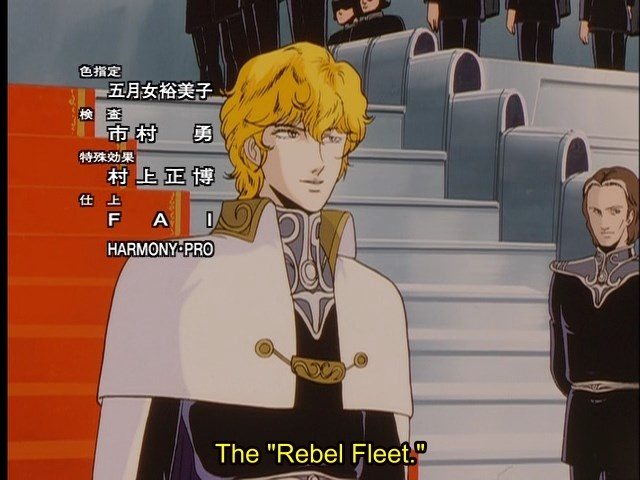 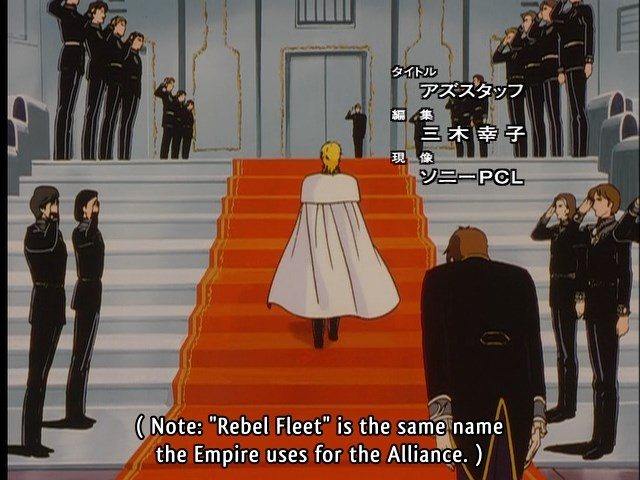 All in all, the episode manages to add a bit more gravitas and character to the sides forming in the civil war. Between the high brow nobles who only wish to retain the riches and privileges of their birth, and the ambitious and admirable of the lesser and unaligned nobles who saw the death spiral coming and now have an avenue to save the Empire through Reinhard. 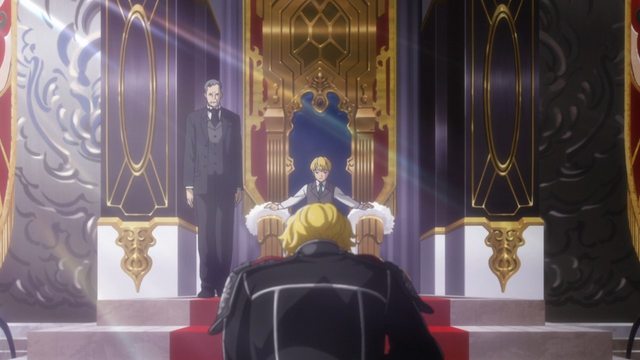 Even if it means killing it in its current form.

I want to get back to a dead horse I’ll be beating over and over: the lack of timestamps. Frankly I shouldn’t be concerned about its omission. As Sumeragi put it, the series puts more faith in the viewer picking up clues from what is presented rather than being told outright by the narration or a subplot. It helps speed things up overall but my fear has always been that it’s speeding things along too fast. 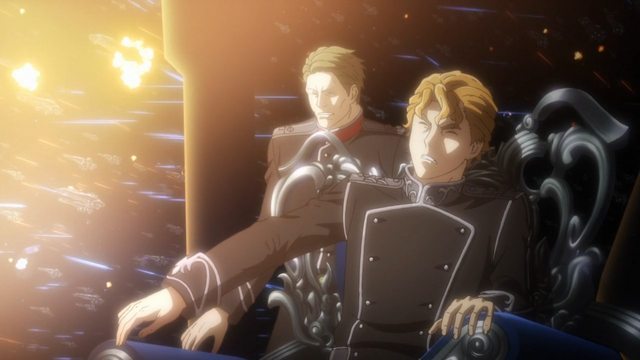 I’ve gotten used to the bishiefication of our beloved characters, the changes in mechanical designs on the ships and general updating of the props and much richer use of color than before. But I’m still not used to -not- being given an actual hint that a battle is dragging on for 48 hours. Or that it takes three or so weeks to get from Heinessen to Iserlohn. 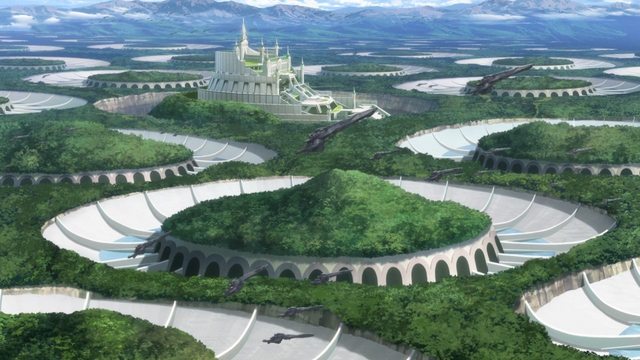 And it’s this reluctance of the pace the anime’s going that I’m also going to praise the pace it’s going. Confusing yes, but I praise the cutting of fat from the narrative. It leaves enough for the viewer to understand, to ‘read between the lines’ as it were. There is less need for constant narration to explain the motives and ideals behind the man, as more character is placed into the key players rather than spinning them off to one-off or barely recurring characters. 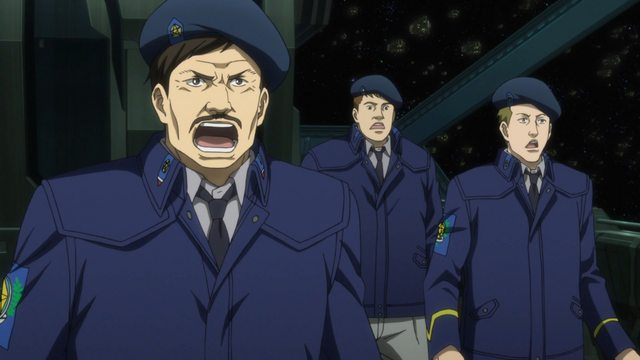 Something I can look back and see the OVA has done. I imagine it’s the benefit of several decades of story crafting improvements that’s enabled this, and it’s one of the reasons that I’ve gone and grown warmer to the reimagined series as a whole. I still prefer the OVAs for what they are, but much like the 2017 iteration of Kino no Tabi, I can appreciate this as its own entity. 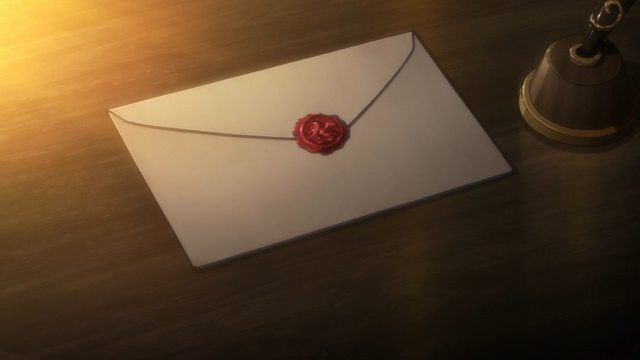