A whole month has gone by and the last thing I posted was my thoughts on the VCDL’s rally in Richmond. So let’s at least cap it off with episodes 19 and 20 of Legend of the Galactic Heroes: Die Neue These.

The Yang fleet heads to establish its supply lines in the Shampool system. He also reveals that Space Force Commander in Chief Admiral Bewcock had tasked his fleet to quell the uprising. Talking about his newfound fame, Yang notes that the Yang Wen-li he aimed to be and the Yang Wen-li before Julian are two different people sharing the same name. Yang is unwilling to be the subject of historians, but to be one himself. 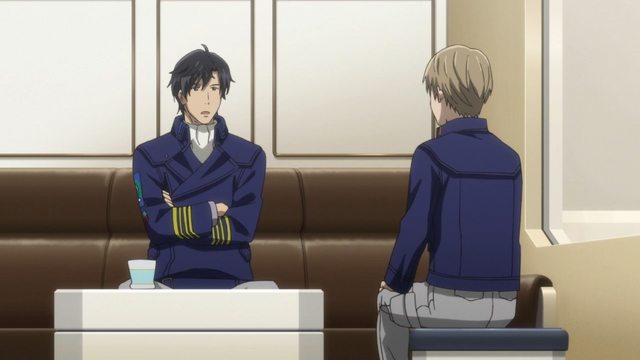 The assault on Shampool was primarily a ground battle. The understrength traitor garrison was quickly defeated by the Yang Fleet’s detached infantry, the Rosen Ritters under Schönkopf. While Schönkopf was being showered with praise and kisses by the grateful inhabitants of Shampool, a defector from the Department of Intelligence, Commander Bagdash, had arrived and pledged his service to Admiral Yang after providing information that the 11th fleet was enroute to fight Yang’s fleet. 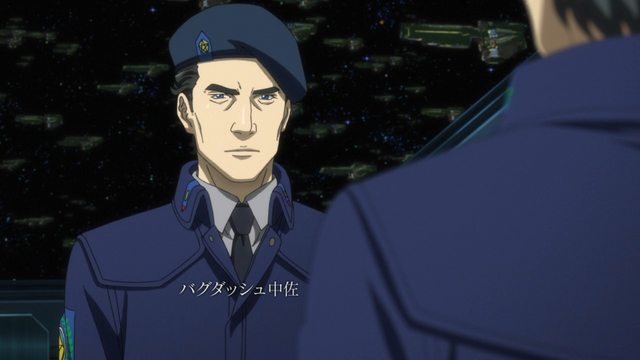 When inquiring about Jessica’s whereabouts, Yang lies and tells him she was left behind in Iserlohn. Sensing foulness afoot, no one really trusts him and they manage to dispose of his services before the battle with 11th Fleet. Having drugged him with a long-term sleeping drug. 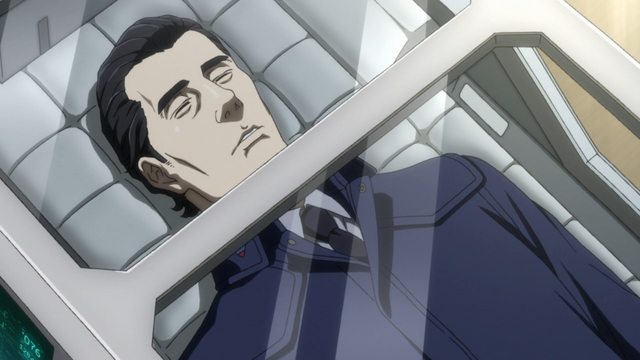 The 11th Fleet, deprived of their trump card in the form of Commander Bagdash, the Yang fleet is able to confirm Bagdash’s information and effectively fight the 11th Fleet. While Admiral Lagrange had ordered his men to surrender, his patriotic zeal was echoed by his command and the losses incurred by the 11th Fleet was total. 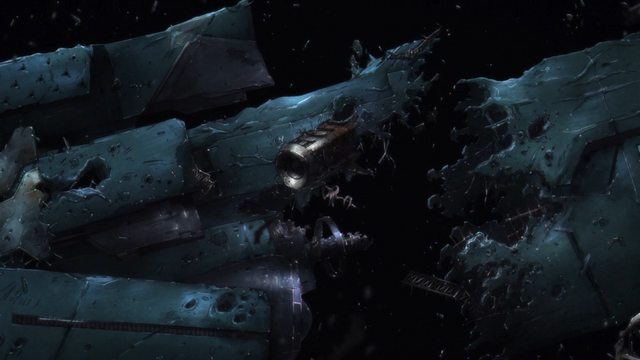 Commander Bagdash once again offers his services after explaining his reasoning to come to his camp as an assassin. With the coup more or less on the wrong side of history, he changed his views and Yang returns his sidearm to him. Bagdash points his gun at Yang, but does not fire. Having put it away, he turns to see Julian pointing his own sidearm at the still untrustworthy man. 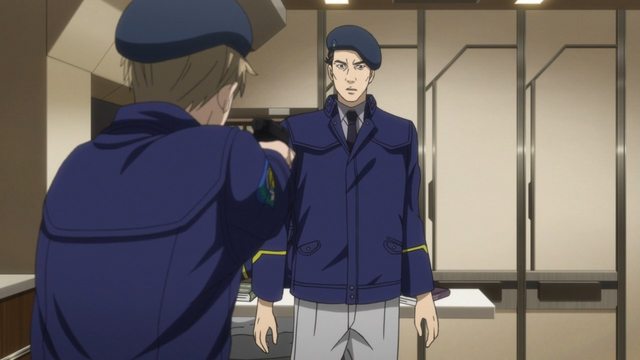 Yang talks Julian down, and dismisses the Commander. He states that as long as he continues to win, Bagdash won’t turn on him.

Back on Heinessen, citizens gather in a stadium to protest against the National Salvation Military Council. Riot Police under the command of Captain Christian arrive to try and disperse the crowd. Captain Christian berates the assembled for clinging to the rights that were suspended under the NSMC’s martial law. 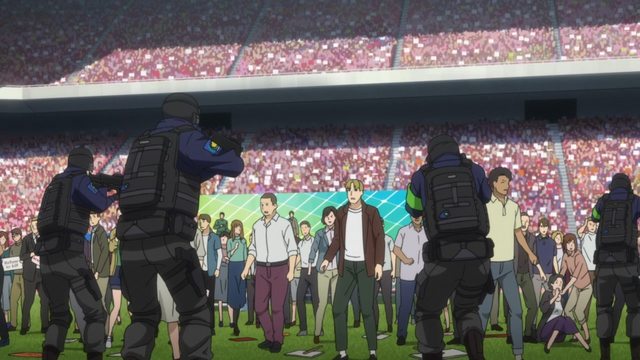 Taking 10 people to the center stage, and starts to beat them asking if their leader was Representative Edwards. Confronting him, he states that the NSMC is the sole arbiter on what ‘order’ is and is here to disperse the rally. Unwilling to watch yet another person be beaten, Jessica tries to restrain the man but is beaten for it. 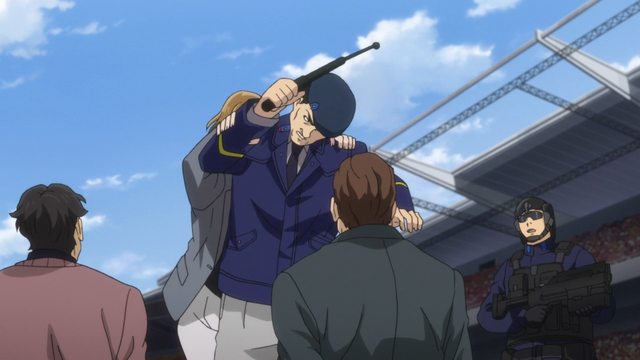 Told that none were brave enough to die, Jessica points out that Captain Christian and his co-conspirators in the coup are just following in the footsteps of a man once known Rudolf von Goldenbaum, though rather poorly. Enraged, Christian kills Jessica with a strong blow that broke his baton in half. 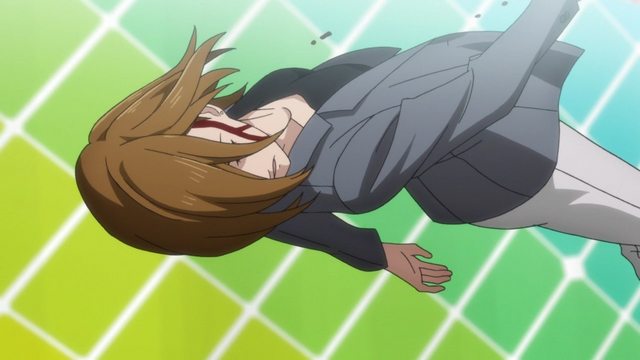 As Jessica is killed, the crowds rush the NSMC, producing their own weapons or taking it from dead NSMC troopers and the rally turns into a full-scale riot that caused the deaths of 20,000 civilians and 1,500 troops. 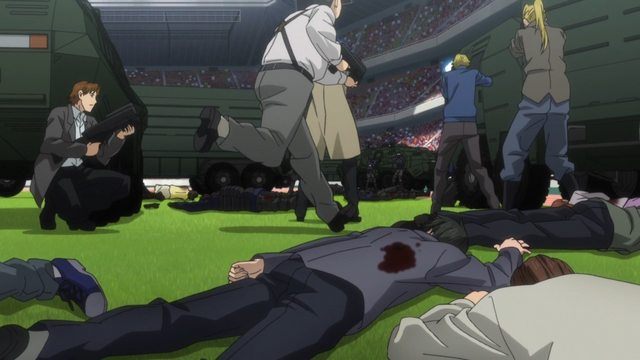 In what would be known as the Stadium Massacre, all popular opinion of the NSMC has fallen. When news reached the Yang Fleet, Yang wore sunglasses to hide is expression, noting that of his friends, he was the last one left. 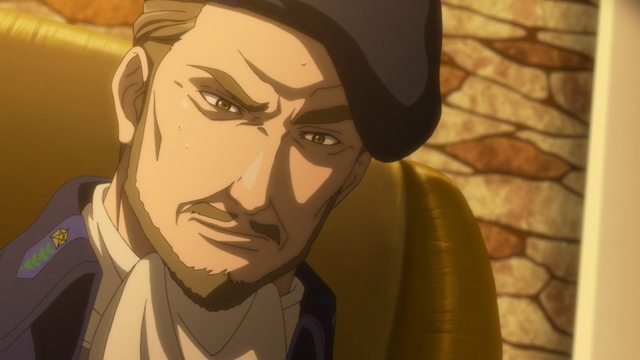 I wanted to touch mainly on the last end of the episode, of the Stadium Massacre. It’ll be a bit political as Yoshiki Tanaka had written these books as a sort of critique of republican democracy. I wasn’t born when Marcos instituted Marital law on the Philippines but I’m quite sure that the author had taken some clues from it. Though if anything, it is a critique of what happens when the military becomes too sure of themselves that they can circumvent civilian rule. This is a subject that is tricky to address as many people would find themselves often facing ire from civilians or military if they speak against one, the other, or both. 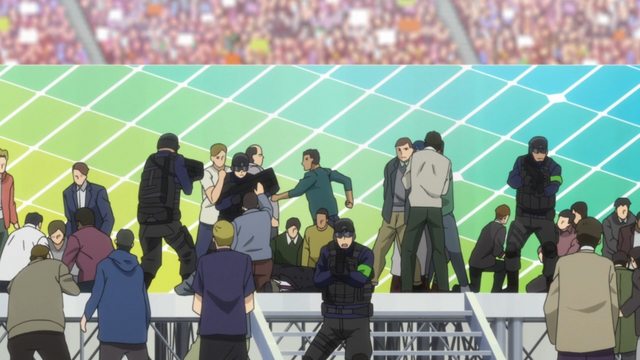 Personally, considering the length of time the FPA has been around, the rot has pretty much started before this point, a long, multi-generational war of survival also would have an effect on things. As much as the Cold War can be cited as a real-world example, apart from proxy wars in East Asia and the Middle East, nothing really went hot.

So, seeing Captain Christian stride into the rally and start to beat attendees was a bit of an over dramatization, and also a warning. A nation cannot survive without its military, especially against an outside threat. But ignoring the rights of your citizenry is one way to hobble your own cause and eventually, weaken the nation. 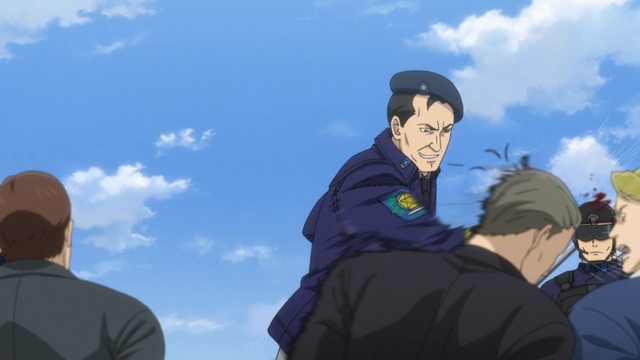 I think this is an example of where an update in animation but keeping with the overall plot truly helped the series.

The shift changes once more to the civil war within the Empire. Reinhard informs Kircheis that Littenheim is off to attack his force. Kircheis was sent off to subjugate frontier zones and bring them back into the Imperial fold and Littenheim believes this to be a chance to seize some glory away from his rival. 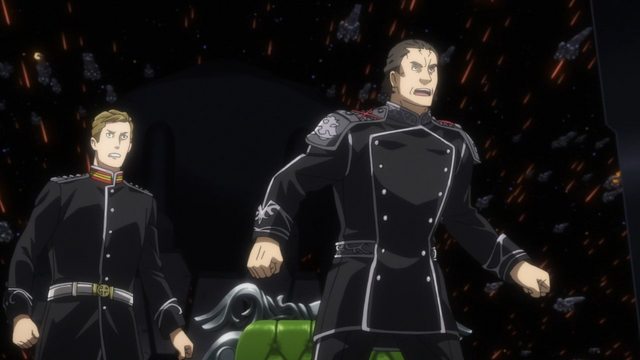 Admiral Kircheis easily defeats Littenheim when they do clash. Littenheim is seen opening fire on his support ships in order to escape. Konrad Rinnesall survives this backstabbing and offers to act as a propagandist for Kircheis. He isn’t needed though as someone else beat him to it. 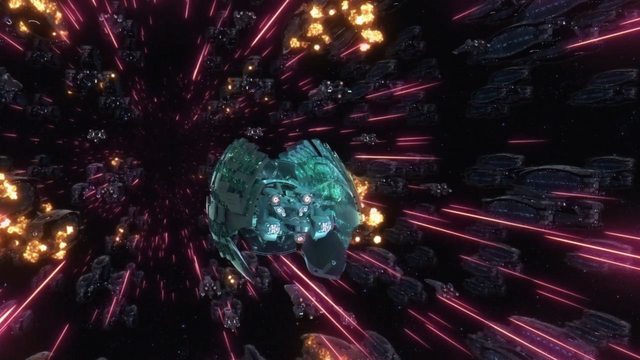 Littenheim is killed in his fortress’ command center when another of his subordinates who he attacked to make his escape confronts the cowardly man. His guards shoot him, only for one to realize too late that he was bathed in Seffle particles. The ensuring weapons fire explodes the volatile gas, taking the coward and the rest of the command center. 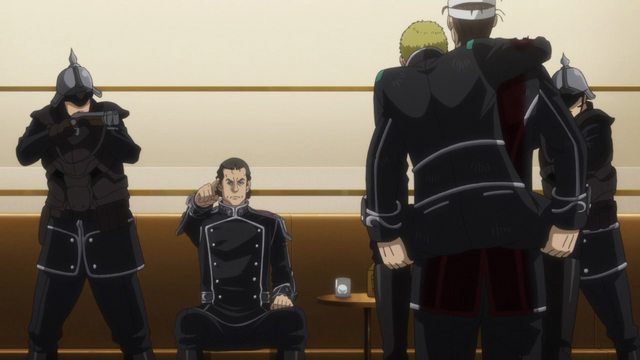 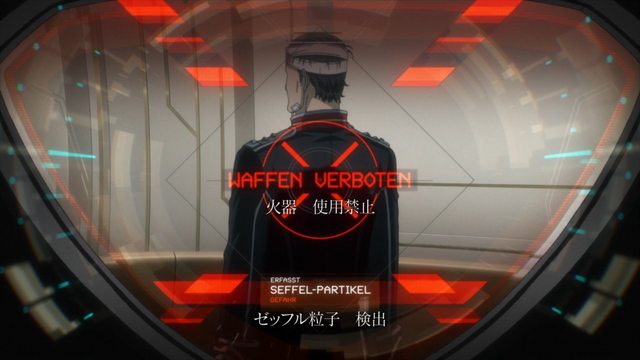 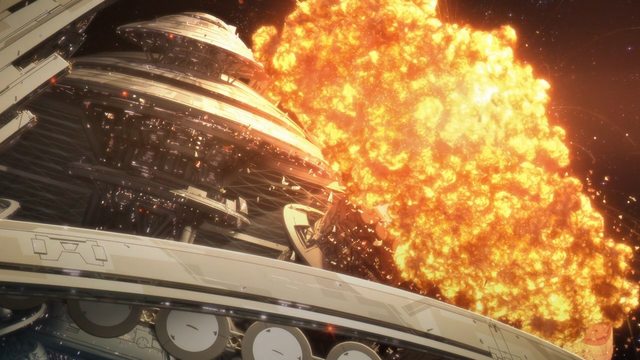 Back around Geiersburg fortress, the Rebels and Imperial Navy continue to have battle after battle, though it seems as though Admiral Merktz’s position as commander in chief of all military affairs has been upheld for now, as the noble led fleets continue to abide by his orders. Oberstein notes that he was already a noted officer before Reinhard was born, and it would be prudent to keep him from effectively commanding the nobles. 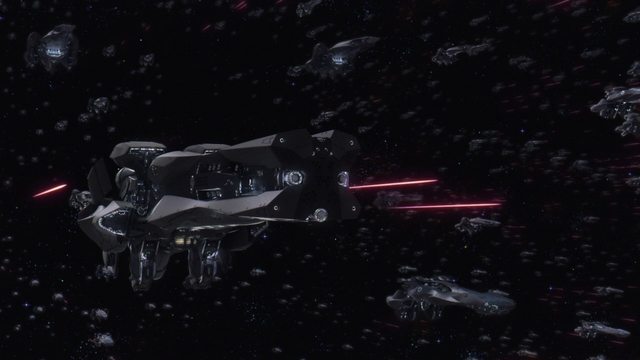 Reinhard issued a personal challenge meant to poke at the Imperial Noble’s sense of honor, and Merkatz, knowing it was a ruse, orders them not to deploy. Flagel and his compatriots do however, and when Mittermeyer retreated from the battlefield, it inflates their already soaring ego. 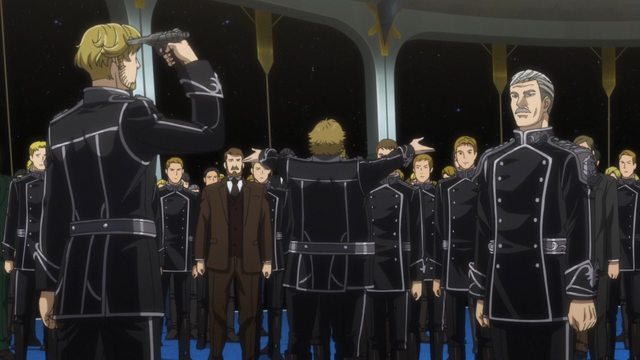 That show of the nobility’s sense of honor and dedication was coupled with the growing ambitions of Braunschweig upon learning of Littenheim’s death. A combination that made the nobles uncontrollable when Braunchweig uses his authority to undercut Merkatz’s orders. 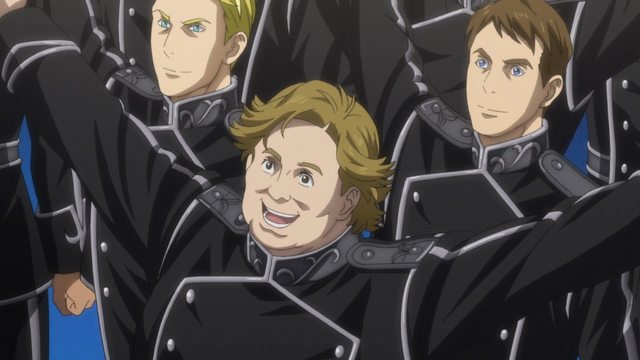 With the entirety of the garrison save Merkatz’s fleet out in force, the Imperial navy starts to systematically destroy the haughty noble’s fleet. The noble’s fleet close to destruction, Merkatz rides out with his fleet and covers their retreat, though he is cursed at for not coming to their rescue any sooner. 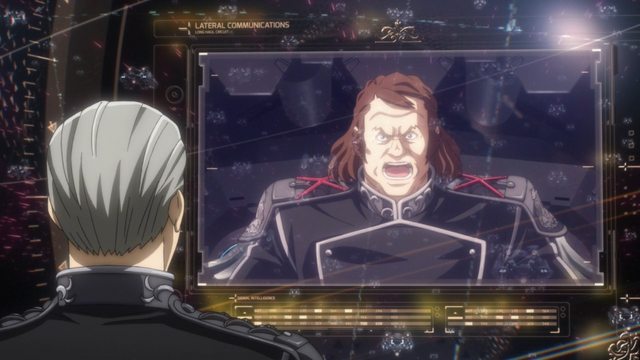 Merkatz calms his adjutant, noting that the Duke is a mentally ill man, cursed with a sickness of a half-millennia of noble privilege. Having retreated to Geiersburg fortress, Duke Braunschweig is informed that a planet under his own rule, Westerland, had revolted. In the ensuing tumult, Baron Scheidt, Duke Braunschweig’s nephew, was injured and died of his injuries. 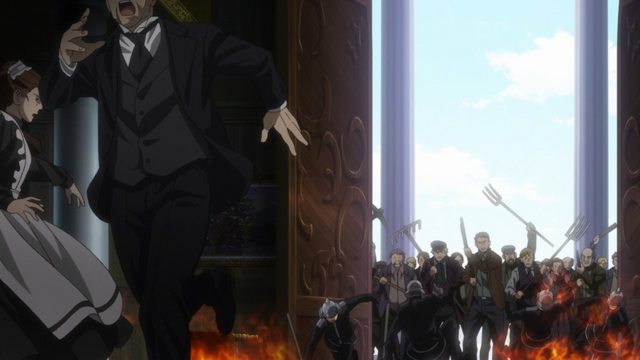 Already distraught at how close to death he was and seeing enemies everywhere, he orders a thermonuclear strike on his holdings, pointing out that as a planet he had direct rule over, he had every right to do what he pleased. Commodore Ansbach notes openly that this is the end of the Goldenbaum dynasty, which led to his arrest and imprisonment. 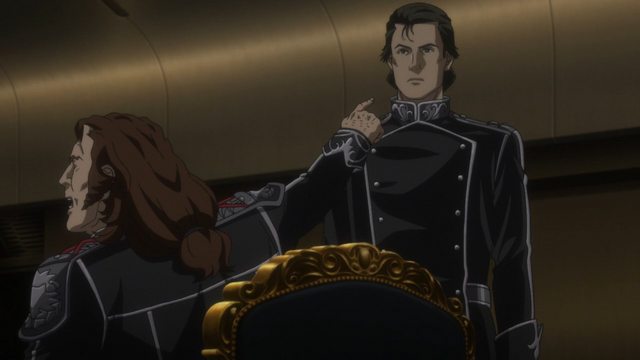 Oberstein informs Reinhard of the attack, but when Reinhardt moves to sortie against the fleet, Oberstein proposes to let Duke Braunschweig carry out his evil plan, forever turning the Empire against the rebellious nobles for daring to use nuclear weapons on a planet. Confronted with the fact a continued civil war would mean more deaths than just the two million on Westerland, it seems that Reinhard acquiesces to Oberstein’s reasoning. 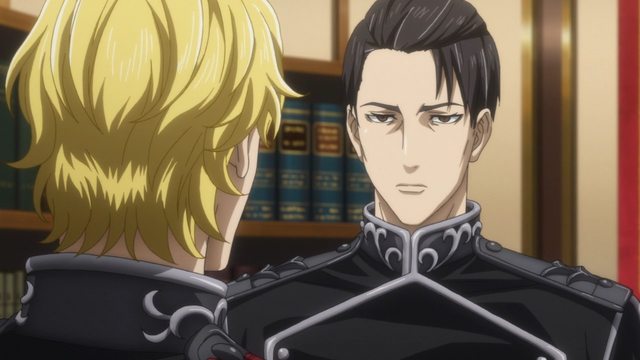 It is with that two million people who were looking to join Reinhard’s cause did so posthumously, and were more effective as a propaganda tool for the Empire and Reinhard with mushroom clouds covering nearly the entire surface of the planet. 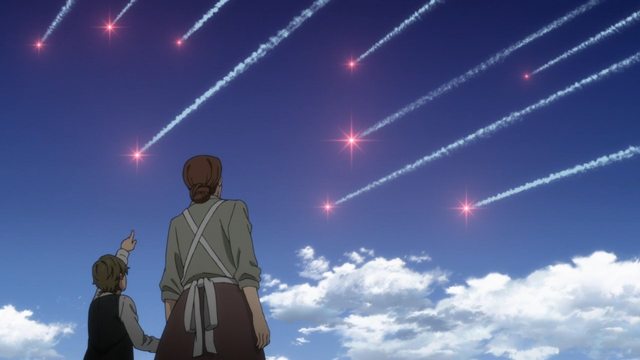 Back aboard the Barbarossa, Kircheis watches in dumbstruck horror of the images from Westerland. Vice Admiral Wahlen relays to him information of what a noble had told them when he surrendered: that Reinhard was informed of the strike but allowed it to happen for political purposes, the recon images are mere proof of that. Unwilling to believe this about his best friend, Kircheis orders a lockdown on all such rumors and information until he could meet with Reinhard to confirm the truth from him directly. 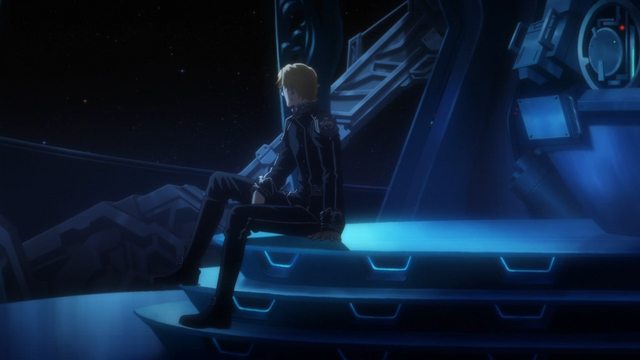 That certainly sped up the civil war. Whereas in the original anime the civil war between the Lippstadt Nobles and Reinhard von Lohengramm took a fair few episodes, it was all but done in about 20 minutes here, so there really isn’t anything I can add to it other than me thinking Merkatz stole that first 20 minutes. The sole voice of reason in an unreasonable party. 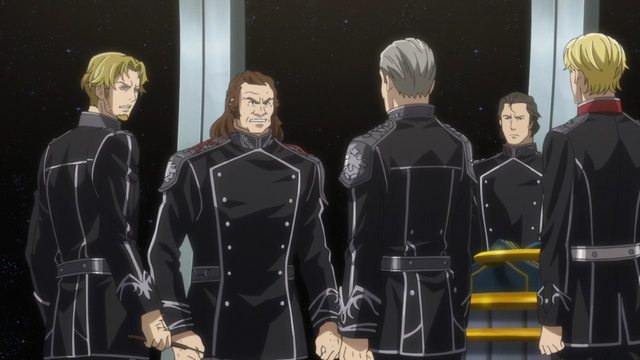 The one that I felt at odds with this episode is actually with the Westerland decision. While Duke Braunschweig’s decision was well animated, showing how perturbed and off his rocker he was at this point, there was none of the duplicity Oberstein used to get his way with letting the strike happen as in the OVA.

In the OVA series, Reinhard does send out a fleet but it never made it in time. Oberstein’s recon probe does arrive on station to record the gruesome aftermath, there really isn’t that from the Die Neue These. While I’ve praised this adaptation for devoting time to monumental decisions, I’m not fully onboard with this one. I have also come to understand that DNT is flying closer to the source material than the OVA ever allowed for. Reinhard’s decision to agree to the cold calculative move and then trying to justify it later occurred in the novels as I’ve been informed. 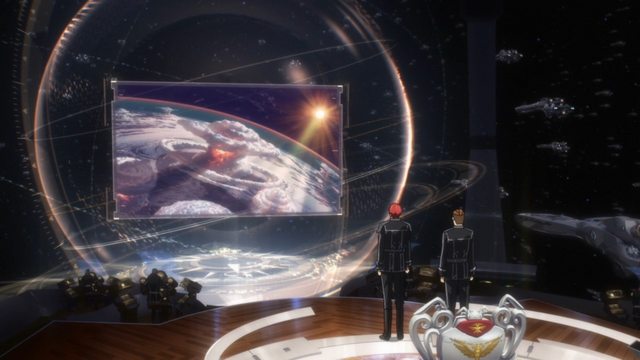 Which strikes me odd as someone who prefer the OVAs. This does make others who are more derisive of the reimaging to really be put off with it but I’ve just let it happen truth be told. The OVA is a relic of a bygone era and in the current anime industry, might not be as profitable.

It isn’t some shonen show that can get endless season after season and omake and redos. It’s already particularly niche in it’s genre in an industry that is starting to see science fiction lag behind isekai. It’s much like the Taiga drama as I’ve been shown. High production values, declining viewership. It is due to this change in the anime viewer that brought about the faster pace, focusing on Yang and Reinhard, and staying with larger monumental shifts.

So for better or for worse, we get a Reinhard who wholly agrees with Oberstein rather than one being duped by mechanical eyes. 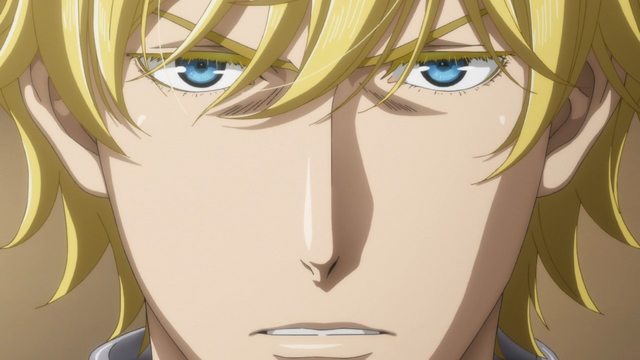 Inb4 I get cancelled for that sentiment.